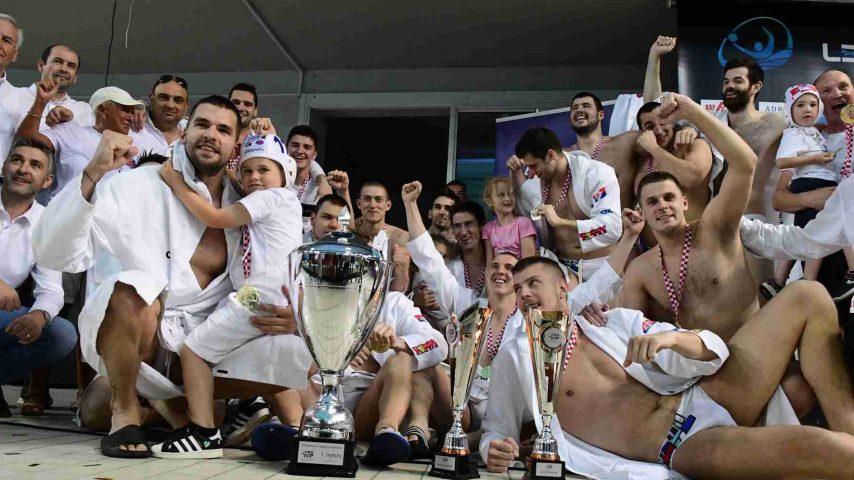 Jug Dubrovnik returns to the throne. Jug defeated Jadran Split in a dramatic fourth match in the final – 10:9 (after a penalty shootout) and clinched its 17th title of the Croatian Champion.

The fourth match was a low-scoring thriller. Only nine goals were scored in the first period.

The spectators in the Gruz pool witnessed an exciting finish. They saw three goals in the last 103 seconds. In dying minutes, Jadran Split scored two quick goals and turned around a 4:5 deficit to a 6:5 lead. However, nine seconds before the end, Jug leveled at 6:6. The match entered a penalty shootout. The visitors missed the target twice in the shootout and Jug celebrated the new title.

Jadran scored an opening goal after only 22 seconds of the match. Jug responded with two and gained a 2:1 lead. At the first break, the hosts had a 3:2 advantage.

Jadran’s captain Andjelo Setka equalized from a counterattack (3:3) in the first minute of the second quarter. However, it was the last goal in the first half.

The third period started in the same way as the 1st and the 2nd quarter – Jadran netted an early goal. Luka Bukic gave the hosts a 4:3. Still, Greeks Stylianos Argyropouls and Konstantin Kakaris put Jug in front – 5:4.

Konstantin Kakaris scored the 5th goal for Jug in the 22nd minute. After that, defenses dominated. Goalkeepers Toni Popadic (Jug) and Ivan Marcelic (Jadran) were up to the task (Popadic posted 15, and Marcelic 11 saves this evening). There were no goals for almost ten minutes. A minute and a 43 seconds before the buzzer, Konstantin Kharkov broke the deadlock by converting a man-up for 5:5. Interestingly, it was Kharkov’s first goal in this season’s final. He didn’t find the net in the previous three games.

Rino Buric netted for 5:6 with 35 seconds left on the clock. Still, Jadran couldn’t keep a minimal lead. Hrvoje Benic scored from a distance to level at 6:6 with nine seconds to go.

As for the penalty shootout, there were no misses in the first three rounds. Jadran’s Delic and Marinic Kragic hit the post. The hosts’ made no mistake and won the title.

Since 2016, Jug has won six titles in the Croatian League. It failed to reach the throne last year when it lost to Mladost in the final. In 2021, the last match of the final ended after a penalty shootout, just like this year, but Jug was a loser a year ago.

This season wasn’t unsuccessful for Jadran, as it won its first-ever Croatian Cup.

More news about water polo in  Croatia, Serbia, and Montenegro