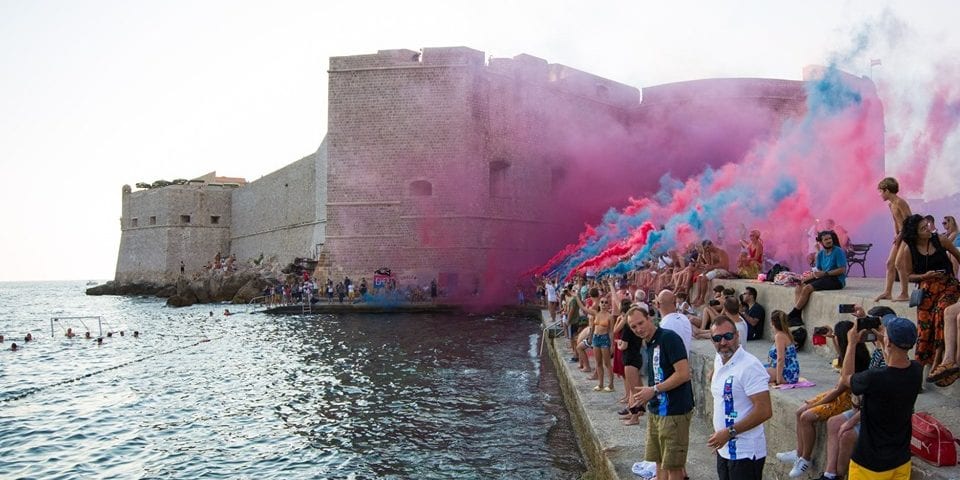 In June 1924, Jug defeated Water Polo Club Penatur 3:0 in its first game, played at the Porporela dock in Dubrovnik.

A friendly encounter between VK Jug and Water Polo Club Porporela was staged at the Porporela dock a few days ago, as a part of the jubilee. Porporela narrowly beat Jug 9:8. However, the result wasn’t important, but the celebration of the tradition on the location where all began 95 years ago.

-It is a great honour for us that Jug accepted our invitation and that we had the opportunity to host Jug’s senior team. The history of the club started here, so the logical sequence was to make the celebration in the same place. Next year, we celebrate 70 years since Porporela won the “Wild League (summer amateur competition in Dubrovnik) for the first time back in 1950. We want to convey that spirit to the younger generations, and bring them to Porporela – said Giorgio Knego, President of the Porporela Association.

Jug, one of the most successful water polo clubs in the world, has clinched 64 trophies in national and international competitions.

The match played at Porporela was just a part of a big celebration which integrates history, sport and art.

The club recently began the celebration of its jubilee, by realising the monograph “Five to 100”, written by Zeljko Konsuo.

A big chapter of the monograph is dedicated to the artists who were inspired by water polo in their work. That was how the idea of linking the sport and art was born.

From the very beginning, the symbiosis of Jug and Dubrovnik was evident.

The club decided to go one step further this year and cooperated with Dubrovnik artist Iris Lobas-Kukavicic who redesigned the Jug’s sports equipment and clothes for the upcoming season. The city of Dubrovnik is the central symbol of the new equipment. Kukavicic’s graphic solutions blend in perfectly with the story of the city and water polo.

As the highlight of the whole celebration, the first water polo museum will be founded in Dubrovnik soon. The museum will unite all the sports achievements of the most celebrated water polo club in Croatia. The museum will present the club’s rich history, trophies, medals, and will have a modern fan shop in which the collaboration with Iris Lobas-Kukavcic will be continued.

-We are sure that this cooperation will delight all fans of the arts and sports. The ‘incompatible combination’ of sport and art glorify the Dubrovnik tradition, which prides itself on its long-standing water polo history – said Tomislav Dumancic, Jug president, for the club’s website.

Dumancic added:
-We are also proud of the first water polo museum that is under construction. We want to bring the visitors closer to the history of water polo in Dubrovnik and show why we are the most successful club. The club will exhibit 64 trophies in the museum that it has won in its 95 years, which is something that few can boast. The club will continue to work for the benefit of the community. We will invest not only in new generations but also in projects that will benefit the community as a whole, such as the museum, so that we can return the favour to our citizens for all the years they have followed and cheered us on.

In the year of jubilee, Jug changed its general sponsor. The new sponsor will be Adriatic Osiguranje, which replaced Croatia Dubrovnik, which was the club’s sponsor for 15 years.

The new season for Jug begins on 21 September when the team, coached by Vjekoslav Kobescak, will host Budva in the first round of the Regional League.