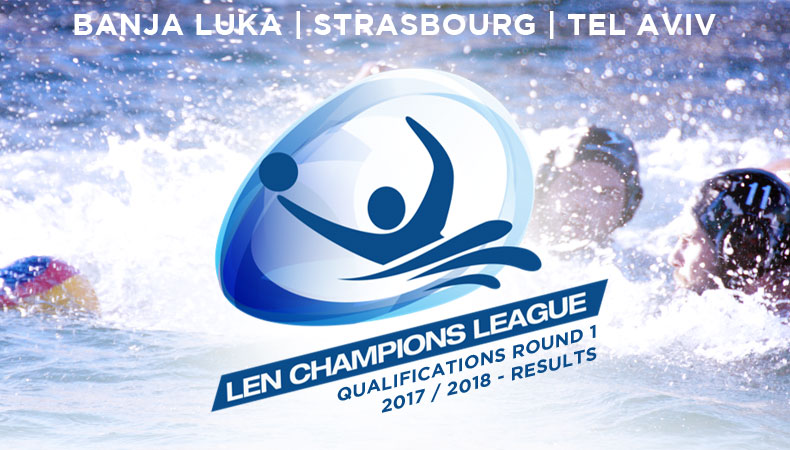 The LEN Champions League qualifications have marked the kickoff for the international water polo season 2017/2018. 13 teams fought for 6 places in the second qualification round on three sites (Tel Aviv, Banja Luka, Strasbourg) over the course of the weekend. While early in the season, we were able to already see some great plays and performances from many teams.

The two best teams from every group move on to the second round of the qualifications for the LEN Champions League 2017/18, held in Zagreb [flag=hr], Budapest [flag=hu], Sabadell [flag=es], and Oradea [flag=ro] from the 28th of September to the 1st of October 2017.

For a detailed breakdown of all games and results, check out the MIKROPLUS – official timekeeper’s results page.

LEN made an effort to promote the sport among smaller water polo communities by electing new sites as hosts for this years first round of qualifications. Find out what athletes and coaches from the tournament in Banja Luka had to say about this move below. 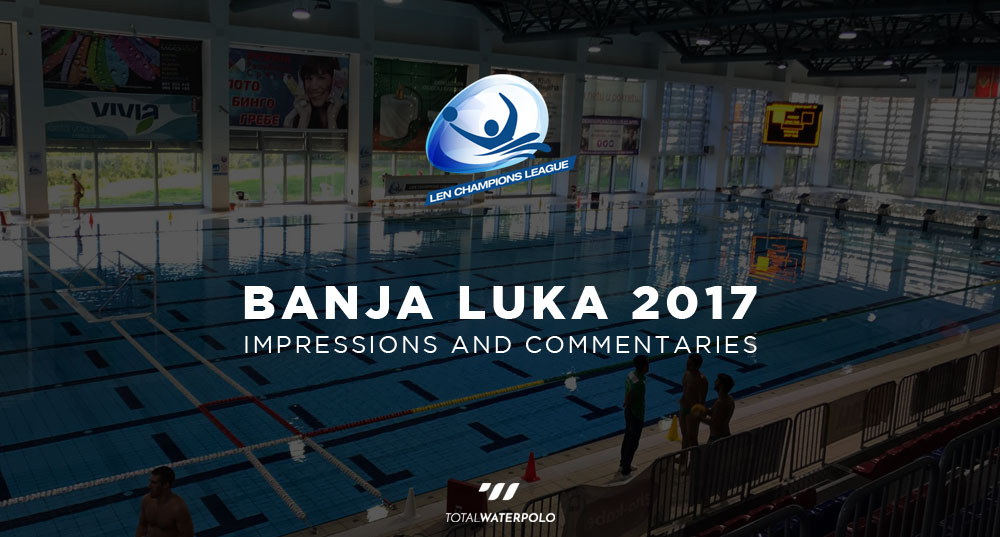 This weekend we experienced the first step of LEN’s effort to bring high tier clubs and matchups to lesser water polo hubs and promote the sport to a broader audience. Some results, of course, show the difference in play and skill that was to be expected with young, semi-professional teams facing well-established clubs from strong European leagues.

As for last years champions of Bosnia and Hercegovina, Banja Luka was one of these young teams who welcomed well-established clubs to their home turf. With three major clubs (OSC Budapest [flag=hu], Sintez Kazan [flag=ru], CN Terrassa [flag=es])and two aspiring clubs (VK Banja Luka [flag=ba], CF Portuense [flag=pt])  the tournament in Banja Luka featured the most matches. Total Waterpolo talked to the hosts and participants about their impressions, the setup, and their future expectations.

With Banja Luka facing CF Portuense, we had the matchup between two young, aspiring clubs, that ended in a 10:5 victory for the Portuguese guests. After an interesting game, we were able to get some insights from the hosts and their guests about the match and the weekend as a whole.

A quick question about the match, what was your experience?

Matchups against teams, which are definitely better established and more organized than us from a financial point of view, are what they are. You get to play as much as the opponent allows you to, what has been the case throughout the last few days.

The Portuguese were a team we could have definitely taken on, we played for the first time on this stage, I hope that we will return much stronger next year. This will be a big motive for our young players to train with even more effort.
We have to add more gym workouts among other things and are hoping to get a bigger budget for next season, so we can bring one or two enforcements for the euro league to the team, then we will have a different picture.

Right now hope to be hosts to the first round of the Champions league qualifications again in 3-4 years. Then we will see how much this has helped us, how much we were able to learn and how far we have improved. We will definitely be the champions of Bosna and Hercegovina for the next 4-5 years, so we have no doubt in our participation. The difference in skill we face against these teams from Russia, Spain, and Hungary is the same difference other Bosnian clubs face against us. We will try to keep this gap up while slowly approaching the European stage.

It all depends on the budget though – it is naive to believe that a team without any financial benefits or scholarships for their players can go up against teams where athletes play their sport as a profession, earning our annual budget in a month, spending 6 to 7 hours a day on it.

The organization of this tournament, as well as hosting teams of this caliber, will definitely help to attract young players, which will be able to add human and financial value. How do you view the move to spread this level of the champions league among smaller water polo communities?

That was exactly our goal, we know very well what we signed up for. We did not come here to defeat anybody, we are not that unrealistic. We wanted to generate a public interest for water polo in Banja Luka and move the club up into the first category of sports within the city, where, as champions of Bosna and Hercegovina, it definitely deserves to be.

I hope that our and our young athletes’ effort will not go unnoticed and that the city will stand behind us even more, resulting in more achievements.

And to the youngsters out there: Practice a sport. Water polo is a great option as it doesn’t promise big financial gains, which allows you to focus on your education as your top priority while maintaining a healthy lifestyle.

For the parents – every hour spent in training is an hour away from the screens, which in today’s time is of great benefit to the kids.

A little bit about the match – what were your expectations, what about the outcome?

First of all, we are glad to be able to participate in a tournament of this format, with strong teams coming to Banja Luka. We wanted to play our best game against Portuense, even try to win, but it is what it is, we lost in the end. Still, I believe we showed a good performance and fought till the last minute against them.

Hosting a tournament like this is a big deal for Banja Luka, what are your thoughts about this weekend in general and your expectations after this?

I believe we were able to show that we are great hosts before everything else, all teams were kindly welcomed and none had any complaints about anything. As you can see, the pool, the audience, the whole event – everything is on a high level.

We had a bad start into the game, we were nervous, unlike the other games we played. We were behind 2:0 so we started chasing every chance we had to turn the result around. Banja Luka’s team is physically very strong and well organized, which gave us quite some difficulties. Only in the last two quarters, we were able to gain victory, which is the first one for Fluvial in the Champions League.

After an exciting match, where Sintez Kazan from Russia managed to defeat CN Terrassa from Spain with 6:4, Kazan’s head coach Andrey Belofastov shared his views on the weekend

How did you experience the game, what are your thoughts?

This was a very important and difficult game for us, as we knew that the winner would advance to the second round of qualifications. We were ready for this hard game, still, there were many mistakes from the get-go. No goals in the first quarter, which is a rare sight in water polo. But well, the defense won the game today, we were slightly better in that regard, which saved us in the end with the result 6:4 – truly a difficult game.

Facing the Hungarians tomorrow, which are definitely the favorites of the tournament, but whatever, this is water polo, we will try out best.

What are your thoughts on the tournament being held in smaller water polo hubs like Banja Luka?

What are your thoughts on the tournament in general and your expectations against Kazan tomorrow?

We came to check out Kazan’s game as we did not have a chance to see them play against a stronger team. We will prepare well for them. We may have qualified already, but this is a great benchmark for us in regard to the upcoming games and tournaments.

The tournament execution is on a very high level, considering that the team from Banja Luka has not had any experiences with events like this before. I wish them all the best, these are young guys who of course need a lot of practice and experience over time, so best of luck to them.

The first qualification circle of this year’s LEN champions league marked not only the season kickoff but also the first step towards promoting water polo across communities which are new to the sport and the professional scene. We are looking forward to seeing new teams grab their chance to compete on the international stage next year, as well as witnessing the advances this year’s hosts can make until then.