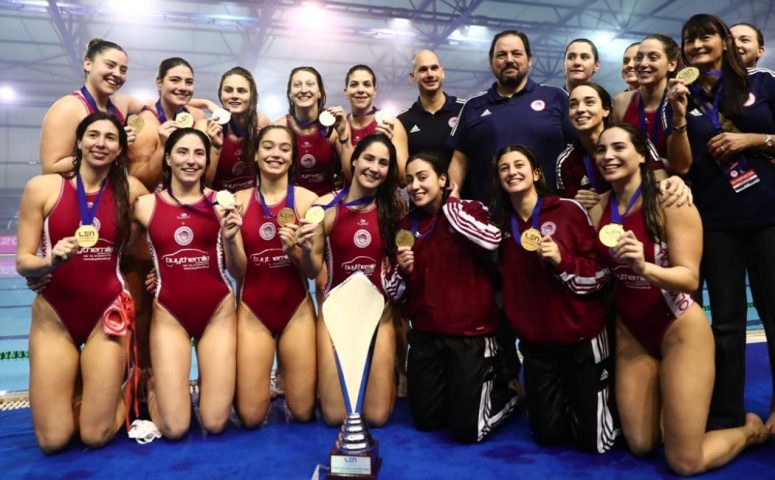 Olympiacos have won the LEN Super Cup with a strong display at home in front of a raucous Greek crowd, defeating KINEF Kirishi 14-11. Jordan Raney, the American, was the star  player in the game, scoring four and playing with real confidence, while all three of the Plevritou sisters scored: Vasiliki (2) Eleftheria (1) and Margarita (1).

For KINEF, they competed well, and perhaps may have got a result had they taken advantage of their strengths in the second period, but ultimately were too open in that second period. Despite the defeat, Tatiana Zubkova was outstanding in the match and really tried to pull her side into the match.

Both of these teams are in the quarter finals of the Euro League and both win face Hungarian opposition. Olympiacos will face Dunaujvaros, while KINEF await UVSE.

Tatiana Zubkova opened the scoring with a expected finish on the counter-attack. Russian number 2 found herself in acres of space and put the ball past Diamantopoulou. But Eleni Xenaki equalised moments later with a smooth backshot from the pit.

But Kinef really looked in the mood  and scored two goals on the trot. Kseniia Krimer firstly converted coolly, before Daria Ryzhkova dispatched from range.

Margarita Plevritou then pulled it back to 3-2 with an instant response and her teamate Nikoleta Eleftheriadou also was on the scoresheet not long after, but KINEF were just ahead after the first period thanks to a Ekaterina Prokofyeva shot that caught out Diamantopoulou at the near-post.

With the first period being close, the second period started much the same. Eleftheria Plevritou made it 4-4 with a minute into the quarter, but the Russian visitors built a two goal lead – with finishes from Nadezhda Glyzina and Tatiana Zubkova’s second of the game.

But then, the tables turned completely as Jordan Raney, the American who missed out at the Olympic games in Tokyo, pulled her side back into the game, firstly with a left-sided shot on a man-up, before scoring seconds later in transition to finish off a swift Olympiacos counter-attack to make it 6-6.

It was then Vasiliki Plevritou turn to help herself to a double score. Her first when she kicked up high and bounced the ball low past Anna Karnaukh, before making it 8-6 with a curling effort that wrong-footed Karnaukh to send the home fans wild. The fans then went even wilder, eight seconds from the end of the half when the Canadian left-hander, Kyra Christmas scored a 1 on 1 on the right hand side.

Having led, the Russians now trailed by 9 goals to 6, but their response was positive. Ksenia Krimer grabbed a goal 30 seconds into the third period with her shot just scrapping over the line having deflected off the back of the Olympiacos keeper. Tatiana Zubkova then got her hat-trick when her leaning shot clattered in off the post.

However, Olympiacos were keen to make full use of their home advantage, and three of their recent acquisitions who have certainly made Athens their home and put a bit of daylight between the two teams. Firstly Christmas, and then Raney and Xenaki converted to take the score to 12-8. Zubkova’s goal just before the end of the third may have given KINEF a bit of momentum, but the Russians lost one of their bigger players, Evgeniya Ivanova, who picked up her third personal foul.

It was Brigitte Sleeking, who had a fairly quiet game, who fired a near-post shot in, before Jordan Raney, thundered the Super Cup to the trophy cabinet of Olympiacos Piraeus. Tatiana Zubkova, who had a fantastic game, pulled one back with three minutes to go, but it was not enough for the visitors. Even a goal from Anna Karnaukh, the KINEF keeper on the left, was impressive, but not enough to build on a 14-11 score.