Croatia clinches the trophy as Fatović hits 6 against Spain

Home side Croatia remained on the winning track and added the historical first Europa Cup to their 2017 world title as they beat Spain 12-9 in brilliant final in Rijeka. LEN Award winner Marko Bijač posted 12 saves while Loren Fatović netted six goals, becoming the protagonists of the evening. The bronze went to Italy after a thrilling 10-9 win over Olympic champion Serbia.

In the final, Spain could withstand the pressure until late in the third period as they managed to come back from 1-3 to 5-5 and trailed by one with 2:20 remaining in the third at 6-7. Then they missed a man-up in a crucial moment and soon they found themselves 6-9 down before the last break. The Croats marched on and led 7-11 with 5:23 remaining, and even though their rivals pulled two back but Loren Fatović, playing the match of his life (so far), scored his 6th goal and that sealed the home side’s triumph as well as secured the top prize of €20,000. Spain returned to the podium after six years: their last medal dates back to 2012 when they also came second, that time in the World League, and just like here they lost to Croatia in the final.

The bronze medal game brought real thrills. Italy could do what few teams were capable of in the past: came back from 1-5 down to beat Serbia. The Olympic champion side looked to sail comfortably but lost their momentum soon and even if they were 4-6 up at halftime, the Italians produced another surge in the third and with a 4-0 rush they led 8-6. The Serbs managed to climb back to 8-8 before the last period but as tensions ran high the Italians controlled the proceedings much better, killed 6 of 7 Serbian man-ups alone in the last eight minutes. It was just as a feat as coming back from 1-5 – the Settebello deservedly brought home the bronze medal.

In the games for the lower ranks Montenegro demolished the Hungarians for the 5th place and Greece downed the French to win its first match in Rijeka and clinched the 7th position.

LEN’s brand new competition for national teams turned out to be an instant success and another great celebration of water polo as the final two days saw a turnout of 4,000 people as well as a series of outstanding games. LEN invested heavily, offering €80,000 in prize money (men and women competitions combined) and further financial assistance to the teams which showed their very best in return, rightfully validating the existence of the LEN Europa Cup which will see a grand expansion in the next season. 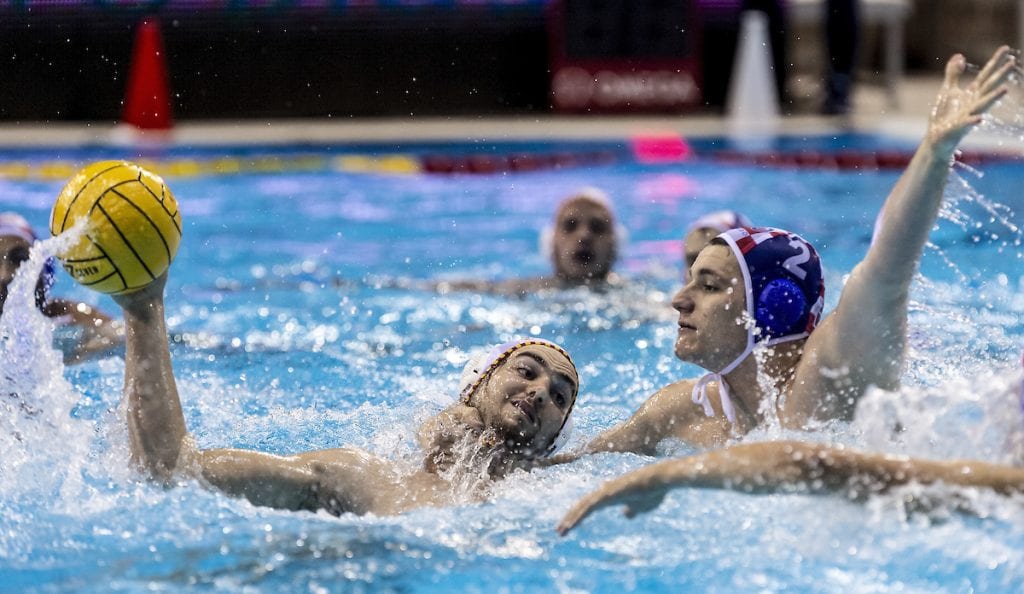 Two and a half minutes passed when Andro Bušlje opened the scoring: the Croatian captain returned with a great lob form his suspension. Loren Fatović doubled the home side’s lead from a man-up but that was followed by two missed 6 on 5s and this hit back soon: instead of 0-3 the first period ended with 1-2 as Sergi Cabanas made Spain’s first real chance, a man-up with 12 seconds from time.

Fatović went on scoring from the side but the Spaniards also found the way of scoring from the wing position, Alberto Munarriz and Albert Espanol both netted a bouncing shot from the respective 6 on 5s, between the two the Croats missed a rare 5 on 4. Fatović came again, from the same place though at equal strength this time, opening a flood of action goals in the next minutes. Marc Larumbe posted a great lob, the former Spanish international, Xavi Garcia, playing for Croatia now blasted one but Blai Mallarach immediately replied with 32 seconds to go for 5-5. However, the hosts had the last laugh as Fatović netted his 4th from a man-up, with just one second before the middle break (5-6).

The Fatović-show continued in the third, after a missed Spanish man-up, the son of the former Croatian world champion player Elvis, buried another 6 on 5 for 5-7. Bijač posted three saves, but the other hero, Fatović hit the post from the next extra. And Munarriz could score from the Spanish extra, though Ante Vukičević reset the two-goal cushion immediately. Then came some crucial
moments when the Spaniards could only hit cross bar from a man-up while the Croats made their 6 on 5, this time Maro Joković found the back of the net with six seconds before the last break for 6-9 and this seemed to be decisive.

Of course, the Spaniards fought on and Munarriz brought them a bit closer from a counter but an immediate reply came from an easy 6 on 5 which Josip Vrlić put away. Spain missed a man-up and Vukičević put the writing on the wall for Spain as he scored a great action goal for 7-11 with 5:23 to go. Bićan, the LEN Award winner goalie made a couple of outstanding saves before Mallarach pulled one back from a man-up but the Spaniards couldn’t even shoot from the next one and even if they killed the Croats’ man-up and Alvaro Granados netted theirs only 1:58 minutes remained and they were still two goals down. And soon it was three again, who else than Loren Fatović netted a fantastic distance-shot which obviously decided the outcome with 1:34 before the end. Two more great saves from Bijač – he ended the match with 12, while Eduardo Bejar made 5 – marked a worthy ending of the match and the Croats could celebrate winning the Europa Cup, a nice addendum to their 2017 world title. 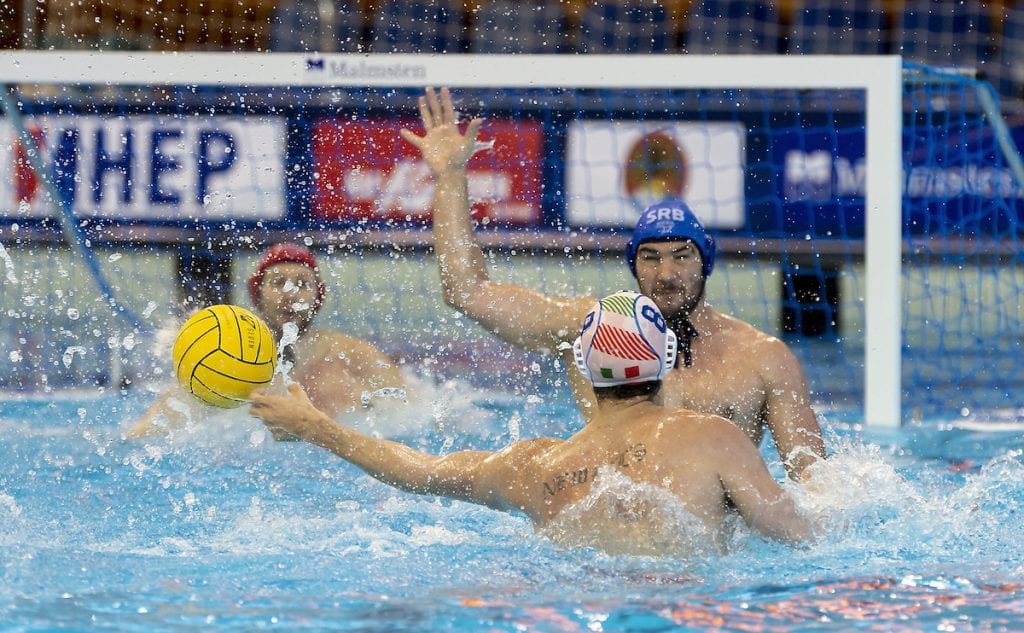 Italy missed four man-ups in the first period and it cost them dearly: Serbia took a 1-3 lead in eight minutes and added two goals early in the second to go 1-5 up. Dušan Mandić was on fire, he netted a 6 on 5, a penalty and a counter in little more than ten minutes.

After a huge blast from Francesco di Fulvio, the Italians gave signs of life and despite missing a couple of fine chances they could pull two more back later for 4-5. The Serbs seemed to have been lost a bit in the big rush, but a great combination created enough space for Miloš Ćuk to halt the Italian march (4- 6).

However, the Italians began the third with a brilliant run, a fine goal from the center by Guillermo Molina, followed by a nice action shot from Nicholas Prescutti brought them to level in a span of 71 seconds. Luck also took their side as a wicked deflection helped them to take the lead from a 6 on 5. They were in a 6-1 rush after 1-5, while the Serbs crashed in offence, missed three man-ups in a row. On the contrary, Italy rolled on, this time a rebound pushed them further on for 8-6 – the Serbs could score once in 12:42 minutes but then a fine man-up play led them back to the normal track and soon they got back to even, after a 10m rocket from Filip Filipović. Italy hit the crossbar twice from the following 6 on 5 so the last period started from 8-8.

The Serbs couldn’t bring on the psychological advantage, opened the last chapter with two missed man-up, between those Bodegas netted a spectacular goal from the center to give back the lead to Italy. The third man-up also gone for the Serbs as Marco del Luongo managed to catch the ball coming from just centimeters. And they couldn’t stop this negative trend as they missed the fourth too – unlike the Italians, as Pietro Figlioli sent the ball home from their 6 on 5 with 3:02 to go for 10-8.

The fifth gave them some hope, Strahinja Rašović finally broke the bad run while 2:26 were remaining on the clock. But it turned out to be an exception, soon the Serbs earned back-to-back man-ups but were unable to put either one away. In the last period they were 1 for 7 in the 6 on 5s, though it’s also a praise for Italy as they defended like superhumans towards the end of the match and that earned them the bronze medal and the cash award of €5,000. 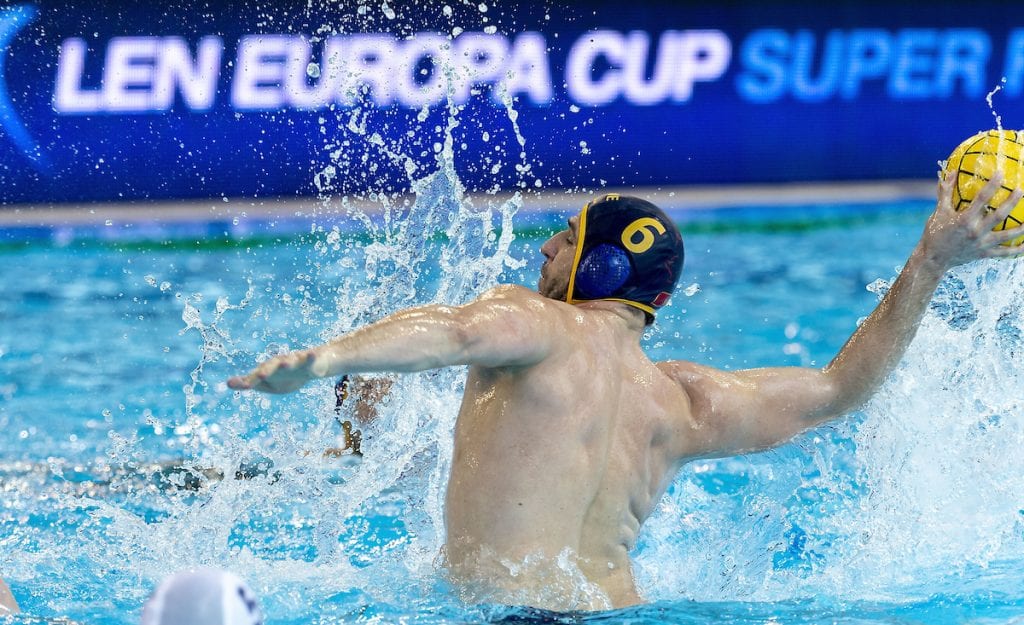 After missed man-ups at both ends, Montenegro opened the scoring with a double in 50 seconds and they managed to maintain this lead towards the end of the first. In the second they were still 3-5 up when Hungary had a couple of fine chances to come closer but they missed all, partly thanks to Miloš Šćepanović who came up with a series of fine saves.

These missed chances hit back when Bogdan Đurđić netted an extra for Montenegro for a 3-6 lead at halftime, but especially in the third when they scored three easy goals on their first three possessions. Hungary’s incoming substitute goalie Soma Vogel couldn’t stop any shot being on target as Montenegro widened the gap to seven goals. Đurđić was in great form, he hit five already in the third – these eight minutes saw as many goals from the Montenegrins as the first half as they downed their rivals 1-6 in the third.

Đurđić and his team rallied on in the last quarter, even though Viktor Nagy came back to the Hungarian goal, not even he could prevent his team from sinking further down. Their defense collapsed as they were facing a disastrous defeat which were close to double digits – something never seen in the previous three decades. At the end they escaped that, still, losing by 8 goals and conceding 15 (including 12 on equal strength) did not happened to the Magyars since the 80s. In fact they got 15 at the 2012 Olympics from Romania but scored 17, this time it was a different story. At the same time the Montenegrins – also lacking a couple of key-players – played a kind of happy water polo and finished the tournament on a high. 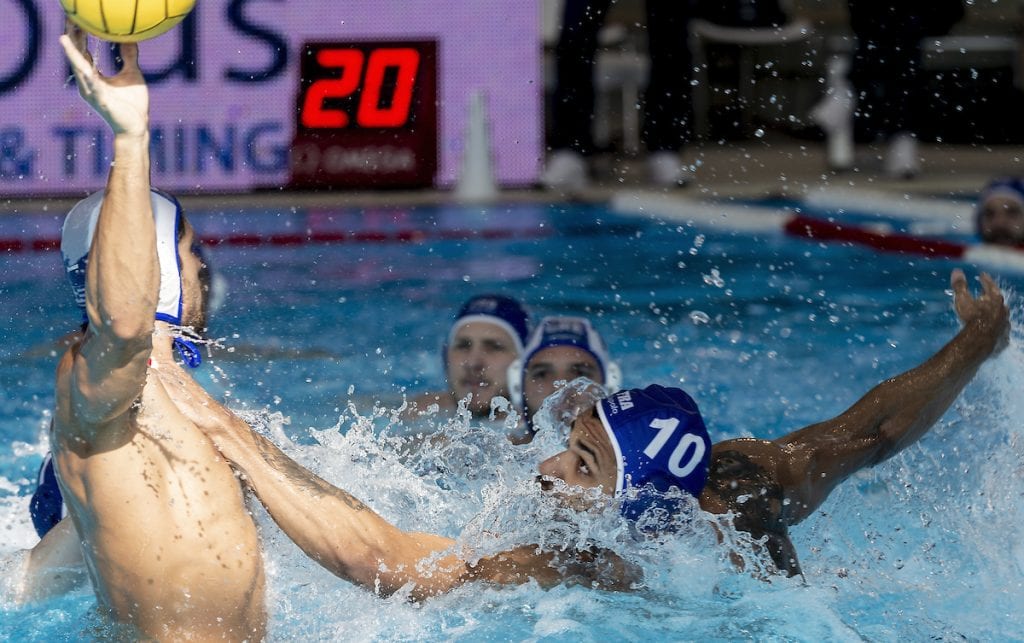 It was a quiet game and Greece earned its first win here as it was expected. After the prelims which ended in disappointment for last year’s World Championships semi-finalists with a draw and back-to-back losses, the Greeks downed France without problems. The French held on for a while, managed to score some fine early goals but soon the favorite side switched gears and the Frenchmen couldn’t catch them up.

Playing four matches in four days is quite demanding even for the well-trained professionals, like the Greeks but it took its toll heavily on the lower-ranked ones like the French players. The gap started opening up in the second half after 6-3, while the Greeks could add the same number of goals even playing on a modest pace, the French could net a single goal in the entire second half, despite playing in man-ups for six times.