Marseille defeated Jug Dubrovnik 15:13 in the match that was the highlight of the fourth day of the second Champions League “bubble” tournament in Ostia.

Marseille’s win over Jug in Group A isn’t a big surprise. The French club doesn’t have a rich tradition, but it has a very good team, which has played well since the start of the season, although it has collected only seven points so far.

Spandau and Olympiacos shared the points after a thrilling battle, with a lot of twists and turns. Olympiacos was the favorite here, but Spandau has improved its play significantly in the last few months. The Germans are still in the race for the Final Eight.

The second “bubble” tournament of Group A was completed by an Italian derby. Pro Recco defeated Ortigia 10:3 and secured at least 2nd place in the group.

Favorites recorded easy wins in Group B in Budapest.

Marseille, led by France’s captain Ugo Crousillat and the players who learned to play water polo in the countries of former Yugoslavia, achieved an extremely valuable win and made another huge step towards the Final Eight.
The French team earned a 2-goal lead in the first quarter (2:0, 3:1, 5:3). Jug managed to equalize just once (3:3). But, shortly after Jug’s third goal, Ugo Crousillat gave Marseille a 4:3 lead. From that point on, Marseille was always in front, although Jug was climbing from time to time.

Marseille opened the second period excellently, with a 4:1 rush. In the 13th minute, Andrija Prlainovic scored from a distance for a huge 9:4 advantage. Jug’s defense was far from good in the first half. This team hasn’t conceded 9 goals in the first half recently(two days ago, Pro Recco had an 8:1 lead against Jug at halftime).

After Marseille’s eighth goal, Toni Popadic was replaced by Antonio Vukojevic in front of Jug’s goal. After that change, Jug tightened its defense. The Croats kept Marseille goalless for nine minutes. On the other side of the pool, Jug found the net four times and cut the deficit by the middle of the third quarter (8:9).

Ante Vukicevic ended Marseille’s scoreless phase in the 5th minute of the third period for 10:8. But, Jug kept up with the French, who had a slim 11:10 lead before the final quarter. 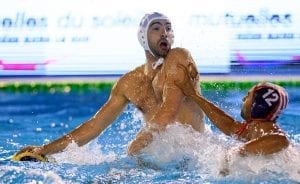 Marseille produced a 3:0 series in the first five minutes of the final quarter – Ante Vukicevic scored two, Romain Marion-Vernoux added one goal for 14:10. But, Jug didn’t surrender and stayed in the match. The Dubrovnik-based side replied with three goals. USA’s Alex Obert converted a man-up 83 seconds from the end, and the difference was just a goal (13:14). The Croatian champion was very close to a point, but they couldn’t equalize. Marseille’s captain Igor Kovacevic decided everything 19 seconds before the end with a goal for 15:13.

Both teams had ups and downs, which is normal at the end of the four-day tournament. In the end, Olympiacos can be happier than Spandau because the Germans were closer to a victory.

The Greeks had an opening 2:0 lead, but after that, Spandau water polo players, led by Nikola Dedovic and goalkeeper Laszlo Baksa showed something of their best. Spandau leveled the score – 2:2. Still, Genidounias hit the back of the net in the last second of the first period for 3:2.

Spandau’s defense was superb in the following minutes, and they made a big turn. Spandau scored four consecutive goals and earned a 6:3 lead in the 18th minute. The Germans even had a man-up to go up 7:3, but they missed the chance.

After that, the Greeks started coming back. They scored four goals within four minutes. Stylianos Argyropoulos found the net from a counter-attack 52 seconds before the last break, and Olympiacos regained the lead (7:6). Still, Nikola Dedovic converted a man-up to 7:7 in Spandau’s last possession in this period. 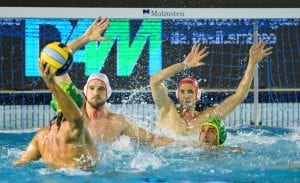 The first goal in the fourth period was scored 04:19 minutes before the end. Lucas Gielen put Spandau in front with an action goal – 8:7. After that, both sides missed a few chances, while American Hannes Daube saved a point for Olympiacos with 14 seconds to go – 8:8.

Pro Recco continued its winning streak and finished the second tournament with a 100% record. The group leader showed no mercy to Ortigia in the Italian derby.

At the first “bubble” tournament, Pro Recco defeated Ortigia by three goals – 10:7 (midway through the third period of that game, the score was 7:7). This evening, there was no excitement. Pro Recco’s defense worked perfectly (first goalkeeper Marko Bijac was on the bench, but Tomasso Negri replaced him very well)

The Genoese played patiently in the attack and built a 5:0 advantage before the middle break.

In the 20th minute, Gonzalo Echenique stretched the margin to seven – 7:0 from a counter-attack. 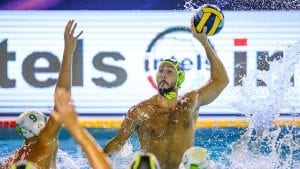 Two minutes and 50 seconds before the last break, Ortigia finally found the net. After a turnover foul by Recco’s team, Christian Napolitano scored for 1:7. They scored two goals in the last 71 minutes of this quarter. Stefano Tempesti, who didn’t post a single save in the first half, also played better after the three-minute break, but the Sicilians started waking too late. Pro Recco water polo players secured the win after a 7:0 lead.

After a new loss, Ortigia has slim chances of reaching the Final Eight, but the Sicilians aren’t out of the race. 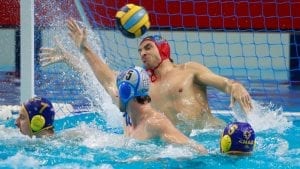 Dinamo improved its offensive play comparing to the matches against Hannover and Ferencvaros, but Brescia proved who the favorite was. The Italians dictated the pace, they led throughout the match. Dinamo managed to reduce the gap two times (1:3, and 3:5), but Brescia cruised to a win while saving energy for tomorrow’s derby against Ferencvaros.

Barceloneta water polo players earned a safe advantage in time, and controlled the match to win the points they counted on. Hannover fought hard, but it couldn’t cover the deficit incurred in the opening minutes. 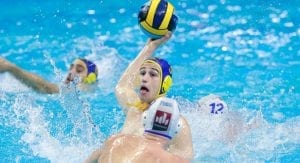 Barceloneta grabbed a 3:0 lead before Hannover scored its first goal. The Germans came close early in the fourth (2:4), but the Spaniards responded with two goals in 69 seconds for 6:2. Hannover managed to half the distance (4:6), and to reduce the gap to two several during the third period (6:8, 7:9), but Barceloneta’s victory wasn’t in real danger. The 2014 European champion dominated the fourth quarter. Barceloneta gained a 12:7 advantage, and after that, Hannover scored only a consolation goal.

The Hungarians opened the match with a 3:0 blast, and maintained a 3-goal advantage until the end of the first period (4:1). The Montenegrins tightened their defense after the first break and managed to reduce the gap to one (3:4) in the middle of this period. Still, Vendel Vigvari, the youngest in the team of Ferencvaros, scored two goals in the last 102 seconds of the first half and Ferencvaros went up 6:3. The second of these two goals came just a second before the buzzer and was confirmed after a VAR review. 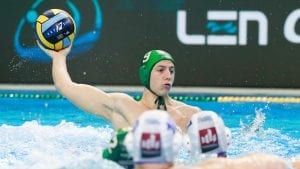 Vigvari sank all Jadran’s hopes in the first minute of the third period. He scored from 6 on 5 for 7:3. By the middle of the quarter, Ferencvaros built a 5-goal margin (Jaksic for 8:3). Ferencvaros played calmly until the end and took the three points with no problems.

(The second “bubble” in Group A has been finished today)