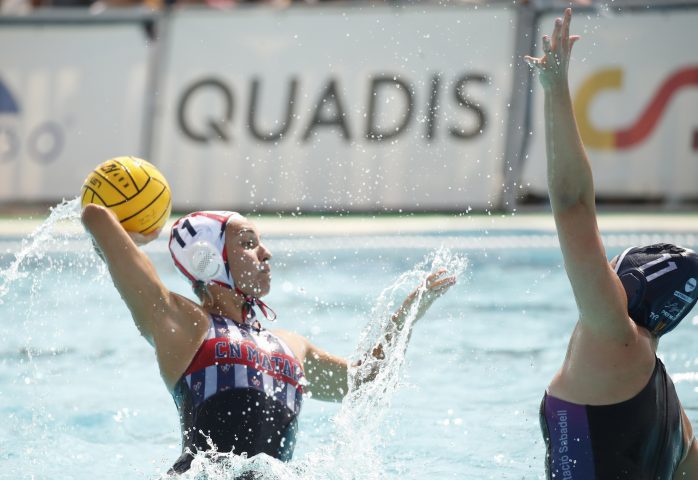 The Women’s Division de Honor title in Spain will be settled tomorrow as Mataro levelled up the Play-Off series with a penalty shoot-out victory over Sabadell.

Another hugely entertaining game in the Division de Honor was played out between Mataro and Sabadell in front of a hugely vocal crowd in Mataro – a contest that could only be settled by penalties after an 8-8 draw in regulation time.

Irene Gonzalez stepped up in the match today, netting four over 32 minutes and another in the shootout. Vivian Sevenich and Anna Timofeeva both played their parts in the centre for Dani Ballart’s side, who force a third and final match tomorrow.

While Sabadell were once again without Maartje Keuning, they were given a boost in the shape of Maica Garcia Godoy – even if she did miss the all important penalty to decide the result, before Clara Cambray’s shot down to Laura Esters right confirmed a rematch tomorrow.

The first period was close; the first of Irene Gonzalez’s five goals cancelled out an early score from Annie Espar. Sabrina Van der Sloot made sure that she put away a 5m penalty given away by Bella Markoch, before her international teammate, Vivian Sevenich, converted well from the pit.

While the first 8 minutes were close, the second period was anything but as Sabadell scored three unanswered goals to put Saba 5-2 up. Mati Ortiz scored with the quarters first attack, before Irene Gonzalez scored two more for her hat-trick.

You did worry that at this point the game would become too stretched for Mataro, and without a big response, Sabadell would look for all the world that the Division de Honor title would be coming back to Can Llong.

However, spurred on by a magnificent crowd on the Maresme coast, Mataro would not lie down, desperate for the title not to slip away. Two scores from the ex-Sabadell player, Silvia Morell drew Mataro back within a score at 5-4, before Anna Timofeeva scored a classy backshot to level the game up at five apiece, and send the Mataro crowd into ecstasy.

But one of the biggest roars of the afternoon came just two seconds before the end of the quarter, when Van der Sloot was excluded, and Vivian Sevenich gave Mataro a 6-5 lead into the last with a well taken shot on the post.

While Mati Ortiz was quick to give David Palma’s side parity in the fourth, it then looked like Mataro may have sealed the game when Van de Kraats found her scoring rhythm, before Bella Markoch broke a 3 minute deadlock without a goal.

However, it was Sabadell’s time for a resurgence, and they got that firstly from Maggie Steffens, before Irene Gonzalez silenced the crowd with the penultimate attack of the game. With 40 seconds on the clock, Gonzalez was afforded much space on the top, and after faking half a dozen times, picked her spot to level the match at 8-8.

And so with penalties, Sabadell took first, and you would have bet anything that Maggie Steffens would put her shot away, but she couldn’t beat the keeper. Clara Cambray missed her shot for Mataro, but not before Annie Espar and Maica Garcia had already converted.

Irene Gonzalez carried her goal scoring form from the match into the shootout, as did Van de Kraats to make it 2-2 in the shootout.

Two uncharacteristic misses from Nona Perez and Bella Markoch added to the tension of the game, and while Judith Forca scored and Steffens netted when asked for the second time, it was Maica Garcia who made the error, giving Clara Cambray the chance to make up for her earlier miss – and she did, scoring the all important penalty to send the game to a third Final tomorrow.

After a hugely thrilling two games in the series, everything will be settled tomorrow. After many twists and turns in this great battle between the two great clubs, will it be Sabadell vying for a 19th league title, or can Mataro win what would be only their second title after their first in 2019-20.