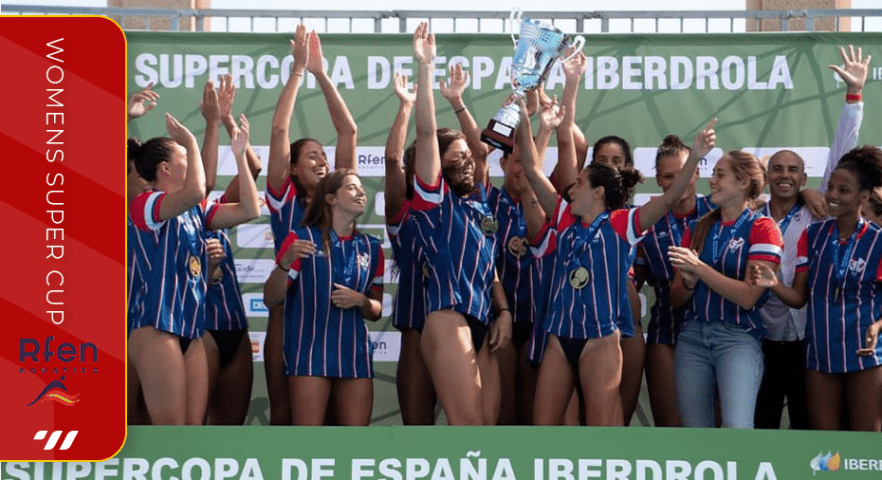 The latest instalment of the epic Sabadell vs Mataro rivalry today ended in a 10-9 victory for the latter, in a frantic Spanish Super Cup Final.

There were jubilant scenes from a packed crowd at the end of a thrilling match at the iconic Joan Serra pool in Mataro, as the home side got their revenge over the last season’s league champions, who beat them last week in the Copa Catalunya.

It’s high-stakes matches like the one we saw today that really give the sport a gripping edge, and the quality of the two teams today is a real credit for the Spanish League.

Rita Keszthelyi-Nagy was outstanding in her first game of note for her new club, netting a hat-trick. The wingers on each side for Mataro, Simone Van de Kraats (right) and Silvia Avegno (left) were outstanding at both ends of the pool – adding finishing product in attack, and helping out to drop on Sabadell’s two excellent centre-forwards, Maica Garcia and Paula Leiton. Elena Sanchez, a silver medalist from Tokyo, was game changing in goal for Mataro, making several key saves.

Sabadell were not at the level needed today, and that will worry them for future games against their biggest rivals. While there were sparks of brilliance from Bea Ortiz (3 goals), Judith Forca (2 goals) and Maica Garcia (2), David Palma’s team were outthought, and outfought today.

Before the game, former Mataro player Marta Bach was honoured after announcing her retirement last month. There was also a minute silence in in memory of the late legendary commentator and journalist Pepe Ruiz Orland, who passed away yesterday.

The domestic season begins this weekend in Spain; Mataro face Barceloneta, while Sabadell open their season against Boadilla. 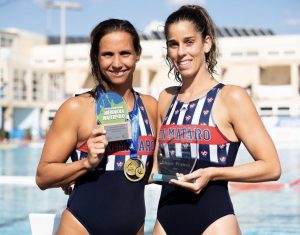 The majority of the first quarter was tense, but Mataro prevailed, taking a 2-0 lead and winning the period 4-2. Anni Espar was the first name on the scoresheet, followed by Queralt Bertran—who linked up well with Silvia Avegno throughout the game.

It didn’t take Rita Keszthelyi-Nagy long at all to make her mark on the game, scoring a brace inside the first eight minutes.

Before long, though, Sabadell were back level at 4-4 thanks to goals courtesy of two former players of CN Rubi. Elena Ruiz took the first, but Bea Ortiz made it count with a sublime cross-cage shot from the left side.

The game became suddenly very chaotic, with both teams seemingly able to score on every attack. Judith Forca moved into a more central position to make it 5-4, but Viviane Sevenich tucked home from close range off Silvia Avegno’s pass to level proceedings.

Then, Maica Garcia showed why she is thought to be the best center forward in the world by hitting a formidable back shot past Sanchez. However, Silvia Avegno’s floating shot curled beautifully past Laura Ester to tie the game at 6-6.

In the third, there were two penalties each; Simone Van de Kraats put her team in the lead via an excellent turn at centre by her compatriot Vivian Sevenich, but Bea Ortiz responded immediately with her third goal of the game via her 5m throw.

Some quick thinking from Bea Ortiz then allowed her to pick out Maica Garcia on the post on the power play, but Van de Kraats ensured the scores were level at the end of the quarter (8-8) when she scored from her favoured position on the right, low past Ester in the Sabadell goal.

There were two significant moments early in the fourth quarter that gave Mataro a real momentum boost. Firstly, they had the lead shortly into the fourth quarter via Van de Kraats’s second penalty of the game. But then, Elena Sanchez  in goal for Mataro made a truly amazing save to stop Paula Leiton from tying the game from close range.

Judith Forca eventually broke the Mataro resistance, but the game was there to be won for Dani Ballart’s team, and who else but Rita Keszthelyi, for her hat-trick goal, to win the match. Sabadell pushed for the all important equaliser, but Mataro kept their blocks high and ran down the clock.

Read more about the Women’s water polo in Spain