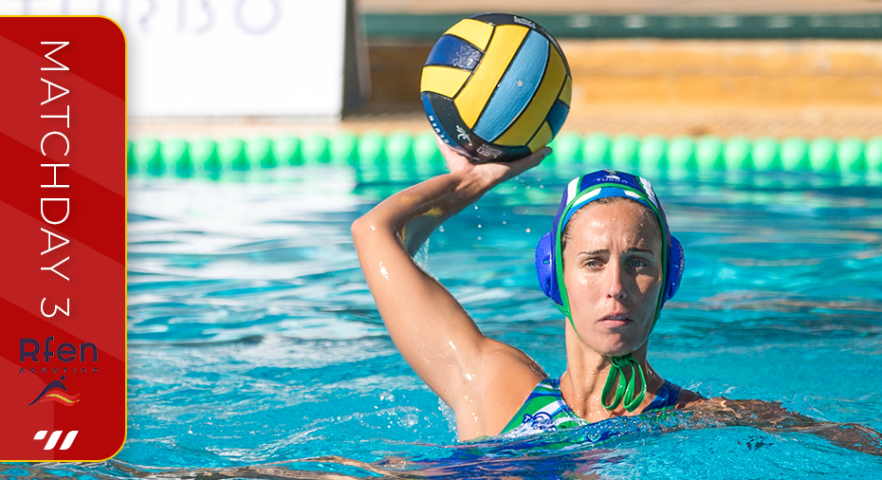 There were just two games in the Spanish women’s Division de Honour this weekend as the water polo community in the nation turns its attention to the World League Super Finals.

Alba Munoz scored five goals to lead Marian Diaz’s squad to a comfortable victory over ESC Zaragoza in the opening match of the day. For the time being, Medi are top of the league.

It took less than thirty seconds for Mediterani to open the scoring, with Alba Munoz peeling away from centre. Munoz added a second a minute later with a solid turn at centre. Natalia Manero pulled one back for Zaragoza with a delightful lob, but goals from Espar and Lizotte gave Medi a 4-1 lead after eight minutes.

A cool penalty dispatched by Lizotte to the left-side, and a swift counter-attack score by Daniela Moreno kept the hosts with a buffer at the half-time break.

However, four quick goals at the start of the third put the game to bed; two more from Munoz, and rifled shots on the right by Vilanova and Crevier. Another score from the right-wing by Axelle Crevier put the hosts up by ten scores going into the last (12-2).

Miriam Herrera netted a brace in the last quarter for Zaragoza via two excellent shots from the top (both from extra-player situations), but Sarah Lizotte and Clara Espar both secured their hat-tricks in the third to wrap the game up.

The first quarter was a tight affair, with Rubi responding well every time that Catalunya scored. Only Roline Schuijt’s goal with 51 seconds from the break gave Gabor Egedi’s team a narrow 3-2 lead.

However, two of the scorers from the first period netted inside the opening two minutes in the second quarter (Leonard and Schuijt) to give Catalunya a two-goal cushion. Raquel Prieto pulled one back a minute later.

While a composed 5m finish by Clara Diaz took Catalunya to 7-4, Rubi stayed resolute, and pulled within a single score going into the last, courtesy of crucial conversions from Elena Vesperinas and Raquel Prieto (7-6).

But Catalunya swept Rubi away, with five unanswered scores in two minutes (Van Rijn 2, Diaz 2, and Bellido) which gave Catalunya its first points of the season