The first day of the men’s Olympic tournament at the Tatsumi Water Polo Centre in Tokyo offered a lot of excitement.

Greece produced a surprise by beating European champion Hungary (10:9). Greece isn’t an underdog, but Hungary is one of the favorites for the title. Therefore many expected that European champions would win on Day 1. The Hungarians had a 3-goal lead in the early stage of the match (5:2), but, in the middle of the match, Greece produced a 6:1 series to earn an 8:6 advantage, and that was crucial for the outcome.

Spain edged out Serbia (13:12) in the big match of the day. Montenegro started slowly but defeated Australia. USA was better than Japan (15:13).

Hungary started quite well. After a 3:2 first quarter. In the opening minutes of the second period, the European champions stretched the margin to three (5:2). Midway through this period, Greece reduced the gap (4:5). Denes Varga, a 4-time Olympian, converted a man-up in the 14th minute to give the Hungarians a 6:4 lead. But, after that, the Greeks held the favorites scoreless for almost eight minutes. By the end of the first half, Greece equalized (Papanastasiou and Kapotsis).

The Greeks,who had an excellent percentage of a man-up conversion, opened the third quarter with two goals and went 8:6 up (21st minute). Denes Varga broke Hunagry’s goalless phase for 7:8 (29th minute) and added one more goal to level the score at 8:8 just 53 seconds before the end of the third period. Still, Genidounias responded with a power-play goal just 14 seconds before the last break, and Greece entered the fourth period leading 9:8. 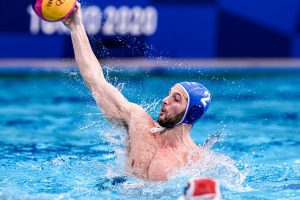 Balazs Erdely equalized – 9:9 (27th minute). In the middle of this period, Angelos Vlachopoulos found the net from 6 n 5 for 9:8, and that was the final score. Hungary had a few excellent chances to earn a point in the last few minutes, but Greece’s goalie Emmanouil Zerdevas was outstanding. He posted a total of 19 saves during the match and was one of the heroes of Greece’s victory.

World champion Italy had an easy task at the start of the tournament. The Italians showed no mercy to an underdog. Italy’s coach Alessandro Campagna decided to start the match with 10 field players and two goalkeepers. Marco Del Lungo was in front of the goal in the first two periods, and Gianmarco Nicosia replaced him after the middle break. Each of the 10 field players got on the scoresheet.

The encounter between the United States and Japan was an even contest. The hosts were in front for most of the time, but the Americans managed to secure the win in the last quarter and a half.

USA’s Alex Bowen opened the match with a goal from a penalty, but Japan quickly responded and went in front (2:1). The sides were tied at 3:3 at the end of the first period. Early in the second quarter, Japan built a 2-goal lead for the first time (5:3). In the middle of the quarter, Seiya Adachi sent the ball into the net from the 5m line and Japan earned a 7:4 advantage. Still, the Americans cut the deficit before the 3-minute break. Alex Bowen scored from a counterattack in the last second of the 2nd period (7:8). 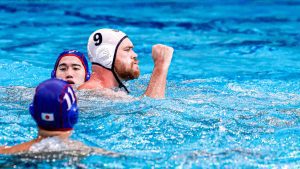 Japan dictated the pace in the opening minutes of the third period and regained a 2-goal lead (10:8). The Americans equalized in the 21st minute (10:10). Alex Bowen, the man of the match, closed the third period, with a power-play goal just 15 seconds before the last break, and put Team USA in front (11:10). The USA earned a 3-goal lead two times in the fourth period (13:10 and 14:11). Still, Japan never gives up, and managed to come very close. Adachi netted for 13:14 with 01:48 minutes to go. Luca Cupido converted a man-up 26 seconds before the final buzzer, and that was the end of the contest.

Spain continued the series of victories over Serbia at major competitions, which have lasted since the quarterfinals of the 2019 Europa Cup. After that, the Spaniards defeated the Olympic champions in three quarterfinal matches (2019 World Championships, 2020 European Championship, and 2020 World League qualifications). At the 2019 Worlds and 2020 Europeans, Spain won silver medals.

A young Spanish side and an experienced Serbian team fought a hard battle from the opening whistle. Spain took a 1-goal lead three times in the first quarter, but Serbia equalized on each occasion. The game followed the same pattern until 4:4. In the 12th minute, a debutant Djordje Lazic scored from an extra, and Serbia earned a lead for the first time (5:4). The title-holders had a 6:5 advantage (13th minute), but the Spaniards leveled at 6:6 soon, while they netted two action goals in the last 47 seconds (Sanahuja and Munarriz) and had an 8:6 lead at halftime. For the first time, the difference was bigger than a goal.

Serbia erased the deficit by the middle of the third period (8:8), but the Spaniards answered in the same manner, with two goals (Perrone and Granados) to jump to a 10:8 lead. Nikola Jaksic closed the third quarter (9:10), while Rasovic leveled at 10:10 early in the fourth period. Still, Spain didn’t let Serbia go in front. Alberto Munarriz was unstoppable. He gave Spain a 12:10 advantage. Jaksic halved the distance (11:12). Fernandez found the net for 13:11 with 107 seconds remaining on the clock. Filipovic made it 12:13 shortly after. Spain had an excellent chance to secure the win when they forced an exclusion 58 seconds from the end. Still, Serbia managed to defend its net with a man down, but the Serbs lost the ball in their last possession, and Spain opened the tournament with a win. 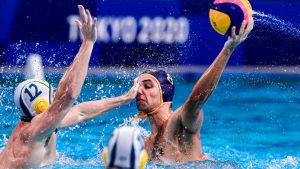 The “Aussie Sharks” proved that nobody could beat them easily, but they left the pool empty-handed today.

Australia opened the match with a 3:0 blast. Montenegro got on the scoreboard in the fourth minute when captain Brguljan converted a man-up. Still, Richie Campbell responded immediately with an action goal for 4:1. The Europeans, finally, caught up with the rival in the 8th minute. Still, Australia had a 5:4 advantage after the first quarter – Campbell found the net 12 seconds before the first break.

Australia maintained a one-goal lead until the end of the first half (7:6). The Montenegrins found their rhythm after the middle break, and dominated the third and the fourth period. The World League winners, led by Aleksa Ukropina, opened the third quarter with a 4:0 rush to earn a 10:7 lead. In the 24th minute, Tomasevic stopped Montenegro’s series of goals (8:10), but not for long.

Montenegro dictated the pace in the final eight minutes and recorded a comfortable 15:10 victory.

As expected, Croatia opened the 32nd Olympic Games with a big win. Croatia and Kazakhstan aren’t in the same weight category.

The Croats didn’t waste time and rushed to a 4:0 lead before the Kazakhs scored their first goal 23 seconds before the first break. At halftime, it stood 10:4. In the third period, the silver medalists from Rio outplayed Kazakhstan completely and from that point on, only the margin of their win was in question.

On Day 2, the Croats will have a more demanding task. They will face Australia. It will be “a family duel”. Loren Fatovic is one of Croatia’s best players, while his father Elvis guides Australia as a head coach.