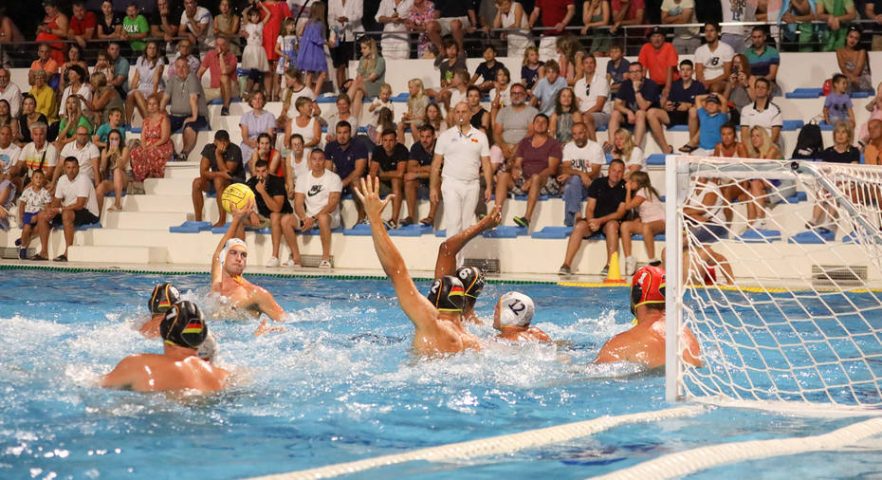 The reigning World League champion Montenegro beat Germany in Herceg Novi in its final rehearsal before the Super Final in Strasbourg.

Montenegro recorded an 8:3 (1:1, 2:1, 3:0, 2:1) victory in the encounter was a clash of two Jadran’s legends – Vladimir Gojkovic, Montenegro’s coach, and Petar Porobic. The latter was on Jadran’s bench in the early 2000s, when Jadran achieved great success (with Gojkovic in the team). Porobic has been Germany’s coach since last year.

The game was a part of the preparations for both teams (Germany will play at the European Championships), but also another celebration of water polo in Herceg Novi.

On this day, ten years ago, a renovated pool in Škver was officially opened. Montenegro and Spain faced off in a friendly game on July 19, 2012

Jadran and Herceg Novi are proud of the pool „Škver“, which has become a regular stop on tours of many water polo teams, not only for official games. Since 2012, 27 national teams have visited Herceg Novi to play or train in „Škver“. Among them have been all water polo powerhouses, but also the national team of countries that are far from the top, like Zimbabwe or Switzerland.

Besides 27 national teams, the players of 118 clubs from 31 countries from five continents have jumped into the pool in Škver in the last ten years.