Several derby games have been on the schedule of an action-packed Day 4 of the World U20 Championships in Prague.

Montenegro defeated reigning champion Greece with a last-gasp goal (9:8) to secure 1st place in Group D and a spot in the quarterfinals. An encounter between Italy and Russia offered a lot of excitement, too. The game ended with no winner – 9:9.

Besides Montenegro, Hungary also secured a spot in the quarterfinals day before the end of the group stage. The Hungarians were better than Germany (12:5) and cemented 1st place in Group C.

In Group B, Serbia beat the USA 14:9, and that result suits Spain because the Spaniards will probably finish atop this group.

Croatia and Russia will battle for 1st place in Group A tomorrow.

Note: During the first three competition days, live streams of all games of the Championships in Prague were available on Total Waterpolo’s YouTube channel. But, we had to stop streaming today. Unfortunately, FINA requested we take our live stream down, although the event organizer asked us to stream and provided us with the streaming key.

Italy and Russia had ups and downs in today’s derby. Russia started better. Italy managed to come back from four goals down and to take a lead. Still, Russia secured a point with a goal scored just five seconds from the end.

Russia led 2:1 after the first quarter. Early in the second, the Italians equalized (2:2), but Russia ruled the field in the following minutes. The Russians scored four unanswered goals and jumped to a 6:2 lead. 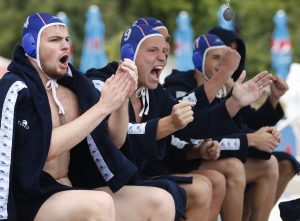 Italy captain Ferrero scored from a penalty to close the 2nd quarter (3:6), and his team started coming back. In the third quarter, Russia wasted some nice chances, including a penalty shot and a 6 on 4 power-play advantage. They paid for the missed chances. Italy netted four goals and earned a 7:6 advantage before the final period. 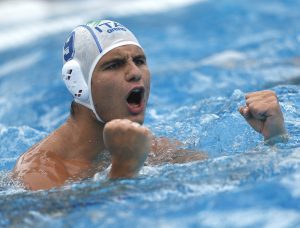 The fourth quarter was a culmination of a big thriller. Each of the five goals in the final eight minutes was scored with a power-play advantage, while both teams missed a penalty each.

After five straight goals by the Italians, Vasilev ended Russia’s goalless phase, which lasted for more than 10 minutes, as he converted a man-up in the 25th minute for 7:7. In the middle of this period, Condemi put Italy in front 8:7. Krasnov leveled at 8:8 with 130 seconds to go. Just 48 seconds from the end, Occhione converted another 6 on 5 to a 9:8 lead for Italy. But, that wasn’t the end. Russia earned a power-play advantage in the last 13 seconds. Vasilev hit the post ten seconds before the end. However, just five seconds later, Ivannikov found the net from the left wing and set the final score (9:9).

Russia kept a chance to win first place in the group, while Italy will finish 2nd or 3rd.

Croatia was very close to beat Uzbekistan without conceding a goal. The Croats led 31:0 in the 31st minute. But, Dashkov scored a consolation goal for Uzbekistan 80 seconds before the end. However, the winning margin in this match won’t be decisive in the battle for 1st place. Tomorrow, Croatia closes the group play with a game against Russia. If the Croats don’t lose tomorrow, they will remain atop the table and qualify for the quarterfinals. 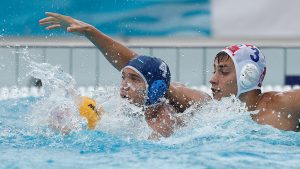 As expected, Spain defeated Slovakia in the first match of the day in Group B and then waited for the outcome of the encounter between Serbia and the USA. 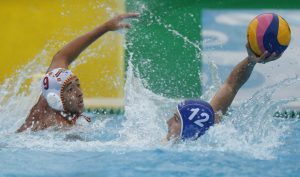 The Serbs had to beat the Americans by 11 goals to stay in a battle for 1st place. If Spain and Serbia, which shared the points on Sunday, are tied in points after the last round, then the results against the next highest placed team (probably the USA) will be considered to establish a classification. Yesterday, Spain beat the USA 20:10. Because of that, Serbia was seeking an 11-goal win today.

The Serbs took a flying start. By the middle of the second quarter, Serbia built a 7:1 and it seemed that an 11-goal win wouldn’t be an unattainable goal. 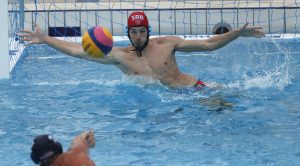 Serbia’s goalkeeper Vladimir Misovic was outstanding in the opening minutes

But, the Americans didn’t surrender easily. Team USA tightened its defense and started playing better in the attack. In the 19th minute, they cut the deficit to three goals (5:8). But, Serbia entered the final quarter with a 10:5 advantage and with slim hopes that it could achieve an 11-goal victory.

The USA opened the fourth period with two goals and trailed by three goals (7:10) four minutes before the end. It was clear that Serbia couldn’t record a big win, but the Europeans didn’t let the Americans go further. They kept a 3-goal distance for a while. Serbia secured a 5-goal win with two goals by Milojevic in the last 16 seconds. 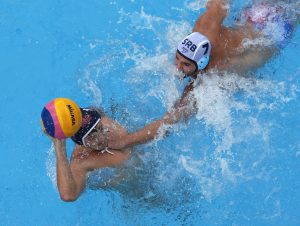 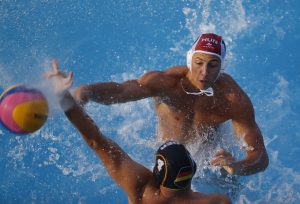 Hungary proved too strong for Germany, although the Germans kept up with the favorites for almost two quarters. In the 16th minute, Germany trailed only by a goal (3:4). Thirteen seconds before the end of the first half, Szeghalmi scored from the right for 5:3, and the Hungarians started breaking the Germans. Hungary scored five unanswered goals in the third quarter. Vendel Vigvari added one in the middle of the fourth period for 11:3. 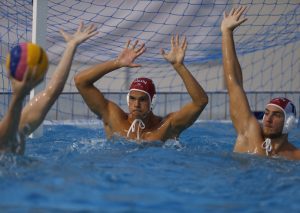 Brazil produced a magnificent comeback to beat Egypt and advanced to the knockout round, while Egypt will continue the tournament in the games for classification for places 13th-18th. The team from North Africa had a 3-goal led a few times, but it ran out of gas for the final quarter. Already in the middle of the second period, Egypt made a 3-goal difference (5:2). Brazil was coming back from time to time, but Egypt entered the fourth quarter with an 8:5 advantage. However, Brazil had the last laugh. The South Americans, led by Bruno Chiappini and Pablo Perreira netted four unanswered goals in the last eight minutes. Chiappini scored his fifth goal today in the 31st minute for the final score and Brazil’s win 9:8.

Greece and Montenegro were in a neck-and-neck race throughout today’s game. After a balanced first quarter, Greece opened the second quarter with two goals for 3:1. For the first and the last time in the match, the distance between the teams was two goals. But, not for long. Montenegro answered with two goals within 51 seconds and caught up with the rival – 3:3. Radovic gave Montenegro a 4:3 lead shortly after Greece’s Kalogeropoulos missed a penalty. Still, Korderas equalized 40 seconds before the middle break. 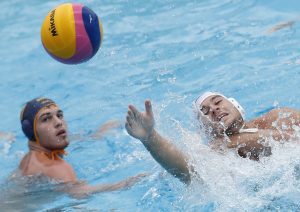 Midway through the third quarter, Greece went in front for the last time (Kalogeropoulos scored from a penalty for 6:5). Radovic scored from a power-play advantage to make it 6:6 just four seconds before the end of this period.

The Montenegrins dictated the pace in the fourth quarter. They took the lead twice (7:6 and 8:7), but the Greeks equalized both times. Less than a minute before the final buzzer, Marko Mrsic scored for 9:8, and Greece had no answer after that. 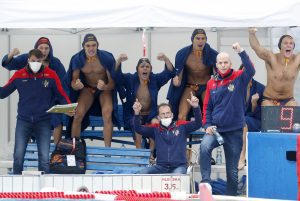 Tomorrow, Montenegro will play against Kazakhstan. Regardless of the outcome of that match, Montenegro will finish 1st in the group and qualify for the quarterfinals. At the moment, Greece is in 1st place, because it has a better goal difference than Montenegro. Still, at the end of the group stage, the first criteria if the teams are tied will be the score in their encounter.

South Africa earned the first three points. The win over Kazakhstan secured the knockout round for the South Africans. South Africa had a better start and led for more than two quarters. In the middle of the third period, Kazakhstan’s Gruzintsev leveled at 4:4. South Africa responded strongly – with three quick goals for a 7:4 lead. From that point on, the distance between the sides was never smaller than two goals. 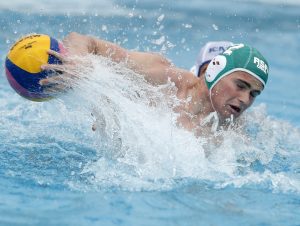 Schedule for September 1 (last day of the group stage)