Straight from the USA and the NCAA Finals, comes the report from our correspondent in the USA – Tonko Tony Karaman. See the detailed report of the finals!

Having lost in the NCAA finals the last four years and a year after losing the championship game in its home pool, USC men’s water polo handed Stanford the same fate, holding off a hard-charging Cardinal squad on The Farm for a 14-12 victory to secure its first national championship since 2013.

USC, winning its 10th national championship overall in men’s water polo, appeared to have the game in hand, scoring the first six goals of the game and holding a 12-4 lead in the fourth quarter before Stanford roared back on a 7-1 run to make it a 13-11 game with 58 seconds left. After calling a timeout, USC center defender Jake Ehrhardt iced the game with a goal with 31 seconds remaining to put it out of reach. Stanford center and MPSF Player of the Year Ben Hallock answered back with a lob shot with 18 seconds remaining but the Cardinal never got possession again.

“I’m very, very happy for [the seniors], first of all. Stanford is a very tough opponent with one of the best players in the nation and we were very worried about them. I think we did a great job defensively for most of the time. It was a complete team effort.”

The 2018 NCAA title was a sweet especially for senior Zach D’Sa, the only Trojan who has been on the NCAA Tournament roster each of the last four years and having to endure NCAA final losses in 2015, 2016 and 2017.

“It’s everything, honestly. It feels like the weight of the world is off my shoulders,” said D’Sa, a fourth-generation Trojan whose grandfather played water polo at USC. “It’s such a relief to finally win. The last three championships that we lost were really tough, but I think we learned from it and we came out here to play today and finally got it.”

“I love every part of this life of being a Trojan – waking up in the morning, going to practice with these guys. These are really not just like regular teammates, these are all my brothers that I will really be friends with for the rest of my life,” Mercep said. “It really means a lot that we got this for Zach and Danny [Leong], and it didn’t even cross my mind about the individual awards.”

“It’s nice to be recognized, but this is all about the team. That’s how it has been all throughout the season.” 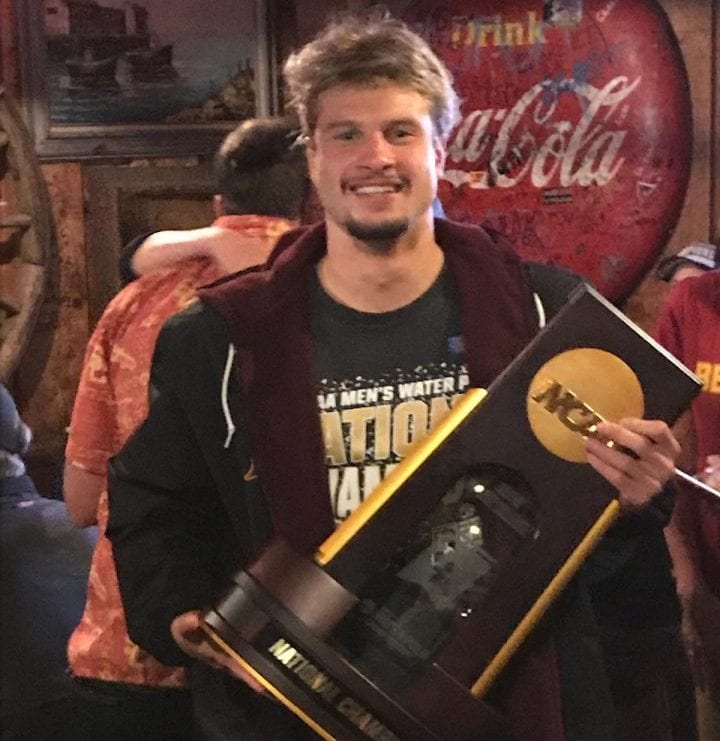 Jacob Mercep – the MVP of the match

Sam Slobodien, USC’s semifinal hero for scoring the game-winning goal against UCLA with five seconds left Saturday night, scored twice, while Nic Porter played a crucial role in shutting out the Cardinal for the first 10 minutes and 40 seconds and had 12 saves in the cage for the Trojans.

Hallock, a prime candidate for the Cutino Award, led the Cardinal with five goals, while Bennett Williams added a hat trick and Tyler Abramson scored twice for Stanford. Goalkeeper Oliver Lewis had four saves for the Cardinal.

The Trojans roared out of the gates, scoring three goals in the first three minutes and taking a 5-0 lead heading into the second quarter. Stanford had its chances, drawing five exclusion fouls but going 0-for-5 on the power play in the first period alone while the Trojans converted on both of its power-play opportunities. Nic Porter was huge in the cage for USC, making three saves in the opening eight minutes, including one at point-blank range to stymie a Stanford 6-on-5 attack. Both of USC’s first-quarter 6-on-5 goals came off the left hand of Mercep, scoring the first and last goals of the quarter.

Mercep picked up where he left off to start the second quarter, scoring 50 seconds into the second off an outlet pass from Porter on the counterattack to give the Trojans a 6-0 lead. The Cardinal finally broke through with a power-play strike from Dylan Woodhead with 5:20 to remaining in the first half before MPSF Newcomer of the Year Hannes Daube struck back at the 3:42 mark to give the Trojans a 7-1 lead heading into halftime.

The Trojans didn’t take long to start the scoring in the second half, as Marko Vavic deftly netted a sweep shot out of two meters. USC pushed the lead out to 11-3 off a Luke Wyatt 6-on-5 strike with 1:25 remaining in the third quarter before Bennett Williams scored on a Stanford counterattack to make it 11-4 heading into the fourth.

The Trojans looked to be cruise control after Matt Maier’s 6-on-5 tally put USC up 13-6 with 5:04 left, but Stanford ripped off four goals in a span of 2:11 to cut it to 13-10. Stanford really put pressure on the Trojans when Hallock drew a 5-meter penalty with 1:35 left, but the ball slipped out of Hallock’s hand as he went to take the penalty shot.

This was Stanford’s first trip back to the NCAA final since 2008. That year, the Cardinal also lost to the Trojans by two goals (7-5) in the championship game.