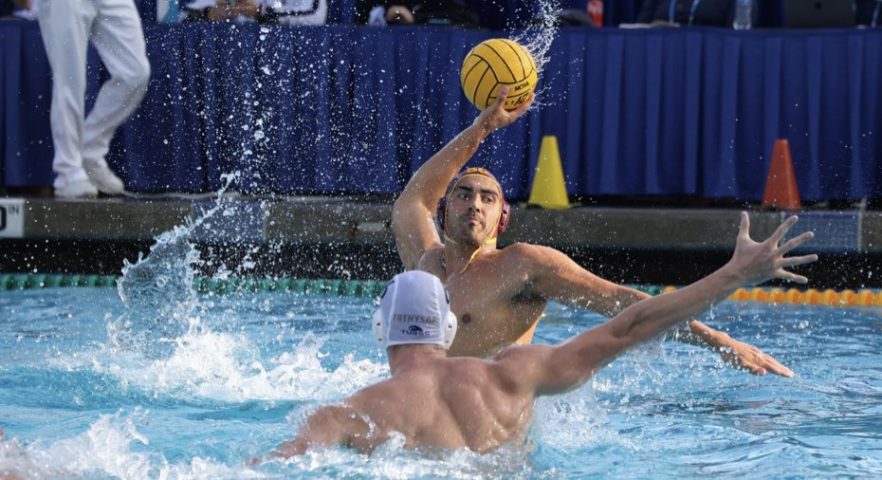 After two exciting semifinal matches, USC and CAL will face each other in the NCAA Championship Final.

USC Holds off UC Davis to advance to the Finals

In the first game of semi-final round of the NCAA Water Polo tournament, the UC Davis Aggies faced off against the USC Trojans.

The Aggies advanced after a close battle with the Long Beach State 49er’s. The top seeded USC Trojans received a bye to advance to the semi-finals.

USC started off with a bang as Ehrhardt skipped a beautiful shot into the back of the net to open the scoring for the Trojans on their first possession. Davis responded with a goal by Towill. USC came right back with a second goal by Ehrhardt on a strong power move from the center position. Baker then followed suit with the 3rd USC goal. Davis stayed close with a skip shot from Fleming. USC’s 4th goal came on a power play when Longston quickly converted from the top. USC’s last goal of the period was a 5 meter penalty conversion by Daube. The 1st period ended with a score of USC 5,  UC Davis 2.

After both teams traded shots to open the 2nd, Daube finally found the back of the net half way through the period to give USC a 4 goal lead. Defense was the name of the game as both teams played aggressively tight defense. Anderson converted on a power play to draw UC Davis to within 3. USC quickly answered back with a nifty backhand shot from Barker. Gross converted for UC Davis on the 6 on 5 to close the gap to 3 goals once again. The teams traded shots, but neither could find the back of the net. The half ended with the Trojans leading the Aggies 7-4. 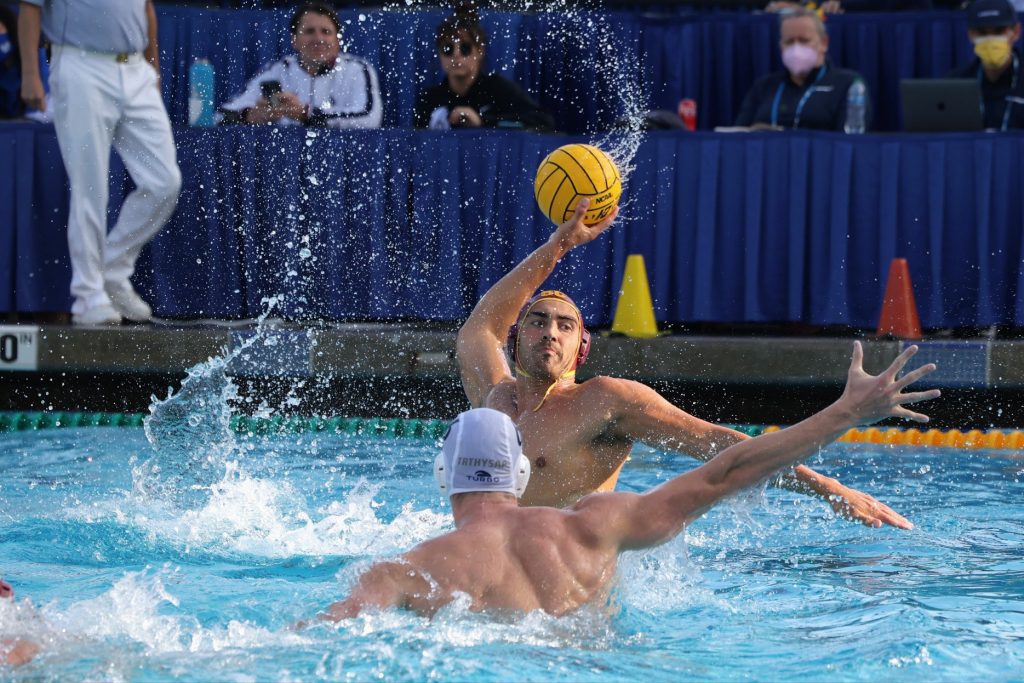 The 4th period started slow as both defenses continued to control the match.  Missed opportunities by both teams kept the score locked at 9-6, until UC Davis’s Murtaugh was able to convert to close the lead to 9-7. USC was able to draw a critical foul with 1:29 left to go on the power play. Mercep was able to convert and the USC Trojans took a 10-7 lead with 1:03 left. UC Davis quickly answered with a 6 on 5 goal by Plastino to draw within 2. USC converted on a final 5 meter penalty to extend the lead to 3. The match ended with USC holding off UC Davis 11-8.

Overtime in the second semifinal clash

In the second game of the day in the NCAA Water polo semi-finals, the UCLA bruins took on the Cal Bears. UCLA had advanced with a victory over the Princeton Tigers on Thursday, while the CAL  Bears received a bye to get to the semi-finals.

The contest started sluggish with both teams trading possessions until Cal’s Deely was able to convert to give Cal a 1-0 lead. UCLA came back strong with a 6 on 5 conversion goal by Saveljic to even the score at 1-1. UCLA converted on a second power play with a goal from Larsen to take a 2-1 lead. Cal’s Casabella fired back with a quick strike to even the score at 2-2. Casabella struck again to give Cal a 3-2 lead with 3:02 in the 1st period. Casabella again on the power play to go up 4-2. Both teams traded empty possessions to end the 1st period. Cal with a 4-2 lead at the end of 1.

The second period started with a 6 on 5 goal by UCLA that brought them back to a 1 goal deficit. Cal was able to extend the lead by 2 on a beautiful skip shot by Deely. UCLA converted on another 6 on 5 on their next possession to put the Bruins back to within 1 goal. After a couple of empty possessions by Cal, UCLA was able to even the score with an inside goal by Disipulo. Cal came up empty on their last possession. The fist Half ended in a 5-5 tie.

The second half started with UCLA drawing a 5 meter penalty that Saveljic converted to give UCLA their first lead 6-5. UCLA converted again on another goal by Discipulo to bring UCLA’s lead to 2. With just over. 2 minutes left in the 3rd period, CAL earned a 5 meter penalty that Casabella converted to close the lead to only 1. With time running out in the 3rd period, UCLA’s Dodd was able to extend the lead back to 2. Cal came right back with a quick strike to close the gap to 1 goal. UCLA pulled their goalie on the last possession of the first half to get an extra attacker on offense. The plan worked perfectly when UCLA’s Kenney converted to bring UCLA’s lead back up to 2. UCLA lead at the end of the 3rd quarter 9-7. 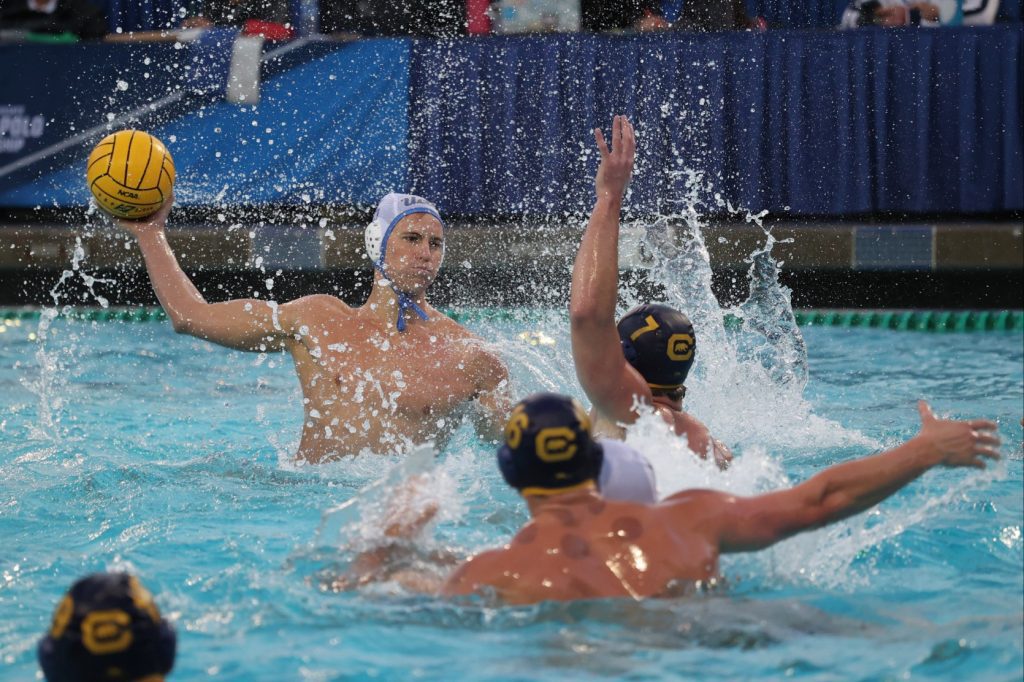 Casabella for CAL converted  on a nice skip shot to open the 4th period period and close the gap once again to one goal. UCLA was unable to convert on a 6 on 5 on their next possession, Cal came right back on their own 6 on 5 to tally a goal and even the score at 9. ( Deely with the goal) Cal was able to convert on their 3rd consecutive goal on a dandy lob shot by Casabella to regain the lead 10-9. The teams traded a few scoreless possessions late in the 4th period until UCLA’s Cavano was able to get the equalizer. Cal drew an exclusion on their next possession and was able to convert on a excellent skip shot by Valera, Cal back up by one. UCLA came right back on another 6 on 5 advantage and tied it up at 11 on a goal by Gruwell. In the last minute of the 4th period CAL was able to draw the exclusion and go on the power play. After a time- out by CAL, Deely was able to convert for CAL and regain the lead at 12-11.  UCLA pulled their goalie once again on their last possession to create the one man advantage and they converted again to tie the score with 3 seconds left.   The 4th quarter ended in a 12 to 12 draw.

Overtime saw both teams trade possessions with no change in the score until Cal was able to strike first on a 6 on 5 advantage with Popanikolaou’s first goal if the game to put the Bears up by 1. Neither team was able to convert on the following possessions, and the first overtime ended with Cal holding a slim 13-12 lead.