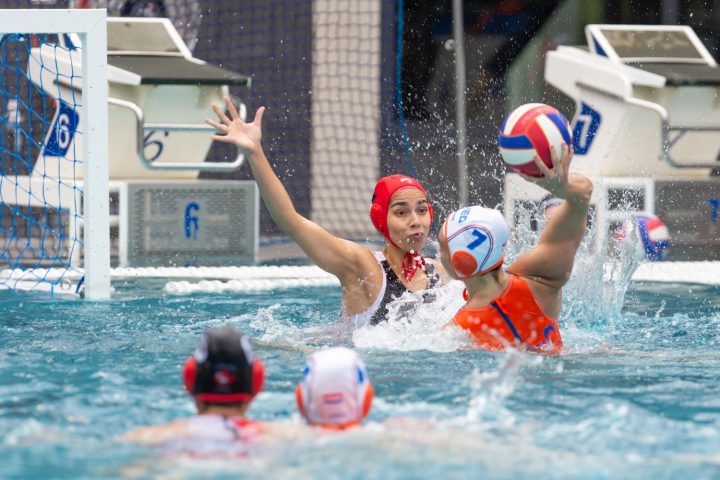 The Dutch women’s national team have beaten Canada 14-12 (4-6, 3-2, 5-3, 2-1) in a friendly game only a few hours after the national team coach, Evangelos Doudesis, named his squad for the World Championships in Budapest.

Played in front of a few hundred spectators just few kilometres from Utrecht, the Dutch were not convincing in the win, but both sides will be grateful for the run-out prior to the World Championships in Budapest that begin next week.

The fixture, which took place in Krommerijn, was played against the back-drop of the Dutch squad announcement earlier that day (See full squad below), which includes a mix of vastly experienced players, blended with some younger, more exciting talent.

The team features 7 of their squad from Tokyo 2020, including the competition’s top goal-scorer, Simone Van de Kraats, her teammate from Mataro, Vivian Sevenich, as well as Euro League winner with Olympiacos, Brigitte Sleeking, and Kitty Joustra – who finished her time with Cal Bears in America this Spring.

Sabrina Van der Sloot once again leads her national team to a major tournament, as the vastly experienced Laura Arts returns in goal for the Oranges.

Bente Rogge netted three times against Canada in the friendly, and is one of four players in the squad who play their water polo in the Netherlands. Alongside Rogge’s teammate from ZV De Zaan, Maxine Schaap, the young Lola Moolhuijzen (Ede Polar Bears) makes the squad, having only made her senior international debut against Greece earlier this year.

The Netherlands are in Group B, and will play their Group-stage games in Debrecen. They will face the Olympic Champions, the United States, as well as South Africa and Argentina.