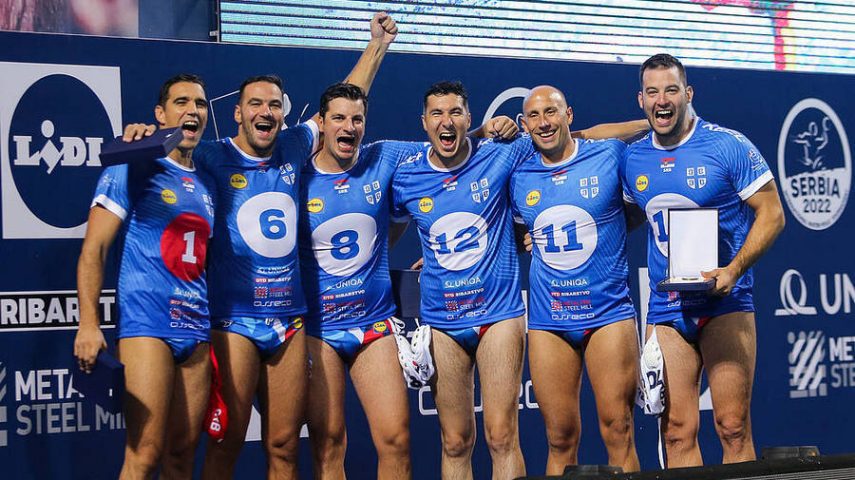 The preparation tournament “Serbia 2022”, with the participation of four excellent teams, started this evening in Belgrade. In the first round, Croatia beat France 15:11, while Serbia and Italy shared the points 9:9.

But the members of the four national teams didn’t play leading roles on the opening day of the tournament.

The second match of the tournament, Serbia – Italy, was a farewell game for the six aces who said goodbye to the national team last year after the Tokyo Olympics.

Before the match and during the pauses, emotions were evoked through video clips of some of the legendary games of the Serbian water polo team in the past decade,. celebrations after successes and other big moments in the careers of the six players.

The farewell show reached its culmination after the third quarter of the match Serbia – Italy.

After three quarters of the interesting encounter between Serbia and Italy the score was 8:8. Then, a long-awaited ceremony started. The six greats, accompanied by Sava Randjelovic, replaced their successors in the pool. They played for four minutes and proved they were still able for some excellent water polo moves. Filipovic scored for 9:8, while Damonte leveled at 9:9. 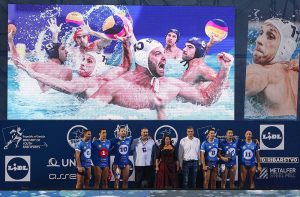 All photos by Slobodan Sandic/Water Polo Federation of Serbia

In the middle of the quarter, the referees whistled the end of the game. The six legendary players went out of the water one by one and walked around the pool. Numerous fans saluted them with big applause and loud cheering. At the end of the ceremony, the six received special awards from Viktor Jelenic, the Water Polo Federation of Serbia.

“This was one of the rare matches in which we didn’t follow game so much, but we watched the stands, our families, fans. This evening we experienced the moments we will remember all life. It was a pleasure to be a Serb, to have these fans and to say goodbye in this way. The most significant medal in my career on the national team isn’t any of the gold, silver or bronze medals. That medal has no color. My dearest medal are all these years I spent with my teammates we were like family.

All athletes have staige fright before big matches. We all had stage-fright of some other kind. The score, of course, wasn’t important, but we were very excited before, during and after the game. This was a very emotional night. This group of players deserved the farewell game, thanks to fans who were always with us. I am sure that they will support some new guys, new generations of Serbian water polo. 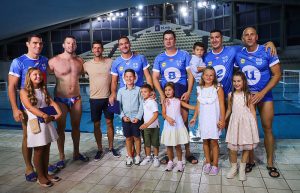 It was magnificent. I am very happy because I ended my career in the national team in this way, with teammates with whom I spent the past 20 years of my life. The four minutes in the water were enough for me to again feel the tension of playing for the national team. We enjoyed this evening and we will be big fans of the new generation of Serbian water polo

“We were growing as players and a team together for more than a decade. It’s very nice that we ended our national team careers together and in an excellent way – with the Olympic gold and with this spectacular ceremony

“I see this evening in another way. It wasn’t fans’ “Thanks” to us. We thanked them. Throughout our careers we played and won medals for our nation, for our people. We passed everything during the years that passed and remained strong and united. The results prove that”

Thanks to everyone who was with us for all of these years – our families, coaches, fans… It’s hard to single out one of the medals as the most significant. There were many. But, gold at the 2009 World Championships, when our generation played for the first time together at a major competition, and the first Olympic gold, in Rio are my dearest trophies

As for the game Croatia – France, the French dictated the pace at the beginning, earning a 3:0 lead. The Croats got on the scoreboard only in the 4th minute, but they netted four goals in less than three minutes and went ahead at 4:3. Still, the French leveled by the first break.

The second period belonged to the French, who had a 7:5 advantage. Croatia’s youngest player Marko Zuvela halved the distance just 16 seconds before the final break. The teams were neck and ech unit;  10:10 (22nd minute). After that, the Croats produced a 3:0 run, went to 13:10, and secured a win.

In the fourth quarter, the six retired aces played for Serbia along with Sava Randjelovic. The catch was ended in the 28th minute.