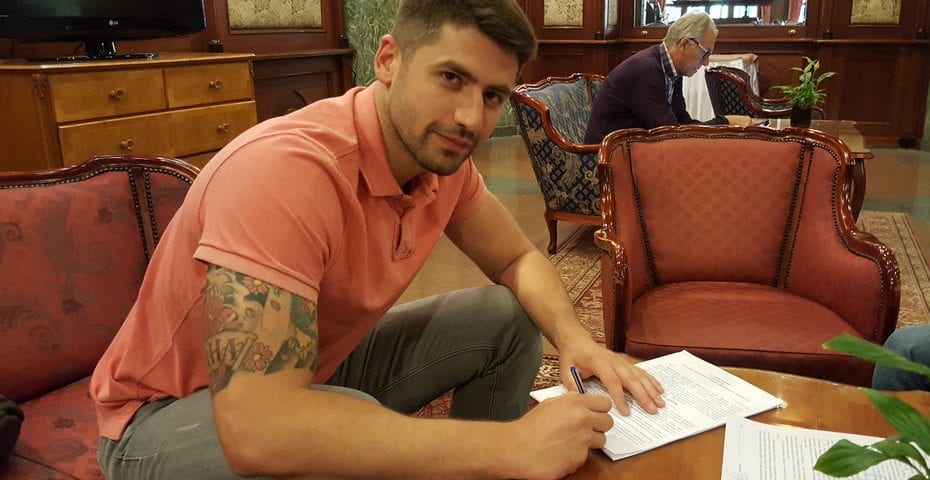 Last weekend, AEK Athens achieved the most significant success in the club’s history – it secured at least 2nd place in the Second League and advanced to the A1 Greek division.

The recently re-established club from Athens, obviously, has high goals and started to compose a strong team for the next season.

Radjen started playing water polo in Vojvodina. In 2002, he arrived at Partizan. After he won the Champions League with Partizan, he played for Chios (2011-2012), Crvena Zvezda (2012-2014), Olympiacos (2014-2015). He was suspended for two years because of the positive doping test. He managed to return to high-class water polo after the suspension and continued the career in Oradea (2017), Dynamo Moscow (2017-2019). Last summer, he returned to Crvena Zvezda.

A few days ago, he arrived in Athens from Belgrade to finish the negotiations with AEK.

“I have friends here in AEK, starting with the team’s coach, Konstantinos Dandolos. I feel the obligation to share my experience and my knowledge of polo with my friends in AEK”, Radjen said for the website “Aquafeed24.com”.

Radjen won’t be the only AEK’s reinforcement this summer, for sure. The Greek media writes that the club negotiates with Konstantinos Flegkas (31), the goalkeeper who won the bronze medal with Greece at the 2015 World Championships. He plays for Panionios.

The transfer market in Greece officially hasn’t started since the season still hasn’t been finished. Surely, it will be a lot of changes in several clubs. Three foreigners already left the new-old Greek champion Olympiacos: Maro Jokovic (Brescia), Ivan Buljubasic (Trieste), and Stefan Zivojinovic (Noisy-le-Sec). Stefan Mitrovic still hasn’t left Olympiacos, but he is close to the exit doors. He said that he would play in the Greek League next season, but Mitrovic is not sure if he will stay in Olympiacos.

Radjen is the second player who, officially, left Crvena Zvezda this summer. Last week, Marko Jankovic departed the former European champion and returned to Sabac. Russians Viktor Ivanov (goalkeeper), Ivan Gusarov, probably won’t stay in Crvena Zvezda, but the club has brought a few very good players. The latest additions are Gavril Subotic and Ivan Basara, who played in Hungary in the previous season. Gavril Subotic arrived from Szolnok and Basara from Szentes. The two played together for Partizan a few seasons ago (Subotic started his career in Jadran Herceg Novi and Basara in VK Beograd). After Partizan, Subotic was a player of Posillipo, Dynamo Moscow, and Szolnok. Basara played for Vojvodina, Radnicki, while he was in Hungary from 2015 (PVSK, Szeged, AVUS, Szentes). Before Subotic and Basara, two young players came to Crvena Zvezda – Lazar Vickovic and Petar Smiljevic (both from Partizan)

The latest news from the Hungarian transfer market is that a 22-year-old goalkeeper Kristof Devai, who left Vasas, joined OSC Budapest.

As we already reported, OSC won’t have foreigners in the team in the next season. All foreign players who were members of OSC found new clubs. The last one was the Montenegrin Aleksa Ukropina. He announced that he would join Primorac Kotor. Before coming to OSC (where he spent two seasons), he played for Jadran Herceg Novi.

This week, the General Assembly of Primorac will be held. It is expected that Mladjan Janovic will officially become the club’s president. After that, the talks with Sandro Sukno should be resumed. Sukno was offered to become Primorac’s head coach, but the negotiations were stopped because of the coronavirus pandemic.

Most of the best Italian clubs already composed their squads for the next season, but the news about transfers is still coming. Roma Nuoto brought its first reinforcement. Last week, Giacomo Casasola (30), the former center-forward of the Italian national team, came to Roma, after two seasons in Sport Management. Earlier, he played for Lazio, Ortigia…

Many players left Sport Management. The club still hasn’t brought new players, according to the official information. But, the management is in talks with several players.

A few days ago, the Italian Swimming Federation (FIN) decided that Metanopoli Milan will replace Canottieri in the Serie A1. Canottieri withdrew from the first league, and it will compete in the A2 league next season. Before the cancelation of the season, Metanopoli was in the 1st place of the Group “North” of the A2 League. The Milan-based club will renovate its team. To date, several players have arrived: Lorenzo Bianco and Giovanni Bianco (both Savona), Matteo Monari (Bogliasco), Roberto Ravina (Sport Management), goalkeeper Leonardo Cavo (Lerici Sport). The new head coach will be Fabio Gambacorta, a former player of Posillipo, Florenzia, Bogliasco, Acquachiara, who finished his playing career in Lerici this year.