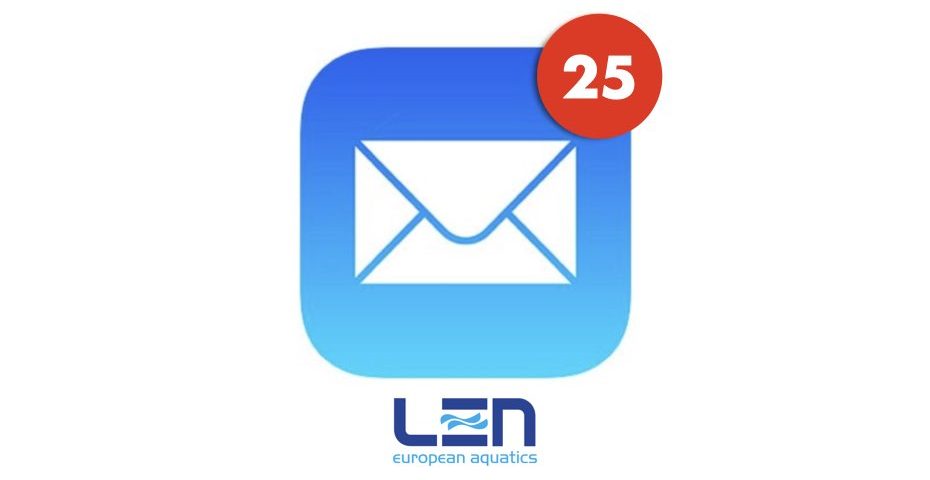 There’s a quote from Black Adder that perfectly describes the tactic LEN seems to employ in all its operations. It goes like this: “If nothing else works, a total pig-headed unwillingness to look facts in the face will see us through.”

Despite the fact that 24 European federations made a request to LEN’s General Secretary for an Extraordinary Congress (February 5th, 2022), Barelli is still working hard to do everything possible to deny this request happened.

On September 25th, European federations decided that they don’t support the work of LEN Bureau and called for an Extraordinary Congress where new leadership would be elected. But LEN didn’t bother to include the decision in their official press statement. If they don’t admit it, it never happened?

I already wrote about that in my No Poolshit article LEN Bureau has fallen, published two days after the Congress. This was the first article in the world to cover the events in Budapest. Other (aquatics and news) media outlets began to report on it the next day.

Only on Sep 30th did LEN send out a new press release. 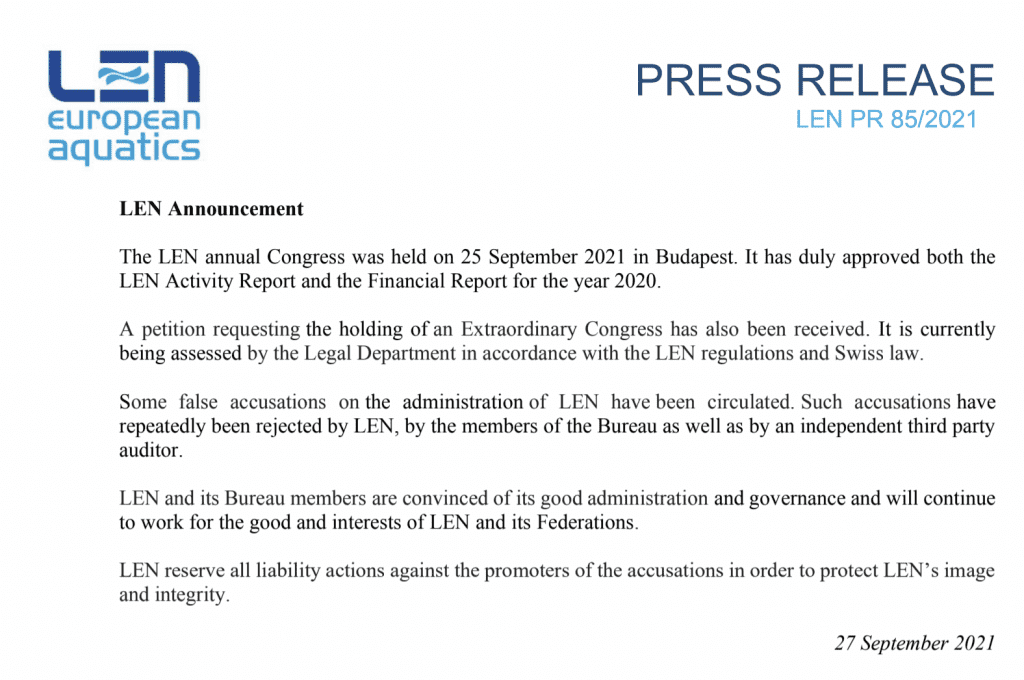 As you can see, the date on this document matches the date on my No Poolshit piece, proving my point that they hoped no one would notice. Only after the story broke did they admit that the request had been made.

This press release is yet another example of the well-documented lack of professionalism. The press release spends 60% of its time talking about someone making false claims against the LEN administration.

Who is making these claims? What are they? Who decided they are false? If you send that out to a journalist, we would really like to know more about it. Or are you just trying to execute the worst spin ever?

If LEN had any integrity (as they claim in their PR), they would have declared by now that an Extraordinary Congress will be convened in Paris on February 2, 2022, and invited members to run for open posts.

But they did nothing for over a month. Just Barelli making phone calls, attempting to squash freshly developed opposition and persuading his people that he still has control and that they should remain loyal.

Last week, 25 federations (one more than in the September congress) wrote a reminder to LEN President Barelli and General Secretary Sparkes that the Extraordinary Congress must be announced, and they verified this with their signatures. Each of those federations received an email from General Secretary David Sparkes on Monday, requesting an official letter signed in original by a person duly authorized to sign on the behalf of the Federation. 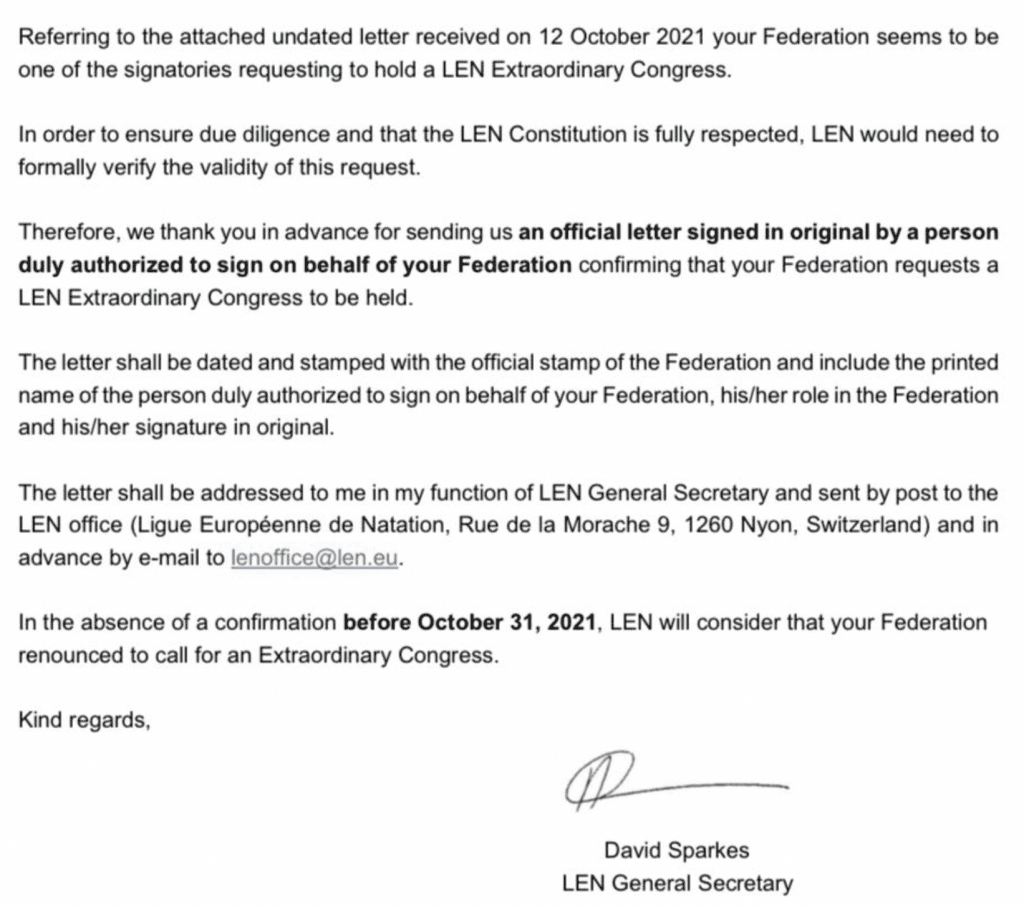 David Sparkes is the same person who received the first request in Budapest Congress. The congress, which was attended by authorized representatives from the federation.

Mr. Sparkes, on September 25th, you received the document with the request containing 24 authorized signatures.

On the 12th of October, you received the identical request via email with 25 signatures.

Once you’ve received all of them, I strongly advise you to engage a signature specialist. I wouldn’t be surprised if they claimed some signatures didn’t arrive on time. Discrediting democratic vote is standard procedure for oppressive, autocratic organizations. But surely LEN isn’t like this?

It would be very funny if they tried to do something like this, because they don’t have a good track record understanding how email and correspondence in general work. Let me show you this example:

Meanwhile, LEN keeps building their image and integrity in the water polo community.

After the ridiculous Champions League qualification where some clubs had to play 6 games in 5 days (some with less than 3-4 hours between games), where referees didn’t have official uniforms, and where organizers didn’t receive official balls, the newest gem from Birri’s workshop is European Championship qualification.

Federations received an email in August informing them that they can apply for the first round (lower level nations) of EC qualification, which will take place in early November (5th-7th). The deadline for applications was September 1st 2021.

In the first week of October, Total Waterpolo received inquiries from 5 federations who applied for the first round where they asked us if we have any additional information on where and when the first round will take place. They wanted to book hotels and plan their trips. Some of them were spending money preparing for the tournament that was supposed to take place in less than a month. Many players needed to take time off from their work to be able to participate.

Well that is not Birri’s problem… On October 10th (after receiving several emails from federations regarding this topic), my favorite branding specialist decided to finally announce that the first round won’t be played since there weren’t enough federations who applied. So from the moment he realized he doesn’t have enough teams it took him only 40 days to write a simple email with that basic information.

And yet, he was faster than General Secretary Sparkes. 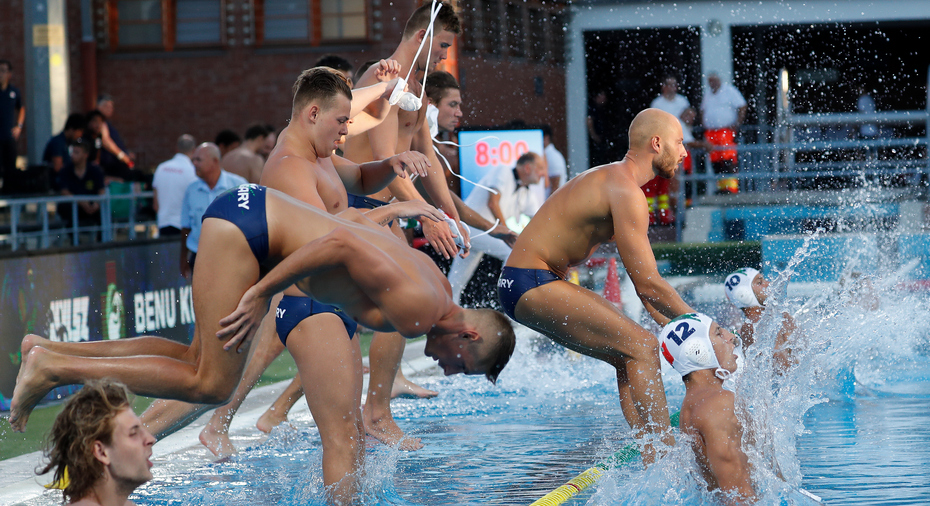 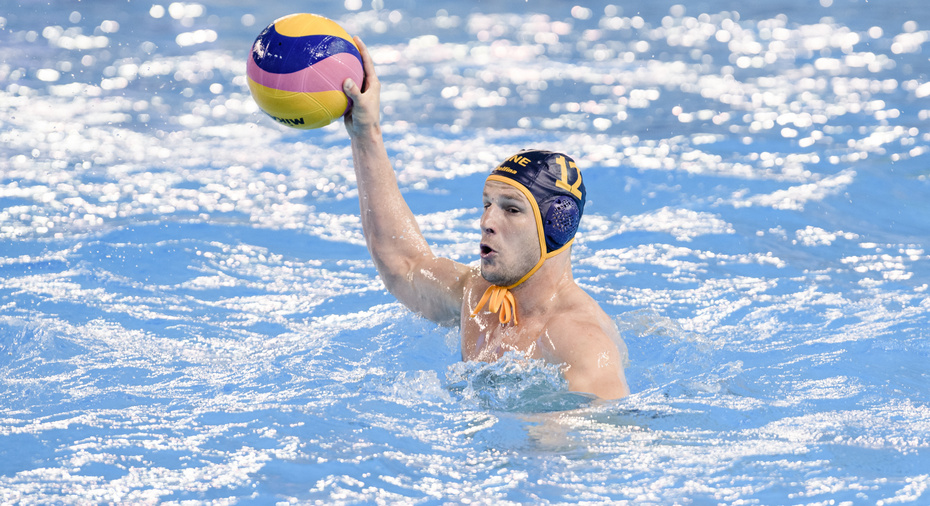 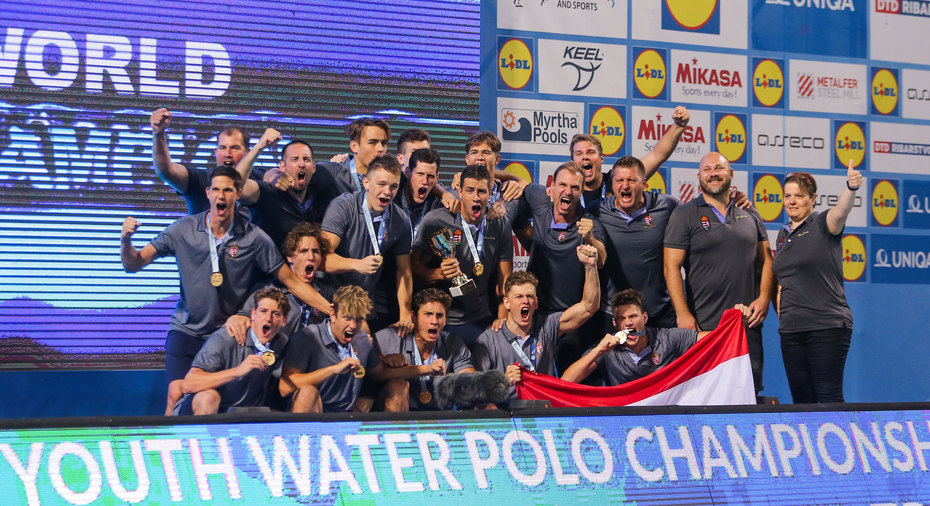