Besides Sandro Sukno’s arrival at Pro Recco, a few interesting pieces of information have come from the transfer market today.

Left-handed players have been in the spotlight today.

Brescia, the Italian champion, announced that left-handed Boris Vapenski signed a one-year contract with the club. Boris Vapenski (31), a Serb who plays for Georgia now, arrives from Dinamo Tbilisi. He started his career in Vojvodina Novi Sad, and after that, played for Crvena Zvezda, Ortigia, and Dinamo. He won the bronze medal at the 2010 European Championship representing Serbia and the 2013 Champions League with Crvena Zvezda.

Maro Jokovic, a left-handed goal-getter of the Croatian national team, left Brescia after one season spent at the club. It’s most likely that he will return to Jug Dubrovnik.

Serbia’s leftie confirmed arrival at Novi Beograd ten days ago, after winning the Champions League with Pro Recco. He was voted the MVP of the tournament, which was held at the SC “11 April”, the home pool of Novi Beograd.

Obviously, this pool “suits” me. I won the Champions League here. I hope that I will have success in the SC “11 April” with my new club, too. I am glad to be back in Serbia and be part of WPC Novi Beograd and this excellent project. A new strong club will help develop Serbian water polo, Mandic, who celebrated his 27th birthday today, said.

Vladimir Vujasinovic, Novi Beograd’s head coach, summarized the previous season. The team finished 2nd in the Serbian League and debuted on the European stage. Vujasinovic said something about the plans for the following seasons:

We have been building a new team since December. We managed to bring most of the players we negotiated with, but the team hasn’t been complete yet. We are in talks with a few players. I hope that we will be able to announce our roster in a few weeks. With a team like this, we have high ambitions. Our long-term objective is to win the Champions League. It won’t be easy to achieve that goal, especially in the next season, but we aspire to win the European title. 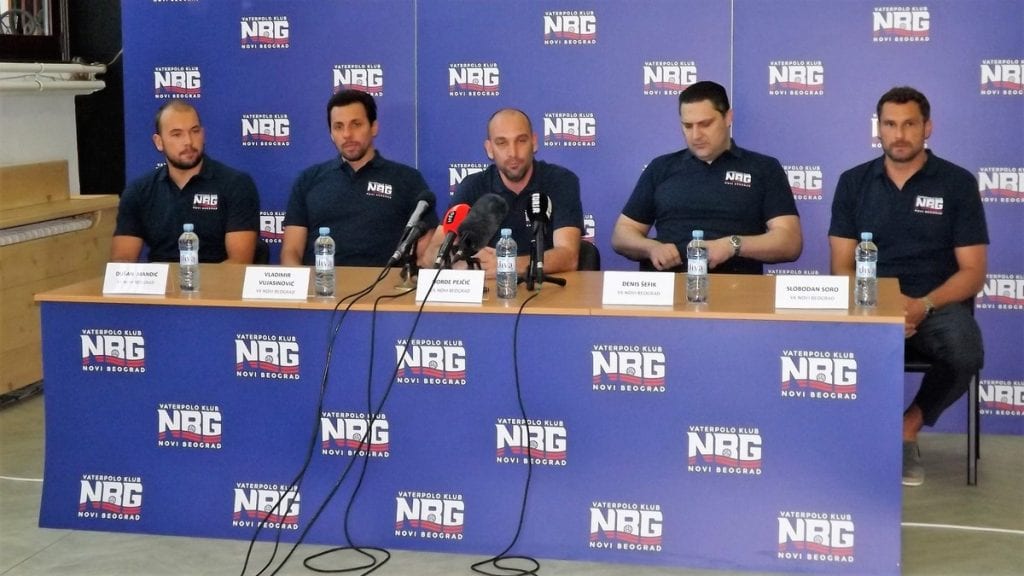 Vujasinovic welcomed Mandic, as well as two newcomers to the club’s management. Two former great goalkeepers of the national team of Serbia and Yugoslavia Denis Sefik and Slobodan Soro were also presented by the club today. Soro will work as a sports manager, while Sefik will be a General Board member with duties to coordinate with the sports sector.

Sefik said that his longtime teammate from the national team Aleksandar Sapic had invited him to come to Novi Beograd. Soro underlined that an offer to join Novi Beograd’s management arrived just after he ended his career. He retired three weeks ago (Soro’s last club was Lazio)

Both believe that Novi Beograd has a team that can reach high goals. Soro and Sefik said that they were glad to get an opportunity to work in a good environment in the club, which is growing day after day.

Djordje Pejcic, the club’s director, said that Novi Beograd was founded six years ago and went step by step. They formed all junior and youth teams and worked hard to build a good working system in the club.

All in Novi Beograd are aware of the fact that they have to work hard to win the trophies,

“We will have strong opponents not just in the Champions League, but in Serbia, too. Reigning champion Radnicki, Crvena Zvezda, Partizan, Sabac will be tough rivals.”, Slobodan Soro said.

Serbian League is getting stronger

Other Serbian clubs have also been getting stronger and stronger.

This summer, Olympiacos has been reinforced by one of the best goalkeepers in the world Marko Bijac, and will have two strong goalies in the team.

The Greek champion announced that Emmanouil Zerdevas, the goalkeeper of the Greek national team, would stay at the club. He signed a new three-year contract, the club said today.