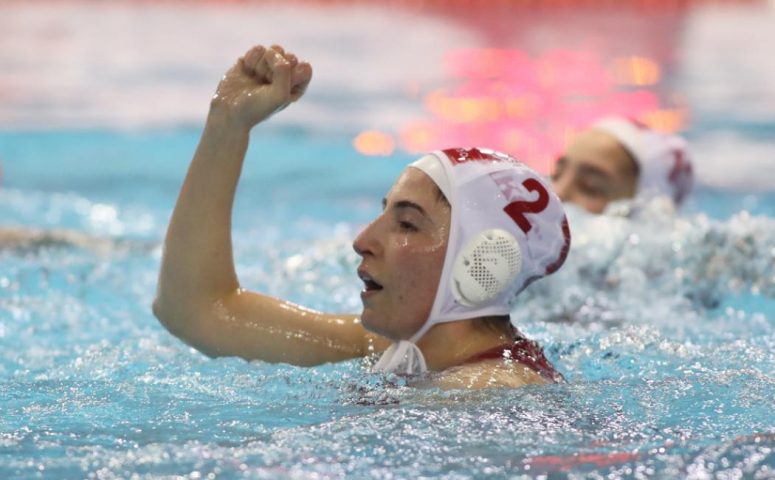 Sabadell and Olympiacos both look set to book their place in the semi-finals of the Euro-League after both racked up decent leads to take into their second legs. Both have a five goal advantage in the tie (Olympiacos 14-9 Dunaujvaros, Ethnikos 8-13 Sabadell) , with the reverse fixtures to be played on the 26th February. It’s still all to play for from a UVSE point of view, who only have to overturn a one goal deficit on their return to Budapest against KINEF. The last quarter-final, between Plebiscito Padova and Dynamo Uralochka is yet to be amidst COVID restrictions calling off the game.

KINEF Kirishi ran out eventual 9-8 winners against a gritty UVSE, but the tie is far from over, as Marton Benczur’s side definitely have a game to play for in the second leg back at Hajos in a few weeks.

The experienced Russian international’s Ekaterina Prokofyeva (2) and Nadezhda Glyzina (2) were both on target for the home side, while Rita Keszthelyi-Nagy grabbed a brace for UVSE, as she followed the lead of the ever-growing talent, Kamilla Farago – who secured a Euro League hat-trick. 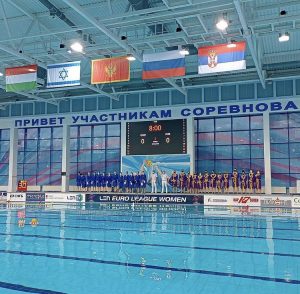 Anna Karnaukh had a notably strong game in goal for the hosts, making in particular an outstanding close-range save from a Natasa Rybanska shot on 2m that may well have kept KINEF’s slender lead for the second leg.

The match itself was tight from the start, and the game was very low scoring in the first two periods. But the game swung in the favour of the Russians in the third period as they netted three unanswered goals in less than two minutes from Ryzhkova, Prokofyeva and Evdokushina.

It is hard to assess who will be the happier side, but in all likelihood, Marton Benczur will be content to return to Budapest only trailing by a single goal. Aleksandr Naritsa, the KINEF Head Coach, will have perhaps hoped for a bigger lead to take into the second leg, but will be satisfied that his side controlled several aspects of the game well.

Reigning European champions Olympiacos have one foot in the semi-final of the LEN Euro League with a convincing showing over their Hungarian guests, Dunaujvaros. The Greek side, under the tutelage of Aleksandar Ciric, blitzed the first quarter to take a 5-1 advantage – a lead that Dunaujvaros could not ultimately recover from.

It really looked like it could get messy for Attila Mihok’s side when Eleftheria Plevritou netted a fourth quarter quad, but a brace from Krisztina Garda in the last period just about keeps Dunaujvaros in the tie. But in truth, the chances of the Orange and Blue of Dunaujvaros progressing to the final 4 is very slim, with the Hungarians needing a miracle if they are to deny the Greeks a chance to retain their title.

Olympiacos’s quality really showed in the game, with the attacking prowess of the likes of the Plevritou sisters, the Canadian Kyra Christmas and the young Maria Myriokefalitaki, who bagged three in the match.

With Olympiacos securing a solid victory, all eyes would see how Sabadell would compare against Ethnikos in Athens. The result was a well earnt victory, which sees them looking good for a place in the semi-finals. Their opponents, Ethnikos,  were not clinical enough on the extra-man plays and were just off the pace.

Central to Sabadell’s success, as it has been so often this season, was yet another impressive goal haul for Judith Forca Ariza. The five goals she netted this evening takes her goal tally in the Euro League this season to 33.

The game itself was, for the main, as close as it was billed. The score was tied at 8-8 in the third period, but two late goals in the quarter from Maica Garcia and Maartje Keuning gave the Spanish side some breathing space, before Sabadell saw out the game with three unanswered goals in the last (Judith Forca 2, Keuning).

There is still no more information about the tie between Plebiscito Padova and Dynamo Uralochka after the game was called off yesterday. You can read more about that story here.