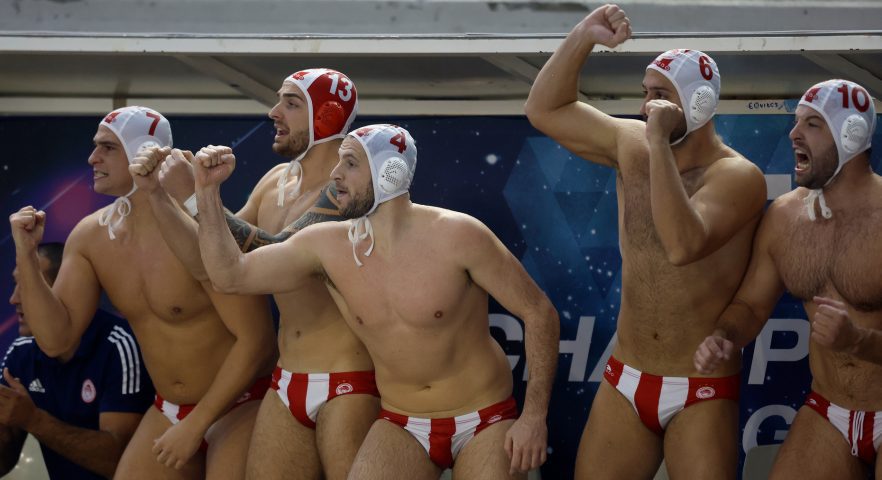 Olympiacos defeated European champion Pro Recco – 9:7 in the super derby on Day 1 of the Champions League Group A, played in Piraeus.

The big rivals played two completely different games in one. In the first 24 minutes, both sides displayed excellent defensive play. Both teams have outstanding goal getters on their rosters, but before the fourth period, the score was 3:3. The second match started after the last break. Ten goals were scored in the final period and the Greeks recorded a 9:7 victory. Olympiacos was two goals ahead of Pro Recco after the final buzzer, but the game was open until the end. This is Recco’s first loss in all competitions since January 12, and an 8:11 defeat to Jug in Dubrovnik in the 2022 Champions League.

An encounter between Radnicki and Vouliagmeni in Kragujevac was very exciting, too. Both teams had ups and downs and shared the points in the end (9:9).

All in all, this evening was very successful for the Greeks.

The big derby didn’t disappoint water polo fans. The two giants played an excellent match. In the first three quarters, they proved that they had excellent defenders, and goal-getters stole the show after the last break. 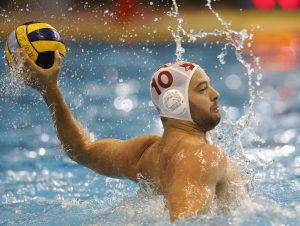 Although Marton Vamos scored an opener already in the 2nd minute, the first three quarters of the big derby in Piraeus were a hard defensive battle. Pro Recco had more opportunities to score in the first half, but Olympiacos’ defense and goalkeeper Bijac were up to the task. The European champion got on the scoreboard only in the 10th minute when Gergo Zalanki converted a man-up. Immediately after, Marco Del Lungo saved Vamos’ shot from the 5m spot. 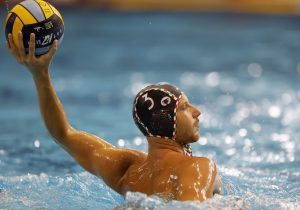 In the 14th minute, Filip Filipovic ended Olympiacos’ goalless phase that lasted 12 minutes. Former Serbia’s captain found the net from the deep right, and the Greeks earned a 2:1 advantage before the middle break.

In the middle of the third period, Pro Recco went in front for the first and the last time. Early in the second half, Cannella made it 2:2. In the 20th minute, Gergo Zalanki added his second goal and Recco took a 3:2 lead. But, Fountoulis replied immediately – 3:3. That was the score before the final eight minutes.

After the last break, the great defenses disappeared, and the match turned into a festival of goals. Four goals were scored already in the first two minutes of the final quarter. The hosts opened the fourth period with two quick goals. Filipovic scored from a 6 on 5. Mourikis scored a nice goal from a close-range shot after an excellent assist from Papanastasiou – 5:3. Younger halved the deficit from a penalty shot, but Buslje gave Olympiacos a 6:4 lead. 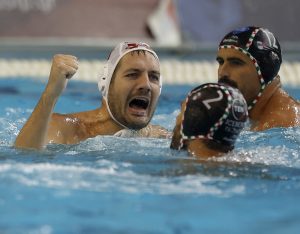 The Greek side kept a 2-goal distance for a while, but Recco earned a new penalty. Zalanki took responsibility this time and sent the ball into the net for 5:6.

The exchange of goals continued until the end. Before the final minute, Olympiacos led 8:7. Pro Recco had a chance to level from a counterattack, but they slowed that attack. At the end of the possession, Younger got his shot blocked with 37 seconds left on the clock. Olympiacos’ coach Igor Milanovic called a time-out to set up the final action. It was a long attack, which was finished by Alexandros Papanastasiou, who netted from the left with 11 seconds to go, and that was the end. The stands “exploded”. Olympiacos’ fans started celebrating the win. Recco couldn’t score a consolation goal in the remaining time. 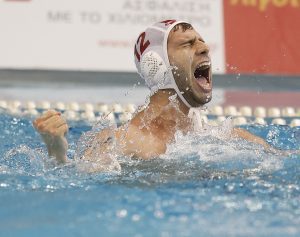 Recco’s Zalanki was the best scorer with four goals, but the MVP of the derby was Filip Filipovic, who contributed to Olympiacos’ victory with three goals, two blocks,s and one steal.

After the first half of the encounter between the Serbs and the Greeks in Kragujevac, it seemed that Radnicki would record an easy win. Troulos scored the first goal in the match to give Vouliagmeni a 1:0 lead in the 2nd minute. However after that and until the middle break, Radnicki’s defense was superb. The hosts started building a big advantage step-by-step. They went to 3:1 with three goals in the last three minutes of the first period. By the end of the first half, the Serbs stretched the margin to four (5:1).

But, the Greeks regrouped themselves during the middle break, and showed something of their best in the third period. They netted three goals in the first three minutes of the second half and quickly cut the deficit to one (4:5). But, that wasn’t the end of their series. Papasifakis leveled at 5:5 in the 22nd minute. Shortly after, Kalogeropoulos put Vouliagmeni in front – 6:5. The Greeks were a far better rival in the third quarter. Radnicki could be satisfied because it didn’t concede more than five goals. 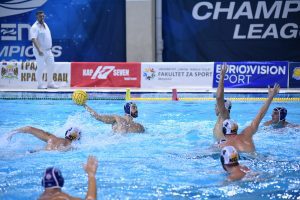 Radnicki re-called its rhythm from the first half and quickly regained a lead. Radulovic leveled, while Vrlic made it 7:6 . But, Nikolaidis replied for 7:7. The Serbs managed to make a 2-goal difference in the 29th minute (9:7). Still, Vouliagmeni didn’t say its last word. The man of the match Nikolaos Papasifakis scored his 4th and 5th goals within 40 seconds and leveled at 9:9 with 02:02 minutes left on the clock. Vouliagmeni had the chance to earn all three points because it had the last attack in the match. However, Chalyvopoulos’s shot went wide with two seconds to go. Radnicki called a time-out after that, but only a miracle can happen in two seconds. Today, there were no miracles. Vouliagmeni can be happier with this outcome. Each point won in away matches in the Champions League is very valuable.

Jadran Split opened the season with a victory in Hannover, but it wasn’t an easy win as some expected. The visitors broke the German’s resistance in the final eight minutes.

The Croats arrived in Split with only one goalkeeper – Ivan Marcelic (the second goalie, Anic, is injured). In the first 24 minutes, the game was an equal battle, but the German champion led most of the time. Hannover built a 2-goal lead at the finish of the first quarter (4:2). Buric converted a man-up in the dying seconds (3:4). The Croats added two unanswered in the second period and took a 5:4 lead. Still, Hannover made a new turn. The home side equalized before the middle break (5:5) and regained a 1-goal lead in the third quarter (6:5, 7:6). In the fourth quarter, the rhythm of the game completely changed. Jadran proved it was a team of better quality than the hosts, scoring four goals in a row. A minute and a half before the end, Buric scored from an extra for 10:7 and sank all Hannover’s hopes. Hrvoje Benic, who arrived at Hannover from Jug this summer, set the final score – 8:10.

Barceloneta left Tbilisi with the points it counted on, but Dinamo proved it could cause headaches for the favorites. Dinamo dictated the pace in the first quarter and entered the second period leading 4:2. However, Barceloneta took control in the second period. The Spaniards, led by Felipe Perrone, scored five goals in a row and turned around the 2-goal deficit to a 7:4 lead. The hosts reduced the gap to two twice (5:7 and 6:8), but nothing more than that.

Barceloneta tightened its defense in the second half and conceded only two goals. The visitors dominated, and the match ended as expected. Dinamo can’t be satisfied with the outcome. Still, the Georgians proved that they had made progress compared to the previous season when they suffered a 7:20 home loss to Barceloneta.