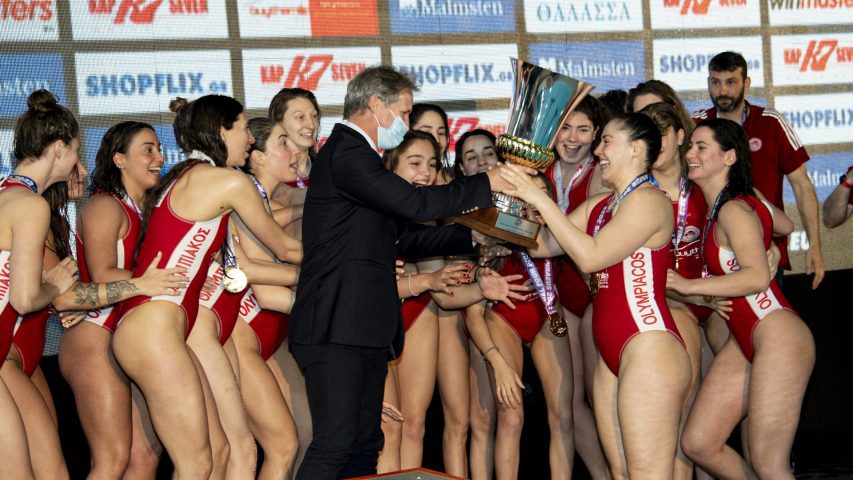 Olympiacos have won the Euro League for the second successive year after a really confident display over Sabadell, winning 11-7.

Winning the competition for the third time in their history in front of a jubilant home crowd, Olympiacos become only the 5th club to win the competition on three occasions, and the 7th side to retain their European title.

The result caps off a good week for Greek Women’s water polo, after Ethnikos secured the LEN Trophy earlier this week in Athens.  They are both right up there amongst the very best clubs in Europe.

Olympiacos Head Coach, Aleksandar Ciric, has retained the European title that Charis Pavlidis won last season with the Greek side – a huge achievement in his first season at the club.

For Sabadell, it is a bitter disappointment for them. David Palma’s side gave it everything, but were outworked and out-thought by the Greeks. The Spanish side are still ahead of Olympiacos with 5 Euro Leagues, but that won’t provide any of the Sabadell players any solace tonight. Sabadell can’t let this result knock them, and I doubt it will. As soon they will have to fight Mataro for the Spanish title.

Young Maria Myriokefalitaki will get the plaudits for her hat-trick in the pit tonight, but so much of what this Olympiacos side is about stems from the three Plevritou sisters, who were all immense today. Nikoleta Eleftheriadou also deserves a big mention from today, while both of Olympiacos’s keepers, Chrysoula Diamantopoulou and Ioanna Stamatopoulou, were in fine form – supporting their team in a big way.

Sabadell’s bigger players weren’t at their best tonight, but that is more down to how Olympiacos defended. Maggie Steffens played well from centre (2), but Judith Forca was untypically misfiring on the right, and Maica Garcia and Gurpreet Sohi were quiet for large parts of the game.

The crowd, as ever, was highly charged, adding to a really special atmosphere inside the Papastratio Swimming Pool, a reminder of what an important game this was for both of Europe’s elite female clubs. The celebrations at the end were unbelievable, with poolside fireworks and confetti. Many of the crowd stayed minutes after the game to celebrate. The bond between the players, the club and the fans is one of the best sights in World water polo, and the envy of every club around the globe.

The trophy looked like it may have been damaged when it was handed to a member of the crowd before being dropped from a considerable height. Fortunately it looks to be in one piece. 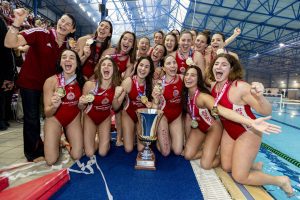 As for the game, Olympiacos absolutely flew out of the traps taking a 3-0 lead. Some are sceptical about what sort of impact a good home crowd can have, but It really seemed like the energy from the fans transmitted into their teams energy in defence, and courage in offence.

Sabadell survived the initial onslaught and settled down a little bit, but they were not creating enough to break down a really well-organised and dynamic Greek defence. Olympiacos’s initial attacking strength was curtailed in the second, but having built a three-goal lead, scoring was not as necessary.

Sabadell were right back in the game in the third period, clawing themselves within two goals on three occasions in the match. But it just seemed for a time that they couldn’t quite keep Olympiacos out after they scored themselves.

And that was the problem really. They just couldn’t make up for their first quarter. If the game had started in the 2nd period, Sabadell may well have stolen the win, but at this level of competition, against the quality of opposition such as Olympiacos, you cannot afford to give away a three goal lead. 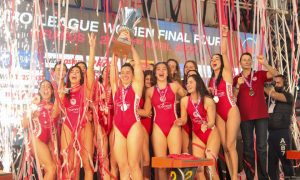 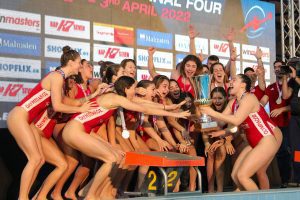 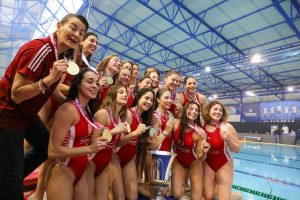 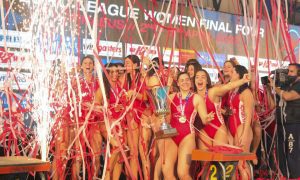 Sabadell won the sprint to an outcry of booing from the partisan crowd, but that was nothing compared to the noise the crowd made when Vasiliki Plevritou scored the first goal of the game. She was on the left side, a position she so often occupies, and rifled the ball past Laura Ester in the Sabadell goal to make it 1-0.

Sabadell’s first chance was predictably from Judith Forca. Her shot rattled the bar, perhaps after a small touch from Chrysoula Diamantopoulou.  It was Forca Ariza who had another chance moments later when Vasiliki Plevritou was excluded, but Nikoleta Eleftheriadou did well to get an arm in the way, much to the crowd’s excitement.

Olympiacos stayed strong, and were suffocating Sabadell. Firstly Maica Garcia was excluded harshly from the pit before Eleftheriadou made it 2-0 with a near-side shot past Ester.

The crowd packed inside the Papastratio swimming pool were deafening, pushing their side every step of the way. There was a huge roar when Chrysoula Diamantopoulou saved a shot from Maggie Steffens, before an even louder roar when Eleftheria Plevritou made it 3-0 from the perimeter.

Sabadell looked uncharacteristically shaken and nervous. Van der Sloot had an opportunity from a central position, but again, Diamantopoulou made an excellent save with her head.

The first bit of good news in the game for the Spaniards was when Vasiliki Plevritou skied her penalty, given away by Steffens.  But the American climbed high from a Van der Sloot pass to tap in Sabadell’s first goal of the game to get David Palma’s side rolling.

However, with 40 seconds left in the quarter, Kyra Christmas received the ball for the first time, and beat Laura Ester at her near post to make it 4-1 at the end of the quarter.

At the start of the second period, Olympiacos thought they should have had a penalty when Eleni Xenaki looked like she was impeded, but the experienced Serbian referee, Ivan Rakovic, waved away the appeals led by Olympiacos’s ever-dynamic, Aleksandar Ciric. 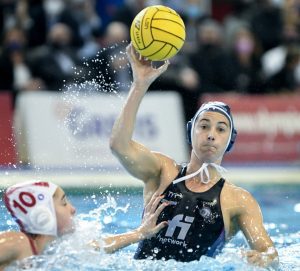 Sabadell created the first man-up situation when Brigitte Sleeking was dismissed. Judith Forca kicked up high after a few fakes, but couldn’t beat the strong block of the Canadian left-hander, Kyra Christmas.

Every time Sabadell had the ball, there were rapturous jeers ringing around the pool. It may have put the Spaniards off, but Chrysoula Diamantopoulou seemed to thrive off the noise, saving a shot from Judith Forca from out wide, and a close range shot from Maica Garcia Godoy.

Half-way through the period, Ciric decided to call the time out, and it worked a treat when the dominant Maria Myriokefalitaki expertly turned and shot from the pit.

Sabadell needed to close the gap quick, and Sabrina Van der Sloot was on hand to drive the ball past Diamantopoulou to make it 5-2.

Sabadell then had a great chance to make it 5-3 from Eleftheria Plevritou’s harsh exclusion from centre. David Palma called the time out to give his side some direction, but Nikoleta Eleftheriadou was on hand to cut out a wayward Sabadell pass on the top.

The end of the quarter was without much action. Irene Gonzalez had a tame shot blocked by Sleeking, while Tina Siouti had a optimistic attempt well cut out by Judith Forca.

For the second half, Olympiacos changed up their keeper, replacing Diamantopoulou with Ioanna Stamatopoulou, and Stamatopoulou was lucky that her first action was not to grab the ball out of her own net – as Maggie Steffens’ shot from centre was a whisker wide of the frame of her goal.

Olympiacos were still pushing to score. Eleftheria Plevritou had a shot from position 2 scrap Sabadell’s side netting. But it was Sabadell who grabbed the next goal, an important one, as a well-worked move from the Spaniards found Brigitta Games alone on the post to put Sabadell back within two scores (5-3).

However, Maica Garcia was adjudged to foul Maria Myriokefalitaki – who took full advantage, converting on the man-up that she had won to put the score at 6-3.

But Sabadell were now finding a way through Olympiacos, as first Nona Perez scored a nice goal to put Sabadell back within two with three minutes left in the period, before Gurpreet Sohi should have made it 6-5 on the man-up.

The Canadian captain was then ejected, leading to a wonderful goal from Olympiacos’s captain, Margarita Plevritou. Plevritou caught the ball from a cross-face position, before cleverly finding the corner with a no-look shot.

But again, Sabadell replied immediately, as Judith Forca finally found the net for the first time. On the right, her shot was perfectly placed, smashing the far right post before creeping past Ioanna Stamatopoulou. 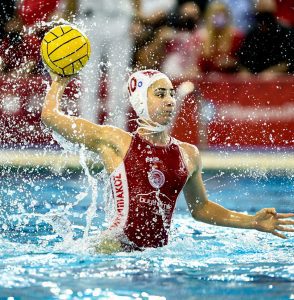 With ninety seconds to go in the period, the game was now really getting tasty.

But when Nona Perez naively fouled Kyra Christmas when she was swimming through  1 on 1 with the keeper, Nikoleta Eleftheriadou scored her second of the game from a 5m penalty that clipped the inside of the post to make it 8-5.

Into the last quarter, the fans in the stands were absolutely bouncing, knowing their side was only eight minutes away from a third European title.

But the visitors struck first in the last quarter from a lovely palmed goal from Maggie Steffens. In the pit, she pulled away from her player. The pass from Judith Forca was perfectly placed, and Steffens made it 8-6.

Now it felt like a really big time for Sabadell to find the next goal. If they could, you’d think the whole dynamic of the game could change. But Eleftheria Plevritou had different ideas. She had time and space to threaten the goal, and when she let fire, her powerful shot struck the right-hand post of Laura Ester’s goal before hitting the back of the net.

Monika Eggens’s shot then caused some controversy, as her lob looked to have crossed the line, but when Ursula Wengenroth consulted VAR, she correctly ruled the goal out.

There was then a big moment in the game when Olympiacos sealed the game. Maica Garcia Godoy was wrapped on three exclusions, and although she had worked hard throughout the game, but barely really made an impact. Aleks Ciric called the timeout, but Vasiliki Plevritou finished the move off to once more give Olympiacos a 4 goal lead.

It now looked impossible for Sabadell to come back from this. They had been better in the last two periods, but just couldn’t find a way to score. Van der Sloot first had a 6m shot blocked well by Jordan Raney, before Monika Eggens couldn’t fire past Stamatopoulou from 2m.

Before long, Sabadell seemed to become ill-disciplined, and another Nona Perez exclusion led to Maria Myriokefalitaki hat-trick.  With a 11-6 lead, the Euro League trophy was certainly heading back to Athens.

Irene Gonzalez scored a tidy goal with 36 seconds left, but it was hardly a consolation for Sabadell, who have lost the Euro League Final for the second time against Olympiacos in recent years (2015). 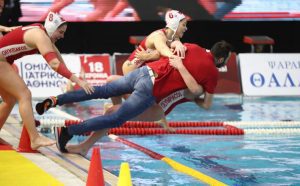 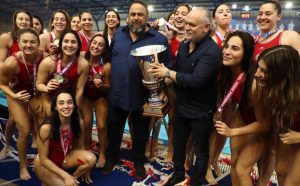