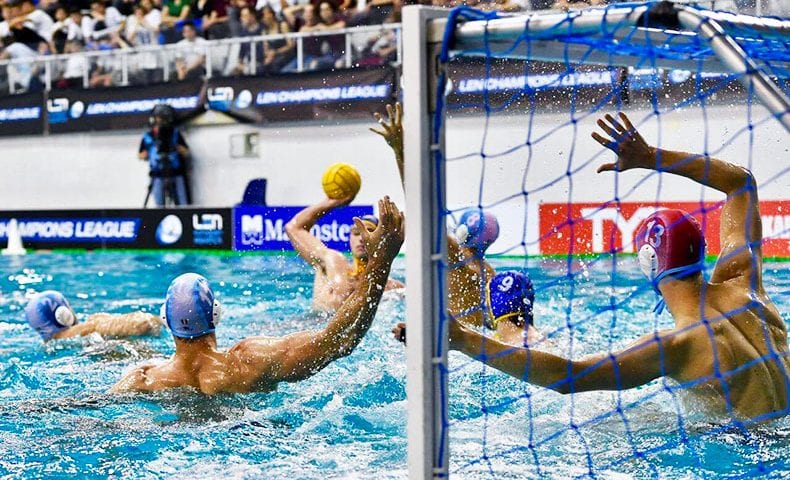 Olympiacos won the thrilling battle of the champions so the title-holders earned a 3-point lead ahead Szolnok and that might be the end for the 2017 champions from Hungary. Recco made a perfect 10 on Day 10 by downing Barceloneta and since Dynamo upset Brescia, Ferencvaros, beating fellow Hungarian side Eger, is back on track in the hunt for the second place of Group A. The hero of the day was BPM’s Stefano Luongo who scored 7 goals as his team earned a crucial victory against Mladost.

The ‘Tour de Recco’ visited Turin on Day 10 – they played in Bologna in the previous two rounds – and the Italian side offered a fine performance for the locals. Though Barceloneta came up with a much better performance than in the previous rounds, the home defense was outstanding, Marko Bijac produced a series of brilliant saves to keep the Spaniards on 3 goals. In fact, Barceloneta remained scoreless in the last 13:32 minutes and even though they held Recco on 8 goals – the fewest in ten rounds –, this didn’t earn them any points.

Brescia also ran out of ideas in offense in Moscow and couldn’t score in the last 15:03 minutes. Early in the third, they led 5-6 but after that, it was Dynamo all the way, the Russians staged a 5-0 rush including three magnificent goals from Gavril Subotic to upset the second-seeded Italians. It also meant an end to Recco’s 8- game winning streak.

These two results favored Ferencvaros which had already done its job on Friday by beating fellow Hungarian side Eger. It was no surprise, FTC leads 6-0 in the two teams’ head-to-head this season and with this win, the Super Cup-winners closed the gap on Brescia and Barceloneta. They can even set their eyes on the second place – that’s going to be decided in the next two rounds when they travel to Barcelona and play with Recco at home. At the same time, this loss has almost surely put Eger out of the contest for the F8 berths, so after four consecutive appearances, they will miss the cut this time.

In the fourth game in this group, Steaua didn’t leave the points in Belgrade, while Zvezda is yet to gain a point in the prelims.

The big game in Group B well could be decisive in the hunt for the last available berth (Hannover qualifies automatically as host) – so the hard-fought win of Olympiacos might mean much more than three points. It was a tremendous battle between the champions of the last two editions. Szolnok staged an almost perfect first half while going 2-5 up but towards the end of the second period Olympiacos started to convert its man-ups (they began with 0 for 5) while Szolnok missed some crucial ones so it stood 4-5 at halftime.

Szolnok took the lead three times in the third but Olympiacos always had the answers, what’s more, Alexandros Gounas just beat the buzzer to give them a 9-8 lead before the last break. It was a huge fight in the fourth, the visitors equalized but Andro Buslje’s double decided the outcome. Though Szolnok pulled one back and had the last possession to go even a block saved the Greek goal and might end Szolnok’s march towards a 5th straight appearance in the finals.

Since later BPM managed to add three more points to its tally by overcoming Mladost, the Italians now enjoy a 7-point lead ahead of Szolnok. It wasn’t an easy ride in Busto, Mladost held on for quite a while, trailed 10-9 before the last break but while BPM netted both its man-ups in the fourth, the Croats were 0 for 4 in the decisive phase. Captain Stefano Luongo was on fire, he scored 7 of his team’s 10 goals in the first three .

Group leader Jug enjoyed an easy cruise against Hannover while setting a scoring record in Group B with 18 goals (Recco holds the season’s record with 19, against Steaua). Jadran took revenge on Spandau for its Berlin defeat, the Croats’ offense worked well and a 4-0 last period turned their victory into a thrashing.