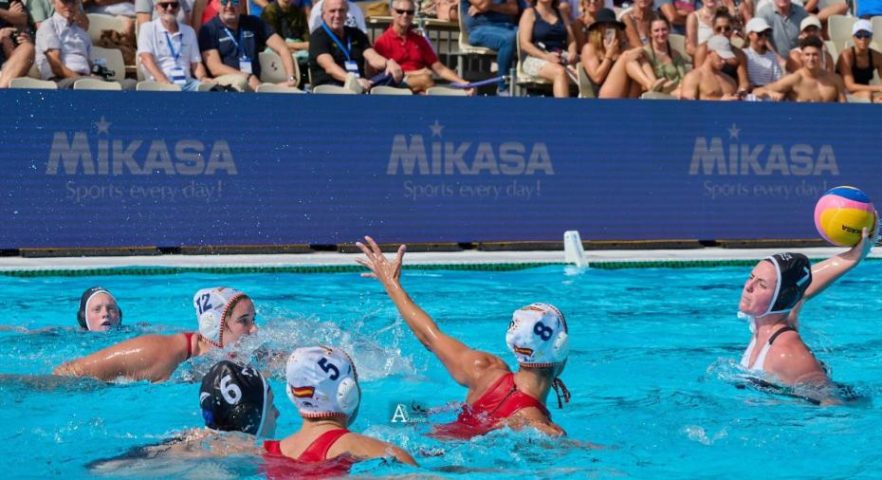 The Setterosa might be surprised at the way that they could penetrate through Canada’s defence this afternoon. A mix of some classy attacking play from the Italians and some ghastly defending in the third quarter from the Maples handed Carlo Silipo’s side a 16-9 victory.

In the second game of the day, Spain had no trouble against New Zealand, with all but one player on Miki Oca’s roster adding goals to their tally in a 21-4 rout. The Kiwis started well, but couldn’t keep pace in the second half. Spain will have enjoyed a slightly-more straight forward game ahead of tomorrow’s clash with Hungary.

You can read the earlier reports of the United States 6-9 Netherlands, and the Australia 7-9 Hungary contests here

Although the game was well poised after sixteen minutes, some slick finishing from the Italians guaranteed what was eventually a comfortable victory.

Both teams sat in a zone for most of the game, allowing plenty of shots on goal, but facing the in-form Sofia Giustini (2), Silvia Avegno (2) and Claudia Marletta (3),  the Maple Leafs were simply outgunned by Italy.

Canada was competitive and carried a goal-scoring threat for a half, but David Paradelo will be concerned that his side was unable to stop shipping goals today in that disastrous third quarter; they will need to tighten up their defence against the Americans tomorrow, or we could see more of the same.

Italy can progress from Group A, and guarantee a spot in the semi-finals with a victory against the Netherlands tomorrow.

The game’s opening eight minutes were played at a frantic pace, with both teams looking dangerous when they had the ball in their attacking thirds. Both keepers, Jess Gaudreault and Caterina Banchelli, made some excellent saves, with the Maples’ keeper even keeping out a Roberta Bianconi 5m penalty.

The Italians took a narrow 3-2 lead into the second thanks to no-look scores from Roberta Bianconi (on the perimeter), the masked Sofia Giustini (on the right wing), and a Lucrezia Cergol shot that Shae La Roche deflected past her own keeper. But it was La Roche and Axelle Crevier who both netted classy shots from the left side for Canada. 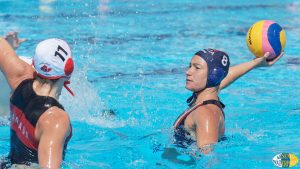 Silvia Avegno and Domitilla Picozzi netted early in the second period to give Carlo Silipo’s side a bit of a buffer, but Canada got back into the game via two players that the Italians know well: Hayley McKelvey, who over the summer signed for Italian side Plebiscito Padova, made it 5-3 with a tasty shot after a long swim with the ball, before Shae La Roche, formerly of SIS Roma, powered home a shot from range.

The Setterosa restored their three-goal advantage with scores in transition by Giulia Viacava and Agnese Cocchiere, but Olympiacos’s left-hander, Kyra Christmas, made sure her team stayed tightly in the contest at halftime (7-5) with a beautifully placed shot past Banchelli.

However, things changed drastically in the third quarter. Italy began to control proceedings in the second half with excellent perimeter shots by Domitilla Picozzi and Silvia Avegno, giving Jess Gaudreault no chance in the Canadian goal. A well-orchestrated set-move from a Carlo Silipo time-out gave Italy’s number ten the chance to make it ten, and she did so with supreme confidence (10-6). 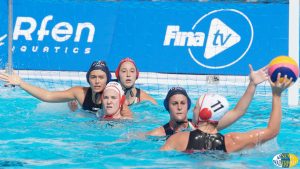 Towards the end of the third period, it was one-way traffic, with the Setterosa carving open the Canadian defence like a knife through butter. Slick shooting from Sofia Giustini, Roberta Bianconi, and Dafne Bettini put Italy practically out of sight.

Canada mounted a small comeback in the last with Emma Wright and Hayley McKelvey hitting the target. But a clever set-piece by the Setterosa gave Chiara Tabani an easy goal on the post, before Marletta scored twice; from a 5m penalty and from a 7m looping shot to cap off the Italians’ convincing victory.

Spain eased their way to victory in the last game of the day with a 21-4 win against a spirited New Zealand outfit.

The European Champions never looked like they would have too much trouble getting past the Kiwi’s, and the gulf between the two teams was fairly reflected in the match.

Bea Ortiz bagged a quad, while Judith Forca and Paula Camus both netted three times during the course of the four quarters.

Considering the quality of opponents that Angie Winstanley-Smith’s side faced, they defended impressively, not giving Spain a free-hit in front of goal. The Silver Ferns also attacked creatively and with confidence, but they couldn’t keep that level of consistency against one of the top teams in women’s water polo.

Spain have a tougher assignment tomorrow against Hungary, while the Kiwis are looking to cause an upset against their ‘local’ rivals, Australia.

Spain began as expected on the offensive; Irene Gonzalez put away an early lob, while Maica Garcia converted in a typically emphatic manner from the centre. Gabrielle Milicich did well to catch Martina Terre off guard to open the scoring for the Kiwis, but a breakaway score from Elena Ruiz and a shot above the New Zealand goalkeeper’s head from Judith Forca gave Spain a 4-1 advantage after eight minutes. 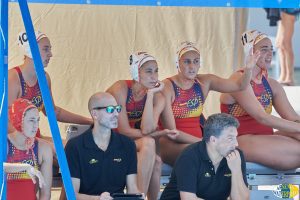 Miki Oca’s side faltered into the second period, and it was New Zealand who found the net first via a good bit of movement from Gabriella Milicich off the post to pull her side within two goals. Jessica Milicich added to Spanish frustrations with a string of outstanding saves, and she nearly prevented Pili Pena’s shot from the right side. With three seconds until halftime, Ortiz powered a 6m shot home to give her team a 6-2 lead.

Spain started to flex their muscles in the third period, and four unanswered goals (Perez, Ortiz, Ruiz, and Pena) took Miki Oca’s team to double digits. Nineteen-year-old Maria Palacio was then at the double; she saw her first shot ricochet off the post before hitting the back of the net, before her second, a delicate lob to the far post, floated past Jessica Milicich. 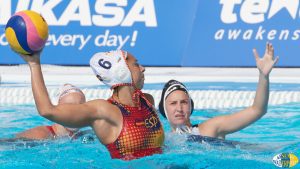 Trailing by ten strikes going into the last quarter (13-3), with the game obviously over as a contest, New Zealand continued to press on. Emily Nicholson, now an Island native playing for Tenerife Echeyde, scored an excellent goal from the centre-forward position.

But the day belonged to the Spanish, and Bea Ortiz added a third in the match, while Paula Camus and Judith Forca also competed their hat-tricks