PODCAST: Eleftheria Plevritou – “When it comes to playing with my sisters, I get angry a lot easier!” 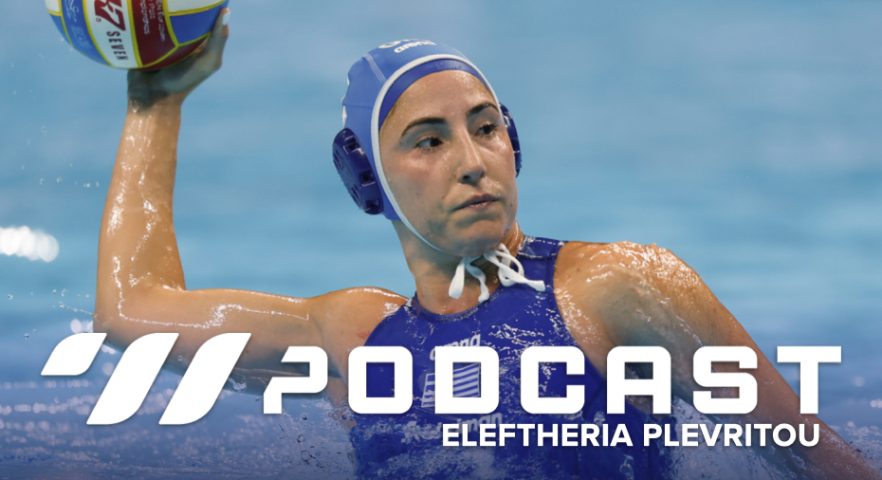 To kick off the new season of the Total Waterpolo Podcast, we are this week joined by a central figure of the Greek women’s national team, Eleftheria Plevritou.

To start the show off, the Most Valuable Player of the women’s tournament in Split conceded that losing to Spain in the final of the European Championships was painful, but Eleftheria says that the overall experience was positive:

“To be honest, we knew from the beginning when the Europeans started that we weren’t the team that is one of the favourites for the medals but sometimes you need to first believe in yourself and then all the others will do it. We felt really sad, of course, when we lost the gold because we knew that we could beat Spain. But in the end Spain was better on that day so they deserved it and when the days passed the good feeling stayed stronger to us because the silver medal is a really huge achievement for this team and is the beginning of a really bright future. So only the happy parts of the team remained after that, and we were happy because this summer was extremely difficult.”

Plevritou, 25, believes that the current composition of the Greek national team is well-balanced and in a strong position to qualify for the upcoming Olympic Games in Paris, for which Greece must still qualify:

“I think that at this moment our team has the best combination of a really good experience. All players are 27 and younger. So at this moment we have a team that is full of talent. We have experience and a team that is fresh. So this combination I think it’s the key for the future, and it will be bright. We will try to work hard and continue to be in the medals, but our biggest aim is the Olympics in Paris.”

On the podcast, we discuss the dynamic between Eleftheria and her two sisters, Margarita and Vasiliki. While they all enjoy the sport, Eleftheria reveals that she and her sisters never discuss water polo away from the pool:

“We were always close from very young ages. We had a lot of hours of training, and when we were home resting or especially during summer vacation, we never talked about water polo, we tried not to deal with water polo. During the season during the whole year we have a lot of games and a lot of hours of training. We are tired from the training, so when we are out of the pool, we try not to speak about it. Summer vacation is the only time of the year that we have a few days off from the swimming pool. So It’s really important not to speak about it, we try not to do that.”

During the Podcast, however, Plevritou admits that her sisters frustrate her more than her other club and national teammates:

The Greek star is appreciative of the support she and her Olympiacos teammates receive from their home fans in Athens, but she believes that the majority of players do not receive the credit or recognition they merit:

“First of all I will say that it’s really bad for our sport that is not so famous in Greece. Also if you see in Spain, they have the gold and we have the silver (from Split), and yet most of the journalists deal with basketball.  Everybody knows that Olympiacos has amazing fans. For us, it’s really good that we have our fans, they help us to play better. If the pool was empty, It will be like nobody cares. But for our sport in general it is really bad that it is not as famous as it should be in my opinion.”

Last but not least, Eleftheria admits that she follows the progress of other European teams and keeps tabs on a few champions league opponents:

“We always keep an eye on the other teams, but it’s a new season. Of course we have the target to win the champions league again, but there are always really good teams that try to beat each other. So for me, a really strong team and even stronger than last year is Sabadell, and after that I think Mataro and Ferencvaros. There is also SIS and Padova, but I think they’re a bit at a lower level. But of course we still have a lot of games to play.”

Eleftheria also discusses the Greek League, her relationship with her sisters, and her coach, Alexia Kammenou. In Part 1, we play “Which Plevritou Are You?” in which Eleftheria reveals a great deal about her and her sisters that we did not know, while Part 2, as usual, consists of questions you have sent in via social media.

Listen to our episode with Eleftheria now! All the episodes of the Total Waterpolo Podcast are available on all major Podcast streaming services, such as Spotify, Apple Podcasts and YouTube.
Don’t forget to head over to www.wearwaterpolo.com and use our discount code ‘PODCAST10’ for 10% off your next order