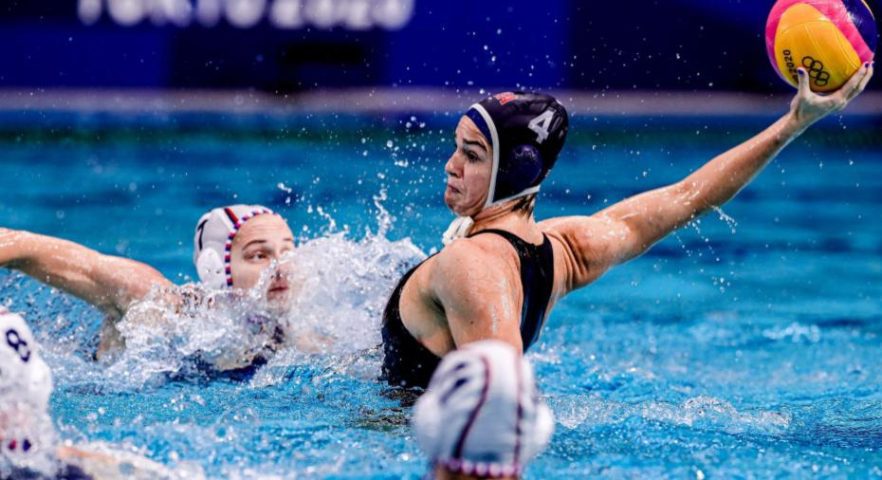 Yesterday evening, we saw a new-look United States team narrowly defeat the Netherlands 12-11 in Utrecht. The game was characterised by the inclusion of fresh faces for both teams, something that we will certainly see a lot more of from Team USA at the World League Super Finals in Tenerife next week.

In what has appeared to be a never-ending cycle of international tournaments or preparation for tournaments over the last year or so, it appears that all of the top European nations are now quite familiar with each other. However, since the United States won its seventh world championship title in July this year, they have, for the time being, stayed under the radar, giving Adam Krikorian a chance to blood-in some younger talent.

Nevertheless, the United States squad for Tenerife still boasts a few individuals who can now be considered veterans, including one of the best utility players of the past decade, Rachel Fattal. The 28-year-old tells us the team has been plugging away in preparation for the World League Super Finals in Tenerife.

“A lot of our team are in different places right now, so we’ve been able to get together for a few training camps to work on our connections and growth as a team. Our focus is always on development and teamwork, and, of course, having fun”

In recent years, the United States national team has been extremely dominant in this tournament, winning the last seven competitions, with Fattal participating in the last six. However, according to Fattal, her team are not just greedily eyeing up what would be a thirty-third gold medal in twenty years:

“Of course we would love to win, but our biggest goal is always to improve throughout the tournament, individually as well as as a team. It’s also a great opportunity to get more games against other teams that we don’t often get a chance to play. And if you know us, we want to enjoy every game and opportunity we get to play together!”

This tournament for Team USA is characterised by a changing of the guard, in the same way that we saw at the Intercontinental Cup earlier this year. Maggie Steffens, Maddie Musselman, Kaleigh Gilchrist, and Stef Haralabidis are all absent from the squad; if the United States is to win gold in Tenerife, they will need to do so without some of their heavyweights. At this stage, it is unclear in what capacity these players will return to the squad, but a USAWP press released indicated they would. In any case though, Fattal proposes that it might be time to think about a future beyond those players and the next generation:

“They are all amazing players and have obviously been a part of this team for the last however many years and our team’s success. But without them here, it gives our younger players opportunities to step up and gain experience playing at this level, as well as a competitive environment to learn and grow. Every opportunity for competition is important for our team and us as players. It gives this team a chance not just to play high-level games together but to also get to know each other. Each opportunity we get helps with our team’s development for the future. “

There are nine returning players from the roster proper in Budapest, but there are four relatively new players to the national team. Some will remember Jewel Roemer from Gwangju in 2019 and as a reserve for Budapest, while followers of the Spanish league will know Sant Andreu’s Hannah Shabb. The two youngest additions, Ella Woodhead and Jenna Flynn, were outstanding with the junior age groups over the summer. Fattal is looking forward to seeing how the newbies will fit into the most successful women’s national team of all time:

“With new players always comes new styles of play; this allows for the drive to learn and grow and develop. They each bring a unique quality and strength to our team, which will help round out our team and elevate our play as a whole. I think the biggest thing is for each of them to draw confidence from their backgrounds and experience and use that in their play. “

With this squad going through a process of transition, the two-time Olympic gold medalist is one of a few really experienced and senior players in this group. Fattal does not believe that her team’s success will involve an over-reliance on her, but she is looking forward to being a leader in the team :

“We consider everyone on our team to be a leader in their own way, so I always find it a privilege to step up into a bigger leadership role with this team. This tournament is a great opportunity to lead by example. “