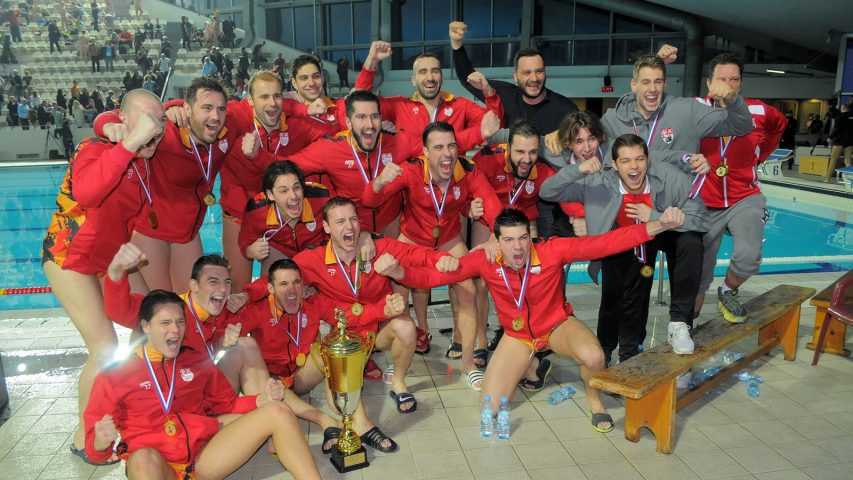 Radnicki defeated Novi Beograd 11:9 in the final, played in Belgrade this evening, and won its third national cup in the club’s history. The Kragujevac-based team won Cups in 2015 and 2020, while it lost to Crvena Zvezda in the final last year.

Both clubs have great players on their roster, so nobody was an underdog. However, a dream team of Novi Beograd, which played in the final of the Serbian Cup for the first time, was a favorite. Therefore, this outcome can be considered a surprise.

The middle two quarters were crucial for Radnicki’s win. Novi Beograd scored only two goals in the second and the third periods. The Kragujevac-based side made a great comeback during these 16 minutes.

It was a fierce battle with more than 40 exclusions (20 personal fouls for Novi Beograd and 23 for Radnicki).

Novi Beograd needed less than three minutes to build a 3:0 lead. After three early goals, Radnicki consolidated its defense, but it didn’t find the way to score the goal – until the 7th minute when Cuk converted a man-up for 1:3. Shortly after, Radulovic added an action goal, and Radnicki was back in the game. Still, Strahinja Rasovic closed the first period with a fine action goal for 4:2.
Radnicki’s captain Filip Jankovicscored from a penalty for 3:4. After that, both teams had a lot of troubles in the attack, they missed a lot of nice chances. Dusan Mandic netted for 5:3 (13th minute)

Still, Radnicki took control, and equalized in the 15th minute – Jankovic converted a 6 on 4 for 5:5. Just 12 seconds before the middle break, Radulovic put Radnicki in front for the first time (6:5).

The Serbian champion continued to dictate the pace after the middle break. Nikola Lukic scored from a counter-attack for 7:5. Novi Beograd made more nice opportunities to score in this period, but Radnicki’s goalkeeper Lazar Dobozanov was outstanding this evening. Two minutes and 27 seconds before the last break, Dusan Mandic ended Novi Beograd’s goalless phase that lasted more than eight minutes (6:7). But, with two goals in the last 62 seconds of this quarter (Radulovic and Ukropina), Radnicki earned a huge 9:6 advantage before the final period.

Novi Beograd entered the fourth quarter without two key players – Dusan Mandic and Dusko Pijetlovic. Each was excluded because of the third personal foul at the finish of the third quarter. On the other side, Nikola Lukic finished the match before the last break.

Gojko Pijetlovic boosted Novi Beograd’s self-confidence with a couple of nice saves at the beginning of the fourth period, and the Belgrade-based side came very close to Radnicki. In the 30th minute, Strahinja Rasovic found the net from the deep left for 8:9. But, Radnicki replied with two goals. Jankovic doubled its advantage with a man-up (10:8). Josip Vrlic made it 11:8 with 65 seconds left on the clock, and that was the end of the contest. Nikola Jaksic set the final score in the dying seconds.

After the match, Lazar Dobozanov, one of the heroes of the victory, commented:

It was a really hard match. Novi Beograd started excellently. Still, we were able to come back, thanks to a good defensive play. Each of us did the best he could today. A great team effort led us to this big win over Novi Beograd.

“Congratulations to Radnicki. This game was very similar to our match against Partizan yesterday. We started well, but we stopped in the second and the third quarter. We didn’t display the potential we have, and let Radnicki dictate the pace. We missed too many opportunities with a power player advantage and that was crucial.

Before the encounter between Novi Beograd and Radnicki, the final of the Serbian Cup for ladies was played.