Russia blows out Germany; important victories for Georgia and the Netherlands

Several important games have been played on Day 3 of the Olympic Qualifications in Rotterdam.

Georgia defeated Canada in Group A (14:11) and collected the important three points in a battle for the quarterfinals. Montenegro made no mistake and convincingly beat Brazil.

In the first today’s match in Group B, Russia completely outplayed Germany – 17:5. After the third loss, it is almost certain that the Germans’ dreams of the Tokyo Olympics are over. Only a miracle can save them. The Netherlands defeated Romania in a real thriller (9:8) with a last-gasp goal. Romania doesn’t have big chances to reach the quarterfinals now, while the Dutch team, which has earned four points so far, is on the right track.

As expected, Croatia closed the day by defeating France. But it wasn’t an easy win. After the third round, Croatia and Russia mathematically secured themselves spots in the quarterfinals.

Montenegro wasn’t so convincing as yesterday against Canada (21:7), but it achieved another easy win. Montenegro had an opening 3:0 lead. The Brazilians came close (2:3) early in the second quarter, but Montenegro responded with a new 3:0 series for 6:2. At halftime, Montenegro led 9:4. The last goal by the South Americans came in the 18th minute (5:10). In the remaining 14 minutes, they didn’t even have many chances to score, they ran out of gas, and Montenegro cruised to a win.

The Montenegrins climbed into 1st place of the group, but their toughest test in the preliminary stage is yet to come. Montenegro and Greece will face off tomorrow, and that match will probably decide which team will finish 1st and get the easier route through the knock-out round.

A month ago, Greece and Montenegro played each other in the final of the European World League Qualification Tournament in Debrecen. The Greeks recorded a convincing win (12:7).

Georgia defeated Canada and made a giant step toward the quarterfinals. The Georgians almost made a big upset on Day 1 (they lost to Greece by just a goal). Today, they played another good game. If they keep this rhythm and defeat Brazil tomorrow, the Georgians will probably secure 3rd place in the group.

The winner was decided in the middle of the game. Georgia, playing well in defense, won the first quarter 3:1 and added one more goal for 4:1 early in the second quarter. Canada reduced to gap twice (2:4, 3:5). The Canadians’ third goal came 22 seconds before the middle break, and it seemed that 3:5 would be a score at halftime. But, Georgia’s Marko Jelaca beat the buzzer. He sent the ball into the net from 6 on 5 in the last second of the first half for 6:3. Georgia opened the third period with two goals (Baraldi and Jelaca) for 8:3 and that proved crucial for the outcome. Canada was trying to come back, but from that point on, the distance between the sides was never smaller than three goals. Mark D’Souza led the Canadians with 5 goals, but that wasn’t enough. He scored his last goal 19 seconds before the end, and it was confirmed after the VAR review.

Irakli Razmadzi, Georgia’s goalkeeper, was voted the MVP of the match. He conceded 11 goals, but also collected 12 saves, some of them in crucial moments.

Before the tournament, many expected that the game Russia-Germany would be a derby match. But, today’s game turned into a one-sided contest quickly after the beginning.

The Germans started in the same way as in the matches against the Netherlands and France – very badly. Russia built a 5:0 lead after less than seven minutes. On the other side, the German players again needed a lot of time to found their rhythm. Against the Netherlands and France, they managed to come back. Germany was even leading against France for a while. But, today, Russia’s lead was never in danger. The Germans’ comeback lasted shortly. Russia had a 6:1 advantage in the early stage of the second period. Germany scored two consecutive goals by the middle break for 3:6. Still, after the mid-break, Russia dictated the pace, played patiently, and increased its advantage step-by-step. The Russians went up 13:3 before Germany’s first goal in the second half (Stamm for 4:13 in the 27th minute).

Daniil Merkulov was a nightmare for Germany’s defense, he scored six goals.

Russia secured a spot in the quarterfinals. The Russians don’t have big expectations before the 4th day because they will play against Croatia tomorrow. Still, they have realistic chances to finish 2nd in the group. On the last day, they will meet the Netherlads.

The Netherlands made a lot of good opportunities to score in the first quarter, but Romania’s goalkeeper Marius-Florin Tic was outstanding, he posted seven saves in the first eight minutes. Still, the hosts had a slim 2:1 lead before the second period. Tic kept his momentum in the second quarter, while his teammates started playing better and better in the offense. Romania scored three unanswered goals, and they turned around a 1:2 deficit into a 4:2 lead. However, the Dutch caught up with the rival by the end of this quarter.

In the middle of the third period, Robin Lindhout put the Netherlands in front (5:4). Shortly after, the hosts had an excellent chance for 6:4. They earned a penalty shot, but Tic saved a shot from Jansen. In the next possession, Dragomirescu equalized, but Muller gave the Dutch a new lead. Romania forced a penalty 25 seconds before the last break. Vlad Georgescu made no mistake from the 5m line, and the rivals entered the final quarter tied (6:6).

Midway through the 4th quarter, Romania went in front (Georgescu for 7:6), Koopman leveled the score, and the drama was reaching its culmination. Three and a half minutes before the end, the Netherlands was awarded another penalty because Romania’s Vatrai didn’t leave the field immediately after the exclusion. But, Tic came out with another great save (this time he blocked Lidnhout’s shot). Romania took a lead once more (8:7) with 01:42 remaining on the clock. Thirty seconds later, Van Ijperen found the net for 8:8.

Although Marius Tic finished the match with a total of 19 saves, he didn’t save a point for his team. Just four seconds before the end, Jesse Koopman converted a man-up for the final score. In the remaining time, Romania had a 7 on 6 (Tic joined the teammates in the attack), but there was no goal, and the hosts recorded a valuable victory.

Croatia continued its winning streak, but the Croats needed a lot of time to break the persistent French team. France kept up with the big favorite until the middle of the third quarter.

France started very well. In the 4th minute, the French led 2:0. But, the Croats scored three goals in a row by the end of the first period. Still, France didn’t surrender easily. David Babic opened the second period with a goal for 3:3. Croatia gained a 4:3 lead. But Thomas Vernoux scored two man-up goals in a span of 50 seconds to give France an advantage (5:4) in the 14th minute. Croatia’s captain Andro Buslje closed the first half by scoring from a power-play advantage – 5:5.

Croatia, finally, started breaking the opponent in the middle of the third quarter. In the 19th minute, the score was 6:6. Then, Croatia produced a 4:0 rush and jumped to a 10:6 lead. But, France kept fighting and didn’t let the Croats relax. Bouet hit the back of the net in the last second of this period for 7:10.

The French came even closer in the fourth period (9:11 and 10:12). But, they failed to score in the last four minutes. Three and a half minutes before the final buzzer Luka Bukic converted a penalty to the final score – 13:10.

This result is an encouragement for the French for the upcoming game against the Netherlands. The Croats realized what aspects of the game they have to improve. 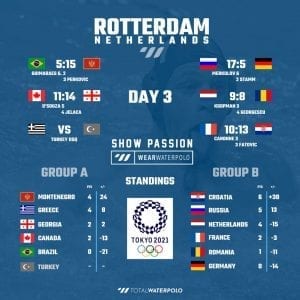