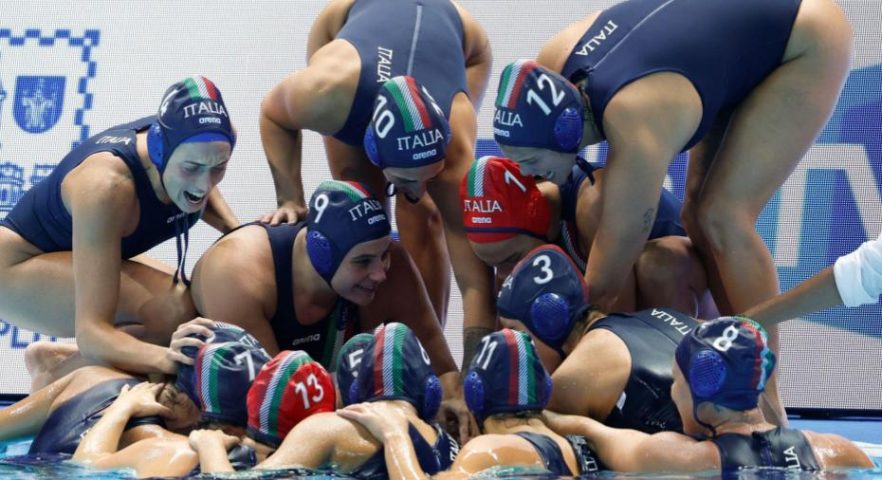 Italy have won bronze at the European Championships with a dramatic late victory against the Netherlands – coming from two goals down at the beginning of the last quarter and scoring three goals in the last ninety seconds.

Roberta Bianconi perhaps had her best game for Italy in her career, scoring five amazing goals at important moments in the match. Sofia Giustini was also in incredible form, as she has been for the entire tournament, with four more goals tonight.

The game was a hugely entertaining affair, with a large number of supporters from both nations making the journey to the Dalmatian coast. The match had genuine tension and intensity, characterised by fierce physicality from both teams.

Both teams took the lead several times, but it was a masterful display of gamesmanship in the last that saw Italy overcome the Dutch – taking revenge for their defeat in the bronze medal match at the World Championships in Budapest.

The game started frantically, with both teams practically scoring with every attack they took in the opening quarter. Silvia Avegno gave Italy the lead when her shot snuck under Laura Aarts’ arm.

Simone Van de Kraats responded quickly by scoring on Caterina Banchelli, but some sloppy defending gave Italy the lead once more when Domitilla Picozzi latched onto a loose ball on 3m to fire home for 2-1.

Maartje Keuning and Brigitte Sleeking combined for the Netherlands’ second equaliser, only for Mataro’s Silvia Avegno to grab her second of the match when Laura Aarts was found wandering away from her goal; the Italian number four spotted Aarts rushing out to the centre, and placed her shot simply into the middle of an empty Dutch goal.

For the third time in the match, though, the Oranges found a way back into the contest, and it was some sublime attacking play by Vivianne Sevenich, who fired her back-shot spectacularly past Banchelli from the right wing. But no sooner had Sevenich celebrated than Ekipe Orizzonte’s Valeria Palmieri matched the Dutch centre’s back shot with one of her own, to make it 4-3. 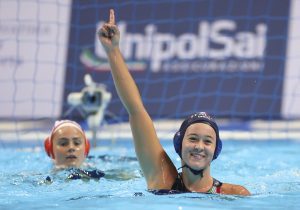 Evangelos Doudesis’s side equalised once more via another backshot—this time from his other centre-forward, Kitty Joustra. But Sofia Giustini, one of Italy’s best players at this championship, ensured the “Setterosa” had a one-goal lead going into the second quarter.

Italy punished the Netherlands early in the second with some ruthlessly clinical finishing. The Setterosa built a two-goal lead for the first time thanks to a tasty shot from Roberta Bianconi past the Netherlands’ substitute keeper, Britt Dobbelstein.

Simone Van de Kraats got one back for the Dutch, but Roberta Bianconi scored a goal that was an exact copy of her first to make it. Before long, Italy was ahead by three scores, with Domitilla Picozzi’s second goal of the game hitting the post before falling into the Dutch goal (5-8). 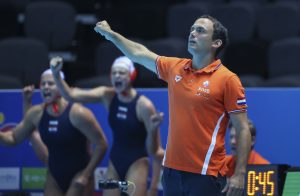 The Netherlands looked like they were on the ropes, but found a way to overturn a three-goal deficit. They found their first goal via seventeen-year-old Lola Moolhuizjen, who found the far side of Banchelli’s goal. Then, with less than a minute remaining in the first half, Simone Van de Kraats scored her hat-trick to reclaim the lead for the Dutch, before Sabrina Van der Sloot levelled the game at 8-8 at the break.

Both teams scored with their first attacks in the third. Sofia Giustini added her second of the game on the left, before Van de Kraats, once more, powered the ball home from the right side.

The Dutch then took the lead for the first time in the match (10-9), with Olympiacos’ Brigitte Sleeking having too much time to measure a marvelous bouncing shot.

After two lengthy stoppages in the match due to some confusion amongst the referees and officials, Giulia Viacava leveled the game up when she found herself unmarked by Simone Van de Kraats, and fired well past the returning keeper, Laura Aarts. 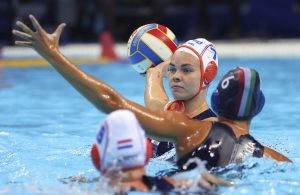 But the Dutch were back in front almost immediately, and it was Brigitte Sleeking, after some intense faking, who scored her second goal of the game and her team’s eleventh, and just before then end of the third, they had a crucial two-goal lead (12-10), courtesy of Maartje Keuning.

Having led by three goals in the second period, the Setterosa head into the final period two goals down; they needed a goal desperately to keep their medal hopes alive, and they scored two to level the game up – firstly from a third, beautiful long-shot from Bianconi before Sofia Giustini made no mistake when she found herself one on one with Aarts on the breakaway. 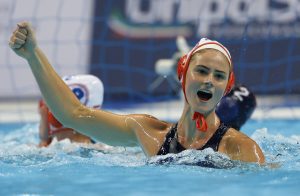 Then, quite amazingly, Roberta Bianconi scored her fourth goal of the match; another absolute peach from a distance. With four minutes to go, the Dutch were behind once more, but Kitty Joustra finished off a really well-improvised flick from close range to tie the game at 13-13.

The Italians regained the lead with 90 seconds remaining in the game. Domitilla Picozzi scored the game-winning goal to give Setterosa the lead they would need to defend in the championship game. Carlo Silipo was sent off after arguing with the officials, which only added to the drama.

And to make things even more exciting, Sofia Giustini missed the penalty, but it had to be taken again. Simone Van de Kraats was found to have interfered with the penalty taker, so she was sent off for the rest of the game. The penalty was retaken, and who else but thirty-three-year-old Roberta Bianconi could tuck the penalty home to put the score at 15-13.

With seventeen seconds in the game, Sofia Giustini scored the sixteenth goal for Italy, with Laura Aarts out of her goal, to round off a wonderful game of water polo.