Serbia and Romania struggle, but go to 9th-place match after penalty dramas 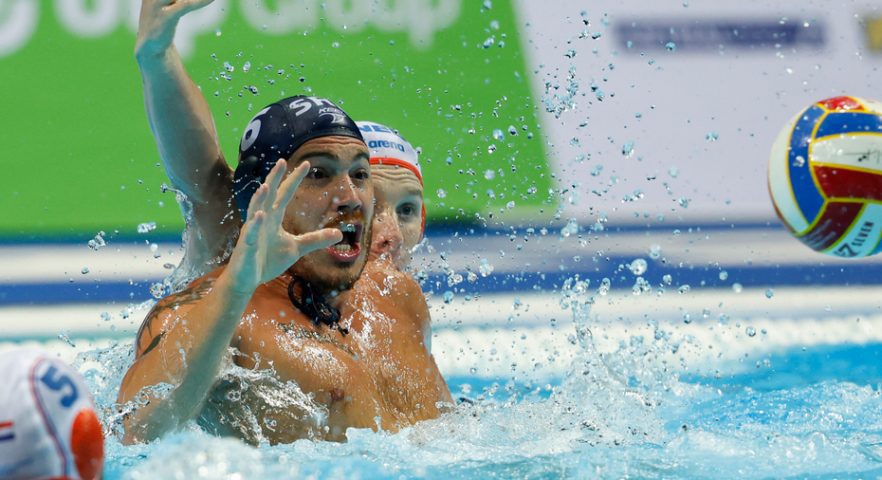 Serbia and Romania will play in the 9th-place match at the European Championships in Split.

Both teams were favorites in today’s semifinals in the classification 9th-12th. Still, neither the Serbs nor the Romanians recorded an easy win.

Romania, which caused headaches to some favorites in the previous several days.Still, the Romanians found it hard to secure a spot in the 9th-place match.

Israel started better. The debutants at the Europeans had a 4:2 lead in the middle of the second period. Romania managed to turn around a 2-goal deficit to a 5:4 advantage early in the third period. The Romanians had a 6:5, too. Still, the sides were tied at 6:6 before the final quarter. The game followed the same pattern in the fourth period. Romania took a 1-goal lead twice (7:6 and 8:7), but Israel leveled on both occasions. The last equalizer came with 49 seconds to go when Goldschmidt converted a penalty for 8:8. The Romanians had the last attack and a chance to secure a win before a penalty drama. However, Neamtu hit the crossbar, and the game was prolonged with the penalty shootout. 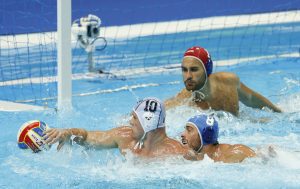 Both teams had quite a poor percentage of shots during the game. For instance, Romania’s percentage of action shots was 2/19, and Israel’s 4/19. But, both goalkeepers deserved credit. Israel’s Fire posted 15, and Romania’s Tic 12 saves in regular time.

The series of misses continued in the shootout. The first one who failed to score was Israel’s Gros. Tic saved his shot in the 2nd round, and Romania earned a 2:1 lead. In the third round of shots, Goldschmidt missed, while Fire saved a shot from Antipa. Neither of the teams scored in the 4th round. Haimovich almost dropped the ball, but he managed to shoot. However, the ball went far away from the goal. At the other end of the pool, Fulea dropped the ball and didn’t even shoot. Israel’s goalkeeper, Fire, broke that row of misses. He made 10:10 scoring in the 5th series, but Romania’s Neamtu sent the ball into the net, too and Romania won 11:10. 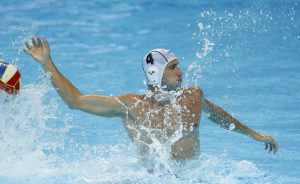 Bogdan Rath, the head coach  of Romania, said that his team had expected a tight game:

“After the group phase, I kept telling to the players that we would play against Israel and that is going to be a very hard match. I tried to prepare them mentally, because it’s very important and I say that as a former player. Israel is a good team. During this match we were performing totally on the same level. I think we won this match because we had better mental preparation than that opponent. I would like to congratulate my players.

“This match was very hard for us. The players  did everything for the success, but today it was not enough. The next edition of the European Championships will be in Israel, in Tel Aviv, so I think we are on a really good way to promote water polo. We need to play more and more matches to be better, to improve ourselves.”

The Split tournament is one of the milestones of Serbian water polo history. Before the 35th European Championships, Serbia never failed to reach at least the quarterfinals of the continental championships.
There are many reasons because the Serbs didn’t show what was expected of them (a rejuvenation after the Olympic Games, troubles with injuries and illnesses before Split, big pressure, a challenging opponent in the crossover round, etc). However, the players disappointed themselves in the first place. There will be a lot of time for analysis until the World Championships in Fukuoka (the Serbs qualified for the WCH as the 5th-placed team at the World Championships in Budapest).

The Serbs aren’t used to playing the classification matches. They struggled today but recorded the win.

Serbia was without Dusan Mandic today. In the previous matches, it was evident that he hadn’t recovered from illness, so he missed today’s game. The Serbs opened the game well. They earned a 2:0 lead. Ognjen Stojanovic stretched the margin to three in the middle of the second quarter (4:1). Immediately after, Winkelhorst reduced the gap, but Serbia had a 3-goal advantage at halftime, since Radomir Drasovic found the net in the 15th minute for 5:2. 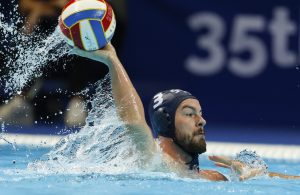 However, after the middle break, the rhythm of the game changed. The Dutch caught up with the Serbs. The main actors of the comeback were former players of Partizan Belgrade, Lucas Gielen and Bilal Gbadamassi. Gielen opened the third quarter with an action goal for 3:5. Gbadamassi made it 4:5, but luck was with him. He scored after a deflection. Gielen leveled at 5:5. 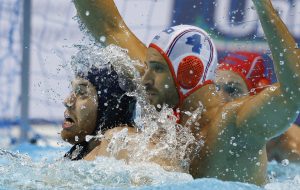 Radomir Drasovic ended Serbia’s long goalless phase. He netted an action goal converting a man-up for 6:5 in the 24th minute. Between his two goals (5:2 and 6:5) eight minutes and 17 seconds passed.
Still, Serbia didn’t have an advantage at the last break, because Koopman converted a 6 on 5 for 6:6. It turned out that it was the last goal in regular time.

Serbia was more aggressive in the attack in the final minutes and made more chances, but the Serbs missed too many. They hit the posts several times in the last eight minutes, they lost the ball, etc. But, the Dutch couldn’t score in the final eight minutes. They were looking for their opportunities mostly from counter attacks. However, there were no goals in the final period. In the last minute, defenses worked well. Both teams lost the ball in front of the opponent’s goal – first Serbia at 00:40. Then the Netherlands with 20 seconds to go and a penalty shootout decided. 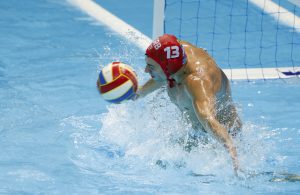 The drama ended after the 7th round when Dobozanov saved a shot from Lucas Gielen, who was one of the best Dutch players in regular time. Both goalkeepers (Dobozanov and Wagenaar posted one save each in the first five rounds).

“The game showed that we hadn’t recovered from a big depression. We played well in the first quarter, but after that, we lost a significant advantage. We didn’t think enough about the Netherlands’ counterattacks. Goalkeepers kept Serbia in the game. In the end, we came to the penalty shootout, in which luck is a crucial factor. Our next opponent, Romania, proved that it had managed to consolidate and compose a solid team in a short period. And on the other side, we are in a situation where we have to be afraid of each opponent

Harry van der Mer, the Dutch coach was disappointed because of the result, but not with his team’s performance.

We had a positive reaction after the game against Georgia when we didn’t play well and were very disappointed after the loss. But, today, we showed a character and that we could play good water polo. We created a lot opportunities from counter attacks. Yes, we missed, that is a pitty, but it was good to see that the spirit in the team was still there. In the end, we went to the penalty shootout, which are a lottery. But, it is good for us to have games like this., with an ending like this. It was a good experience how we managed to keep the concentration until the end.

After a series of bad performances in the group stage, the Germans finished in 13th place, which is their worst ever result in the history of the Europeans. Malta can be satisfied. Before Split, Malta’s biggest success was finishing in 15th place. However, the Malteses weren’t far from a win. After a balanced first quarter, the Germans built a 6:4 lead by halftime. Still, Malta caught up with the more experienced rival in the third period (9:9). Plumpton opened the final quarter with a goal from a counterattack and gave Malta a 10:9 lead. Germany responded with three goals and regained a 2-goal lead (12:10) in the 28th minute. Two minutes before the last break, Malta narrowed the gap from a counterattack (Zammit for 11:12). But, Juengling replied immediately – 13:11. 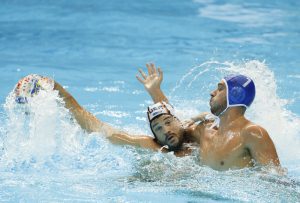 Although this was only a 13-place match, both teams were nervous, and the game had a tense ending. Five players were red-carded because of unsportsmanlike behavior. After Malta’s Matthew Zammit missed a power play shot, a quarrel and pushing between the players started. Still, a big punching was avoided, but five players (three from the German and two from the team of Malta) were excluded. In the last attack, Gansen set the final score.

The encounter between two Slavic countries with similar names was quite interesting in the first quarter. The Slovenians took a 2:1 lead. 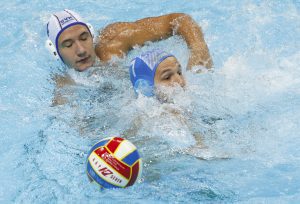 Still, the Slovaks led 3:2 after the first quarter. Slovenia leveled at 3:3. However, shortly after the Slovaks took control. It built a 3-goal advantage (6:3) and maintained the difference until the last break. They dominated in the final period. Samuel Balazs was unstoppable. He found the net six times.