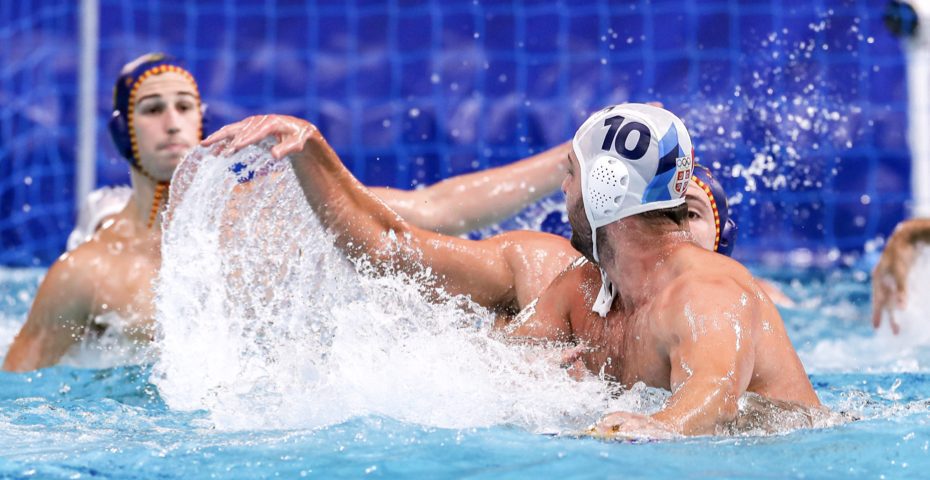 Serbia will play in the Olympic final for the second time in a row.

The Serbs defeated Spain 10:9 in a highly thrilling second semifinal match of the Tokyo tournament and will play against Greece on Sunday in the gold-medal game.

Serbia opened the game well, but the Spaniards earned a 3-goal lead in the third quarter. Still, the reigning champions managed to come back and secured the win with Filip Filipovic’s last-gasp goal.

Serbia ended two Spain’s winning streaks today. Spain arrived at the semifinals with 6 wins in as many matches in Tokyo. The other streak is series of five consecutive Spain’s wins over Serbia at major competitions between the quarterfinals of the 2019 LEN Europa Cup and the first round of the group stage at the Tokyo Olympics (on Day 1, Spain defeated Serbia 13:12). That series also came to an end today.

Team USA edged out Italy (7:6) in the second semifinals for places 5th-8th and advanced to the 5th-place match against Croatia. Reigning World champion Italy and FINA World League winner Montenegro will battle for 7th place.

Reports of the matches Greece – Hungary and Croatia – Montenegro – HERE

The game was an excellent battle between two powerhouses. Both teams played very well and bravely, especially in defense. There were no many mistakes, but it was a tough battle. The match saw even 38 exclusions (19 for Serbia and 19 for Spain). Six players finished the game before the final buzzer because of three personal fouls. Still, Serbs had more energy in the crucial moments.

Spain and Serbia had four chances in the first quarter with a power-play advantage each, but only two of these eight man-ups were converted to goals. After six minutes and 10 seconds of play, Serbia captain Filip Filipovic broke the deadlock. He found a “hole” in Spain’s defense for 1:0. A minute after Andrija Prlainovic converted a man-up after deflection (Perrone tried to block the shot). Spain earned a double man-up in the next possession, but the Serbs defended their goal.

The Spaniards regrouped themselves during the first break, and took control. They scored four goals in a row. Munarriz put Spain on the scoreboard after a counter-attack in the 9th minute and opened the series, which was continued by Bustos, Tahull and Perrone. Spain turned around a 2-goal deficit to a 4:2 lead in less than five minutes. Dusan Mandic converted a double man-up for 3:4. Spain had 6 on 4 in the next attack. But, Branislav Mitrovic saved a shot by Sanahuja. In the last minute, Spain had a new chance with double man-up, and Munarriz converted it to a 5:3. Still, Nikola Jaksic closed the first half with a goal for 4:5. That goal was also scored in a 6 on 4 situation.

Defenses dominated in the third quarter, both goalkeepers posted nice saves. Still, Spain’s Lopez was outstanding in this quarter. The first goal in this period was scored by Granados in the 22nd minute. Shortly after, Mallarach found the net from the right and Spain built a 3-goal lead (7:4). Strahinja Rasovic closed this period with a goal for 5:7. Each of these three goals was scored with a power-play advantage.

Serbia’s defense, commanded by Branislav Mitrovic, was superb in the final eight minutes. Serbia, and thanks to an excellent defensive play, which encouraged the champions in attacks, the reigning champions started climbing back. 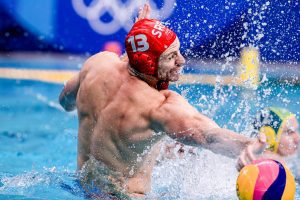 Strahinja Rasovic found the net for 6:7. In the middle of the quarter, Branislav Mitrovic saved a shot by Mallarach, when Serbia was two-man down. But, referee Alexandrescu asked for a VAR. Neither Spain nor Serbia didn’t expect that action had to be reviewed. However, after a video review, Alexandrescu decided that it was a goal. Spain went to 8:6.

Still, the Serbs were able to come back. Mandic replied immediately after that goal as he found the net on extra for 7:8.

In the last three minutes, both teams had “short benches”. In the first five minutes of this quarter, Prlainovic, Pijetlovic, Randjelovic (Serbia), Perrone, Bustos, De Toro (Spain) were sent out because of three personal fouls.

Two minutes and 20 seconds before the end, Stefan Mitrovic fired the ball from the top and, Serbs finally caught up with the rival – 8:8. It was Serbia’s first action goal in the match.

But, just 17 seconds later, Tahull gave Spain a new lead with a power-play advantage, after one of the rare mistakes of Serbia’s defense.

Still, the drama wasn’t over yet.

Dusan Mandic converted a 6 on 5 for 9:9 with 78 seconds remaining on the clock. In the next Spain’s attack, Serbia’s defense was up to the task again and didn’t let the opponent make a good position for a shot. Munarriz tried to score from a distance, but he hit the post.

Filip Filipovic scored a fantastic goal from seven meters from a direct shot after a foul for 10:9. It was just 26 seconds before the final buzzer. Spain coach David Martin called for a timeout after that. But ten seconds from the end, Larumbe made a turnover foul, and that was the end of the thriller. Serbia kept the ball in the last 10 seconds and advanced to the final.

The teams entered the match in different moods. Reigning World champion Italy is really disappointed after a 6:10 loss to Serbia in the quarterfinals, mainly because they were knocked down already in the first half of the match (3:9). On the other side, Team USA wasn’t a medal favorite, but it wasn’t far away from the semis, unlike Italy. The Americans lost to Spain two days ago (8:12), but they were neck-and-neck with the Spaniards until the middle of the fourth period. Their mistakes led them to the defeat in the quarterfinals.

The Americans, who didn’t have so high ambitions as Italy (but they were eyeing the medal), recovered better after the loss in the quarterfinals. Italy didn’t repeat a win over the USA  in the group stage (12:11). Italy “came back from death” in that game. The “Settebello” were three goals down several times, but they celebrated a win. Today, Italy was able to erase a three-goal deficit but not win.

The first quarter was balanced. Italy had a 1:0 and 2:1 lead, but the Americans leveled both times. The USA opened the second quarter with three straight goals. Hooper found the net from a counterattack. After that, Italy wasted two man-ups. In the middle of the quarter, Hooper scored on extra for 4:2. Shortly after, USA’s best scorer in Tokyo, Alex Bowen, scored from a penalty and stretched the margin to three (5:2). 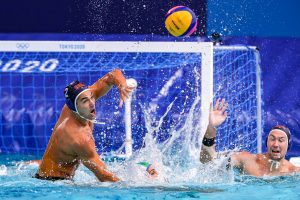 After the USA’s 4:0 series, Figlioli ended Italy’s goalless phase that lasted seven minutes and closed the first half (3:5). Figlioli scored the first goal in the second half (4:5). In the following minutes, defenses dominated, and Renzuto leveled at 5:5 just 30 seconds before the end of the quarter.

Alex Bowen’s “rocket” from 7 meters opened the fourth quarter and put the Americans in front (6:5). It didn’t take a while, and Italy leveled once more. Nicholas Presciutti converted a man-up for 6:6.

Two minutes and 10 seconds before the final buzzer, Italy had a great chance to take the lead. The Europeans forced a penalty shot, but Drew Holland saved a shot from Di Fulvio. The Italians managed to grab the ball after the save, but Renzuto missed. In the next possession, the Americans earned a man-up. After a time-out called by Dejan Udovicic, the USA set up a nice action. Stevenson assisted Johnny Hooper, who found the net from the deep left, with 95 seconds to go. In the remaining time, the USA kept a minimal advantage.