The South American Cup of the U-16 Water Polo began yesterday in Bauru at the ABDA Arena. Bauru hosted the Championship for the selections from Brazil, Argentina, Chile, Uruguay, Peru, and Colombia to play in front of a full arena.

The opening ceremony began in the morning with the communicator Franco Júnior as the presenter. He led the opening of the championship in front of a fully-filled arena.

To end the first day, Brazilian men’s team played against Uruguay and won a score of 23 to 1, with beautiful defenses of goalkeeper Murilo Henrique. 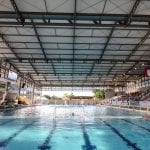 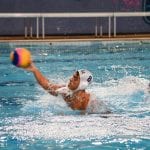 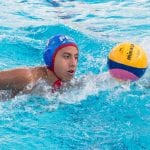 The second day of the Championship was marked by an unexpected cold weather and great play of the Brazilian women’s team.

The day started early, with the clash between Peru and Colombia, ending the match with 16 to 1 for Colombia. Then Argentina and Uruguay met in the pool, the match ending with 14 to 2 for Argentina. The Argentine National Team is standing out alongside the Brazilian team for maintaining its invincibility in these two days of the Championship.

Next, there was the first match of the day for the Brazilian Men’s National Team — they played against Chile. Brazil gave no respite, finishing with the score of 26 to 0, especially thankful for the tactics which did not let the ball leave the Brazilian hands.

In the afternoon, we had the long-awaited premiere of the Brazilian Women’s National Team that played against Chile. The girls put on quite a show and finished the match with a score of 26 to 1, by coincidence with the score almost the same as in the men’s match.

Later, there were games between Peru and Uruguay, and Chile and Argentina, in which Peru and Argentina got the best results. At the end of the day, the Brazilian men’s team returned to the waters of Arena ABDA to face Colombia. The game was fast-paced, resulting in as, what the fans called, “an early end”. Although Colombia made it difficult for them to reach the goal, the Brazilian team managed to take the game very calmly and finished with a score of 16 to 5.