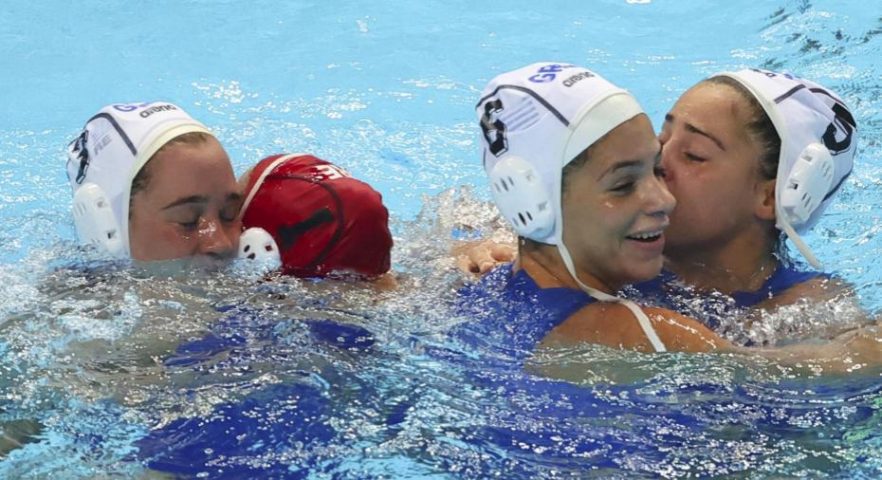 Spain and Greece will contest the gold medal match at the 35th European Championships in Split, after overcoming their opponents with strong defensive displays this evening.

Spain displayed a defensive masterclass this evening against the Dutch, but Miki Oca will be just as satisfied with how his team punished the Netherlands in attack, particularly with an outstanding goal-scoring contribution from Elena Ruiz (4 goals).

The Netherlands struggled to get their game going, and the chaotic and frantic nature of the game didn’t suit them. The Oranges were also not at all clinical, unlike their opponents, who far better asserted themselves in the game.

It has to be said that the Netherlands might also have found themselves even further behind on the scoreboard, had it not been for their keeper, Laura Aarts – who made an impressive fourteen saves.

Greece were also defensively excellent, keeping Italy at bay for much of the game. Neither team were particularly clinical in attack, but Greece found the goals when it mattered. Eirini Ninou was fantastic in the game, scoring three times for Greece.

The reigning champions Spain will be delighted to be be in another final, and will bid to secure their third European Championship Gold medal. Greece have never won the very top prize, losing in all three of the finals they have played in (2010, 2012, 2018).

Italy and the Netherlands, both who were unbeaten in the competition until today, will compete for the bronze medal, just as they did at the World Championships in Budapest earlier this summer.

Spain had their noses ahead after the first quarter. Maica Garcia wasted no time in opening her account in the game, with her goal from centre 45 seconds into the game. Two minutes later, Elena Ruiz doubled Spain’s advantage with an excellent shot from the left-wing.

It took the Dutch a while before they too scored; and it was Mataro’s 21-year-old Simone Van de Kraats from a powerplay past Martina Terre. Nina Ten Broek, who had only found the net on one occasion in Split, added the Netherlands’ second score. Bea Ortiz’s penalty was the difference after the first eight minutes.

In the second, the game was very end-to-end, and the beneficiary was Spain, and  their young superstar, Elena Ruiz. netted twice; firstly from a penalty, and then from a counter attack. 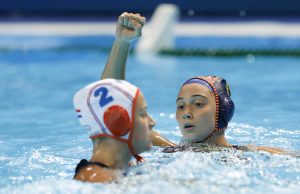 In a bid to slow a chaotic game, Eva Doudesis called a timeout when Bea Ortiz was ejected, and it proved to be a wise decision, as Sabrina Van der Sloot pulled her team to within two goals, with the score at 5-3.

The third quarter was hectic, with both teams really competing aggressively in their challenges. The Netherlands struggled to find an attacking outlet, while Spain still looked menacing.

However, it was the Netherlands who found their feet, and found two goals. It was Brigitte Sleeking who had two excellent shots on the top to draw her team level (5-5). 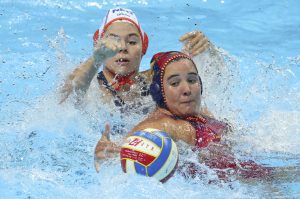 But Spain led once more heading into the last quarter thanks to Elena Ruiz. The seventeen year old, in a league of her own, made an incredible shot from the left side past Laura Aarts – who was practically unstoppable today.

The Dutch were severely hampered by two early goals in the fourth quarter from Spain. Paula Leiton, one of seven Sabadell players in the side, climbed high above her defender on the post, while the seasoned left arm of Pili Pena produced a moment of real quality to make it 8-5.

With little over five minutes to play, Viviane Sevenich, who plays her water polo with a number of the Spanish players in Mataro, gave the Dutch hope with a post-and-in conversion.

Once again, with devastating effect on the counterattack, Spain punished the Dutch.  Annie Espar scored a delightful lob over Laura Aarts to give Spain the three-goal cushion they desperately craved. Two attacks later, Bea Ortiz found the top corner from the left-wing, giving Spain one foot in the final. 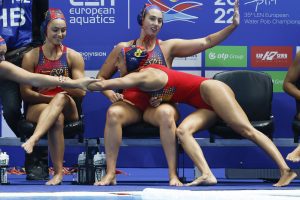 Brigitte Sleeking secured a hat-trick with a nice shot to the near-post, but the Dutch had too much ground to make up, and couldn’t unlock the Spanish defence.

Both teams demonstrated their attacking flair in the opening quarter. At first, Greece took the lead in the game via Eirini Ninou, whose low shot rounded off a swift Greek attack, but in time it was cancelled out by a cross-cage shot from Domitilla Picozzi.

Eleftheria Plevritou made it 2-1 from the 5m line, but Italy answered back with style when Claudia Marletta lobbed the ball over Ioanna Stamatopoulou’s head.

Marletta then had a golden opportunity to put Italy ahead at the end of the quarter, but Ekipe Orrizonte’s 26-year-old attacker got her penalty horribly wrong, putting it a long way off the left hand post. 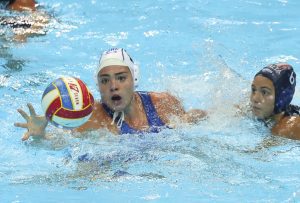 As they did in the first quarter, Greece struck first in the second. Christina Siouti’s smart pass into the centre found her Olympiacos teammate, Eleni Xenaki, who scored with a spectacular backshot.

There was a slight element of misfortune for the Italians when Greece were awarded a penalty when Giulia Viaca was hit by the ball when trying to leave the field of play. But Eirini Ninou converted with confidence, putting the ball into the mid-left side of Caterina Banchelli’s goal.

Italy pressed for the next score, but a series of good blocks and saves for the Greeks kept the Italians at arm’s length.  The Setterosa did eventually break their duck in the second quarter, via their second penalty of the game. Roberta Bianconi stepped up, and fired the ball past Stamatopoulou.

Both teams added to their scores. Margarita Plevritou floated an enticing ball out to the left, and seventeen-year-old Siouti rifled the ball home on the left for Greece. For the Setterosa, the Italian league’s top goal scorer, Silvia Avegno, saw her shot bounce off the bar and drop over the line.

Greece did have a two-goal lead at half-time though, and it was Glyfada’s Eirini Ninou who again thundered the ball into the Italian goal from 6m to secure her hat-trick in the game. 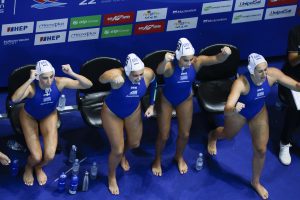 Italy’s extra-player goal in the third gave Italy an early boost, but Greece responded with three goals and some jaw-dropping attacking play. Eleftheria Plevritou propelled a shot into the roof of the Italian net for her second of the match, before Maria Patra and Margarita Plevritou, both on the left, converted with supreme precision.

Midway through the third, Italy began to look more dangerous, and they found the target twice; Silvia Avegno made no mistake from the Italians’ third penalty of the game, while Valeria Palmieri showed incredible strength to hold off two defenders, before firing past Stamatopoulou from 2 metres.

While Italy had gained momentum in the third period, they found themselves with ground to make up once more. Silvia Avegno did get a goal for the Italians, with the aid of a VAR intervention, but it was only enough to cancel out an earlier, well-taken strike by Ioanna Chydirioti (11-8). Tabani scored with seventeen seconds to go, but Greece and Eleni Xenaki has the last say, with a fantastic top-corner finish.