Spain has beaten Hungary as they return to the Olympic final for the first time since 2012. They will face the side that beat them at that final, the USA, in what is shaping up to be an Olympic classic.

Spain’s opponents, Hungary, were really disappointing and never really looked like winning. The scoreline looked close, but Hungary were only ever at an arms-width away from the Spanish. Despite facing a really exciting Spanish outfit who they bettered in the last quarter, the Hungarians really struggled to beat, or even challenge, Laura Ester in the Spanish goal.

Whilst Hungary can still win their first Olympic medal tomorrow in the Bronze match against ROC, Attila Biro and his side would have really fancied themselves to reach their first Olympic final. Miki Oca, however, will be content with the ease with which his side defeated such a big name in world water polo.

The game began with real intensity. Both sides gave away early major fouls and were physical in the defence.

The nerves that Spain had were perhaps evident after they missed an early double man-up that was blazed over the bar by Roser Tarrago. However, the nerves quickly went when the Spanish took the lead via Anna Espar on the left, who fired the ball past Alda Magyari.

Dorrotya Szilagyi then rifled a shot against the post, as Spain then were denied a goal by VAR for Anna Espar as the goal was not adjudged to have crossed the line. But Spain eventually doubled their lead via a phenomenal bouncing shot from Bea Ortiz into the roof of Hungary’s net.

Anna Illes then hit the post again for the Hungarians as they failed to register a goal in the first quarter.

Anna Espar then nearly put her side three ahead with a looping lob, but it could only hit the outside of the post before returning to Alda Magyari’s grateful arms.

But eventually, Anna Espar did grab the second goal for Spain three minutes into the quarter with a halo shot just above Magyari’s head.

Hungary looked rattled and totally disjointed, but they eventually kickstarted their game with a powerful driven shot from Dorottya Szilagyi on 5m. 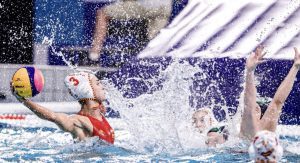 However, Spain halted them right in their tracks; firstly when Anna Espar’s bounce shot gave her a hat-trick, before poor defending allowed Judith Forca Ariza to continue her great goal scoring form from the quarter-final to put Spain 5-1 ahead.

Attila Biro needed more from his side if they were going to ensure the game remained competitive, but his timeout only led to Dora Leimeter’s shot firing straight at the unchallenged Laura Ester.

Hungary did manage to pull a goal back with ten seconds left in the half via a stunning Anna Illes shot into the top-right hand corner, but it was an extremely disappointing quarter from a side trying to prove they deserve their first-ever Olympic medal.

Into the second half, Hungary woke up and scored with their first attack via Szilagyi, but sixteen-year-old Elena Ruiz nearly broke the net with a thundering shot past Magyari – who could only admire it fire past her.

Then a huge moment came in the game when Laura Ester Ramos saved a one on one from Rebecca Parkes to huge roars from the Spanish bench.

But Ester Ramos could do nothing when Bea Ortiz inexplicably gave away a soft-penalty foul for Szilagyi to score her third goal of the game.

Alda Magyari, who had been fairly uninspiring during the game so far, then pulled out a brilliant save from Paula Leiton’s post shot on 2m to give her side some motivation. However, Hungary just wasn’t taking their chances and had no solution going forward to bypass the Spanish press.

With three minutes to go in the quarter, Elena Ruiz then scored another beautiful bounce shot on position four before Maica Garcia grabbed her seventh of the tournament on the post to take Spain four goals ahead. With less than ten seconds left in the period, Spanish captain Pili Pena made another steal to ensure her side kept their four-goal lead going into the last.

Hungary needed goals quick, but Spain looked the more likely to score when Anna Espar’s shot from 4m somehow hit the bar instead of the back of the net.

Rita Keszthelyi, who had been completely absent in the game, tried a lob that didn’t work from the left-wing, but scored from the pit with a patient, close-range, finish. Hungary then scored immediately after when Spain had a double man-up that Vanda Valyi put away tidily from the right.

As Hungary had scored two goals in a row and now were within two, the momentum seemed to favour them for a last quarter comeback, but Spain had the better chances with two shots of the post within a minute from Maica Garcia Godoy.

Greta Gurisatti had a half-chance to get one back with a minute to go for Hungary, but Laura Ester made a good save for Spain to put one foot in the final.

Hungary then called a timeout with less than thirty seconds to go, but Tarrago was there for the steal, and sealed Spains place in the Olympic Games final.