Stories that shaped water polo in 2019 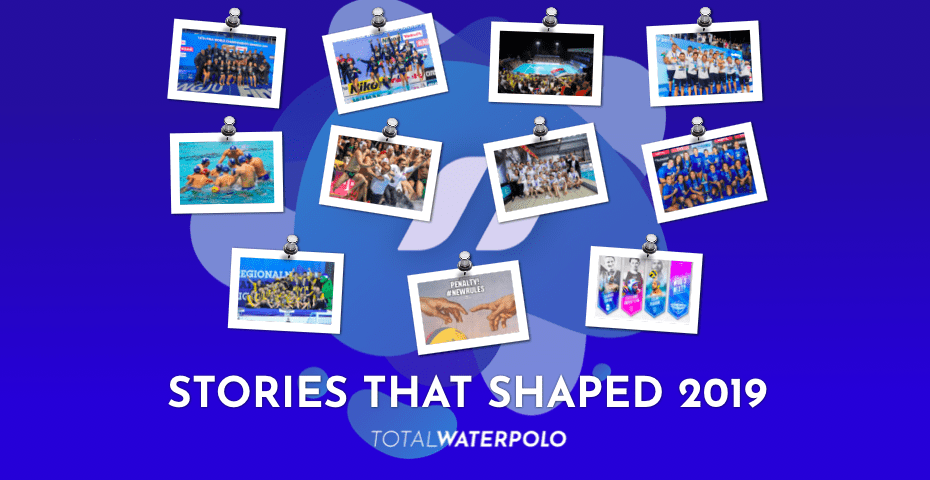 The end of the year is always a good opportunity to summarize what has happened in the past twelve months.

These are the stories that we picked as the most interesting in 2019.

The USA female water polo team clinched the gold at the World Championships in Gwangju and became the first-ever team (male or female), which won three world titles in a row.

The Americans’ success in South Korea was something that everybody expected since Team USA has dominated the women’s water polo in the last year. Since 2014, the USA has won gold medals in all world competitions (1 at Olympic Games, 3 at the World Championships, 6 in the World League and 2 at the World Cup).

This season, they added another Pan American gold to their tally. They ended the year with a perfect record (37 wins in 37 games) and extended their winning streak to 68 straight wins in the last two years.

Adam Krikorian’s squad is so dominant, and it will be a surprise if they don’t clinch the gold medal at the Olympic Games in Tokyo.

Italian reached the top at the male tournament at the World Championships in Gwangju. The Italians weren’t the strongest favorites for the title. But, as usual, the team guided by Alessandro Campagna was in a circle of the medal contenders, although Italy has no big individual stars, unlike Hungary, Croatia, Spain… (Serbia arrived in Gwangju with the rejuvenated squad).

But, the Italians achieved big success thanks to team unity. Italy had a slow start in Gwangju (slim victories over Germany – 8:7 and Japan – 9:7 in the group stage). They edged out Greece in the quarterfinals (7:6), then beat Hungary in the semifinal match (12:10), while they outplayed Spain in the final (10:5).

Francesco di Fulvio was voted the MVP of the Championships. Besides him, among the best Italian players in Gwangju were goalkeeper Marco del Lungo, Pietro Figlioli, Stefano Lungo…

Almost each of the final games at the major competitions in 2019 was very exciting. Still, the gold medal match at the World League Super Final was a spectacle – an outstanding battle between two excellent teams in terrible weather conditions.

The Super Final was played in Belgrade, two arch-rivals Serbia and Croatia faced off. Croatia opened the match with a 4:1 lead, Serbia responded with five straight goals (5:4), but before the last period, the Croats had an 8:7 advantage. When the fourth quarter started, torrential rain hit the Tasmajdan poll. But, there was no lighting, and the game could be continued. Despite the rainstorm, the spectators didn’t leave the stands and helped Serbia to win the match. The decisive goal came 17 seconds from the end when Serbia’s captain Filip Filipovic scored from a penalty for the final score 12:11, and the home fans exploded with joy at the full stands after the final buzzer. Serbia won the gold, 100.000 $, and, most important, became the first team that has qualified for the Olimpic Games.

-It was a fantastic game, full of great turns, What gave us the edge was the fact that even after the rain came down, no fans left the stands, they stayed and cheered for us. Under these circumstances, we just had to win. – Dejan Savić, head coach of Serbia said.

Croatia is the only male national team that won a medal at each of the three major competitions in 2019. But, this time, the Croats ended the season with no gold.

The first big competition for national teams was LEN/FINA Europa Cup. The Final Six was played in Zagreb. The Croats reached the final game, where they lost to Hungary (8:10).

Two and a half months later, Serbia edged out Croatia in the mentioned World League final game (12:11).

Even though they didn’t take a gold medal, Croatia is the best male water polo team of the year by FINA’s criteria.

The senior national team of Greece hasn’t won a medal at major competitions since the bronze in the 2016 World League. But, Greek water polo has a bright future.

The season of significant competitions was ended in December, with the World U20 Championships in Kuwait. Greece retained the title, won in Belgrade 2017, by defeating Serbia in the final (6:4).

The Greeks are the reigning World, but also the current European junior champions.

Their almost flawless performance in the semifinal against Croatia (15:6) and tight defense in the final (Serbia scored just one goal in the first three quarters) are only a few of the indications that this is a very talented team.

The leaders of Greek new generations are Konstantinos Gkiouvetsis, Dimitrios Nikolaidis, Alexandros Papanastasiou, who all won world gold medals in 2017 and 2019. Papanastasiou has already played in the senior team at the World Championships. The three will be, maybe, the stars at the next Olympic Games in Tokyo, if Greece secures an Olympic berth. Still, their great chance to show their full potential will be the 2024 Olympic Games in Paris.

Hungarian Ferencvaros won the Champions League and continued its magnificent series of trophies.

Ferencvaros arrived at the Final Eight in Hannover after winning 4th place in the group stage. On their road towards the trophy, the Hungarians defeated the 2016 champion Jug in the quarterfinals (10:9). They ousted 2014 winner Barceloneta in the semifinals (9:7).

Ferencvaros joined a circle of clubs that managed to win all three trophies in the European club’s competition. Before the title in the Champions League, the Hungarians won the discontinued Cup winners Cup four times (1974, 1977, 1979 and 1998) and two Euro Cups (2017 and 2018).

Marseille won the LEN Euro Cup and became the first French club that clinched a trophy in the European clubs’ competitions.

In the final, Marseille played against Jadran, the best Montenegrin club. Both teams were eyeing the first European trophy in their history. Both games in the final were very balanced and thrilling. Marseille edged out Jadran in the first game, played in France (9:8), while the return leg in Montenegro ended with no winner (7:7) and Marseille lifted the trophy.

Spanish Sabadell became the European champion for ladies for the 5th time.

Sabadell was the host of the Euro League Final Four. In the final game, the Spaniards faced Olympiacos (Greece). The Greek side was leading 11:8 five minutes before the end. But, Sabadell produced a 5:0 rush in the remaining time and celebrated a 13:11 win.

Orizzonte (Italy), the eight-time Euro League (Champions’ Cup) winner clinched the LEN Euro Trophy this year. The final tournament of this competition was played in Kirishi (Russia). Orizzonte defeated UVSE Budapest (Hungary) 10:9 in the final and won its first LEN Trophy. Orizzonte’s coach Martina Miceli became the first winning female coach in the LEN Trophy, and the second at the European stage after Greek Alexia Kammenou, who led Vouliagmeni to Champions Cup triumphs in 2010 and 2011.

After seven years without any trophy, seven-times European champion Mladost Zagreb returned to the top of the Croatian, but not just Croatian water polo.

Mladost edged out Jug 13:12 in the Regional League final. Later, the Dubrovnik-based side won the national championship. Jug overcame Mladost 3:0 in the best-of-five final series.

But, Mladost ended the year winning the trophy in the Croatian Cup (16:12 victory over Jug in the final) and enters the new year with solid chances to reach the LEN Champions League Final Eight (they are 4th in Group B after seven rounds).

From season to season, Mladost has been growing as a team, and it can be an equal opponent to the best teams in the world.

A large set of new rules was implemented in the water polo game in 2019.

Some of them are: resetting the clock to 20 seconds after corner throws, in events after exclusions and after a shot is taken that does not change possession, a free throw is taken at the spot of the ball…The goalkeeper is allowed to move into the opponent’s half of the field and touch the ball past the half distance line… More about new rules you can find here.

In efforts to promote water polo, Total Waterpolo organized the traditional annual Total Player award. We pick the best male and female players in the world for the third time, but this year’s voting has been the largest so far. Even 77 members were in our unique Expert Jury. This was maybe the most transparent voting for choosing the best water polo players ever, as we published articles with votes from our jurors. Also, more than 10.000 water polo fans voted for their favorites.

Coaches that led their teams at the World Championships and in European club’s competitions and many other water polo trainers, together with media representatives and fans, decided that Ashleigh Johnson (USA) and Denes Varga (Hungary) were the best in 2019.

Winners of most important competitions in 2019