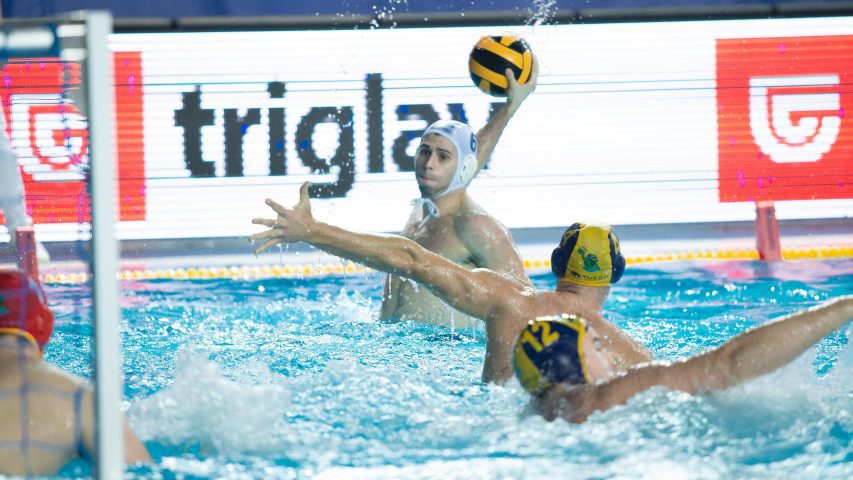 Favorites continued winning in the Premier Regional League, but the evening session of the 2nd competition day brought a first surprise.

Title-holder Radnicki barely saved a point in the match against Primorac (10:10) in the first round in Group B in Split. In other two matches in Split, there were no surprises: Crvena Zvezda – Solaris 18:8, Jadran Split – Mornar 17:7.

The most exciting game of Round 3 in Group A, was the “Croatian classic”, the encounter between Jug and Mladost. Jug defeated its big rival, but much harder than expected. The Dubrovnik-based side came back from two goals down and recorded a 13:10 victory.

Group A (Belgrade), Round 3 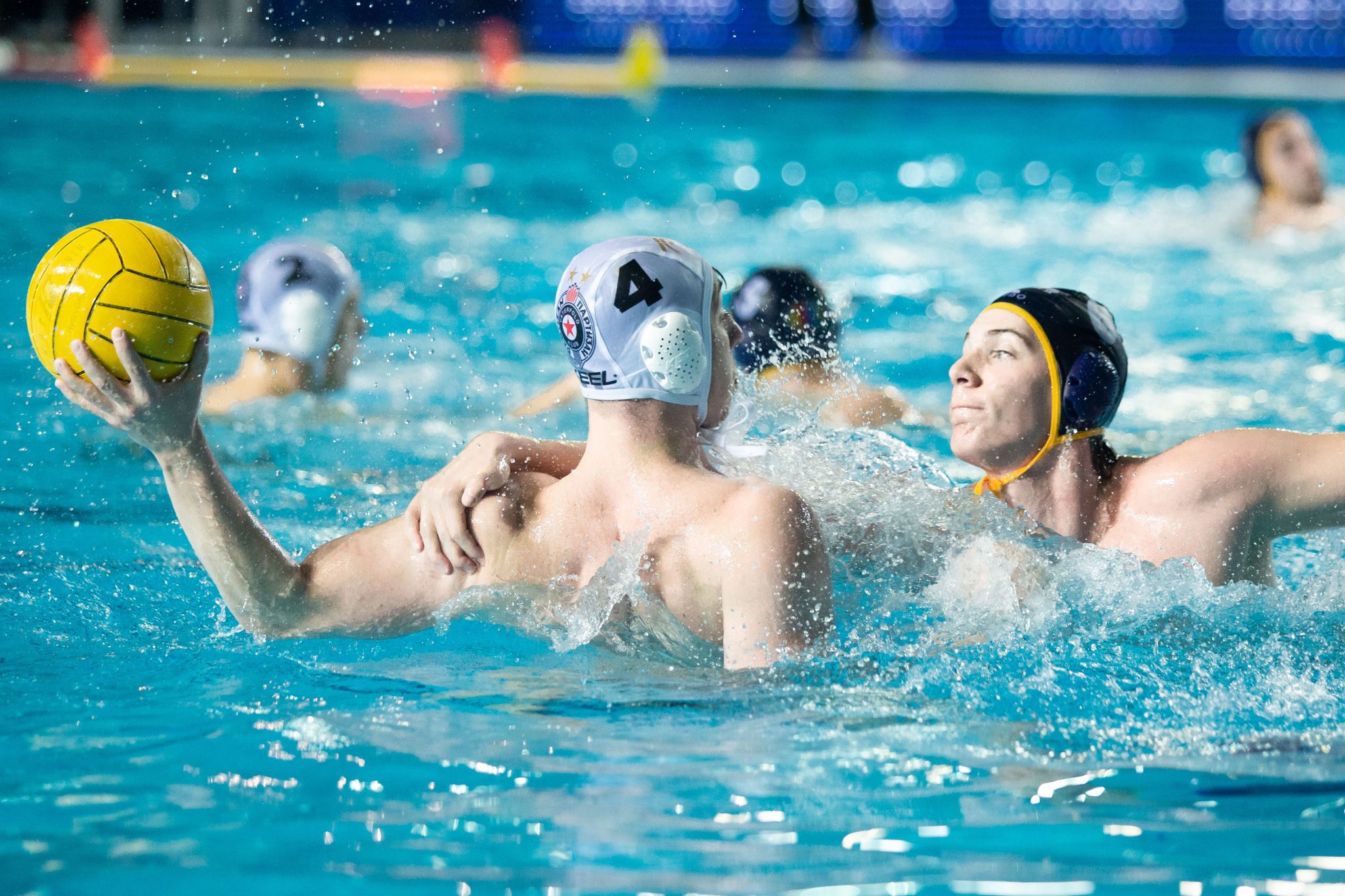 Partizan, which had a bye in the morning session, demolished Šabac in the first game of the afternoon session. Šabac equalized just once (1:1). Shortly after, the game turned into a one-sided contest. Partizan outplayed Sabac completely in every aspect of the water polo game. Milan Bulajić, who replaced first-pick goalkeeper Dimitrije Rističević, commanded Partizan’s defense. Captain Milan Aleksić and American Alex Bowen led the attack, and Partizan stormed to a 20:5 victory, despite the fact that the best scorer Filip Radojević missed the game.

Šabac, which fought hard against Jug and Novi Beograd, ran out of gas for the third task at the challenging tournament in Belgrade. Ognjen Stojanović, the 2019 World League winner, is still out of the team due to an injury.

„We found our rhythm in time. Almost everything in our team worked as it should. Šabac had two tiring games before the duel with Partizan, and that fact partly affected the result. Anyway, our today’s performance is a model we aspire to. We have to continue in this way. A lot of hard matches are ahead of us, an experienced Partizan’s ace Stefan Mitrović said 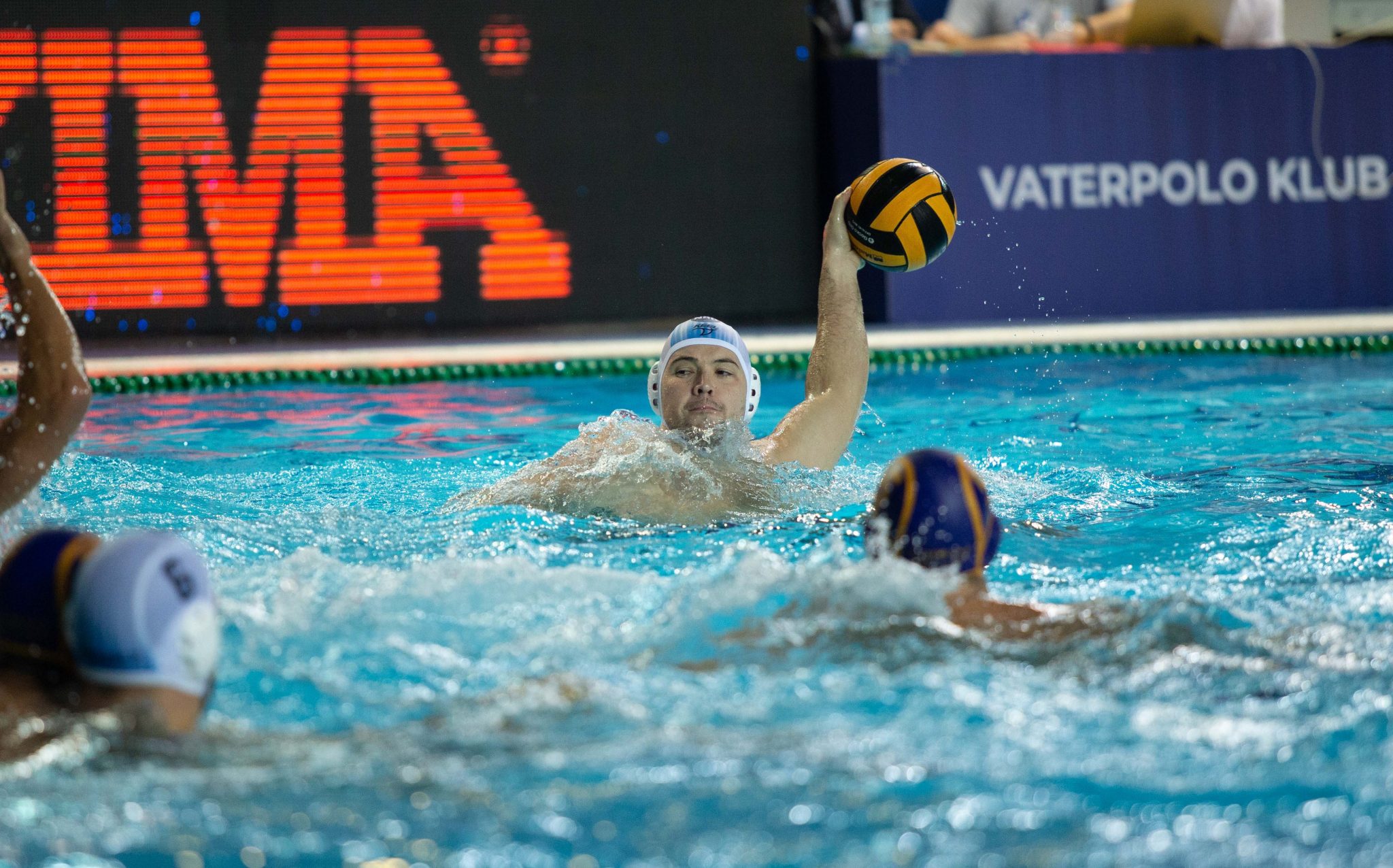 Novi Beograd proved once more that it had entered the Regional League with the highest ambitions. The hosts opened the game with a 4:0 blast. Jadran was trying to come back, but Novi Beograd ruled the field. Captain Dušan Mandić played his best match at the tournament so far, netting five action goals with almost a perfect percentage of shots (5/6). Duško Pijetlović, who missed the previous two games, also, gave a significant contribution to the home team’s victory.

„Jadran is a good and physically well-prepared team, but we controlled the game and continued the series of convincing wins. We managed to maintain a continuity of good performances despite the packed schedule, Nika Shushiashvili, Novi Beograd’s leftie, said.

“Despite the loss, I can’t be displeased with the game. We played even better than in the win against Budva. Our very young team fought until the end, they were very motivated, and they did their best in the game against the high-quality team of Novi Beograd. If we hadnt conceded a few easy goals the difference at the end of the game would have been smaller”. 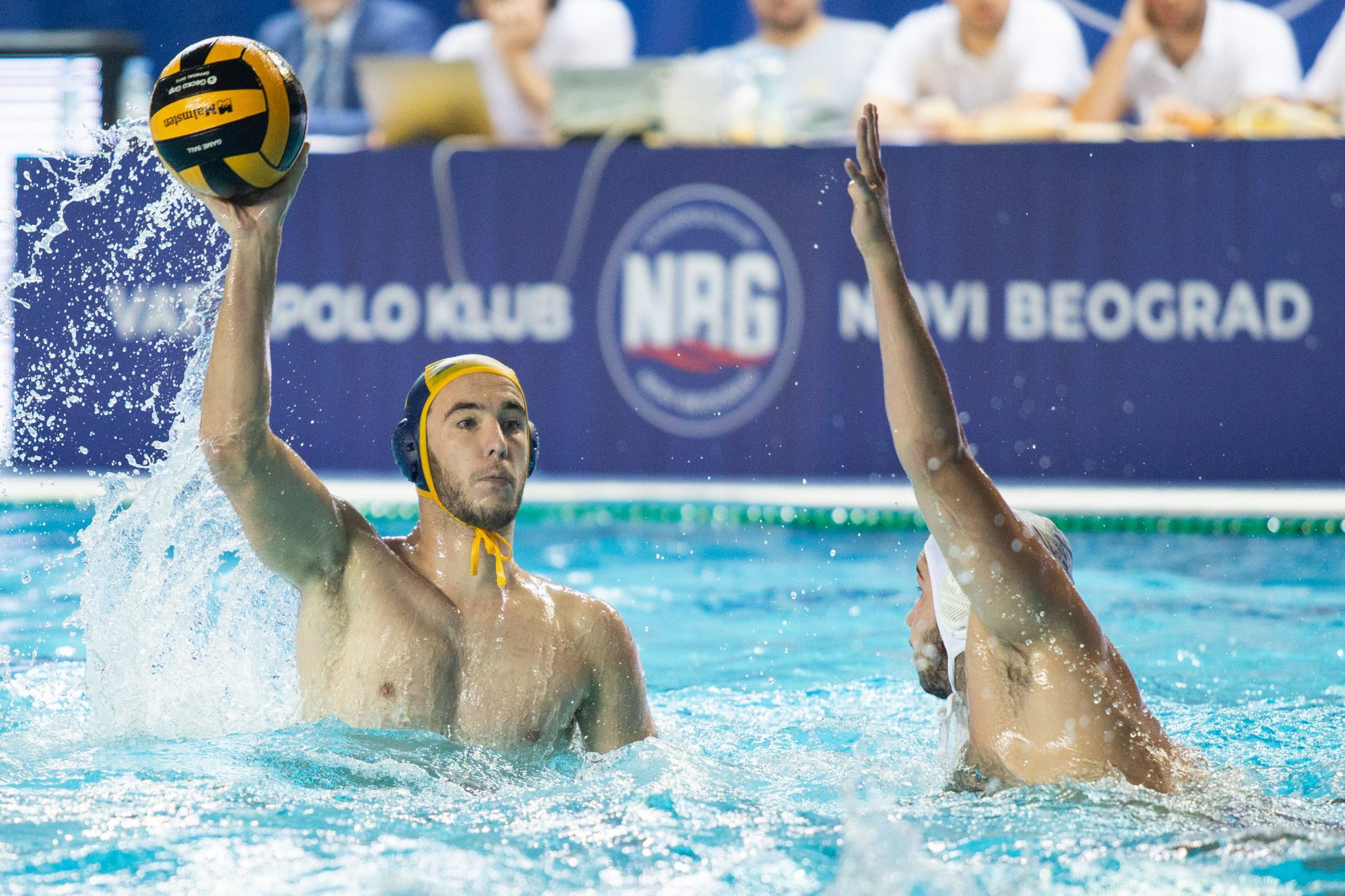 However, today’s match had a different storyline. Mladost, which was knocked down by Novi Beograd in the 2nd round, recovered. The Zagreb-based side prepared well for the game against the archrival.

Jug water polo players led throughout the first half, but their advantage was never larger than two goals. Marko Žuvela gave Jug a 5:3 lead in the 11th minute. After that Jug couldn’t find the net for more than ten minutes. Mladost netted four goals to turn around the two-goal deficit to a 7:5 lead. Mladost’s goalkeeper Ivan Marcelić was outstanding in the second and third periods, but he couldn’t save a shot from Argyropoulos in the 21st minute. The Greek ended Jug’s scoreless phase with a goal from the 5m line. Shortly after, his fellow countryman Papanastasiou leveled at 7:7.

Three goals were scored in the last 90 seconds of the third quarter. Bajić put Mladost in front (8:7), Argyropoulos equalized from another penalty shot, but Dašić closed the quarter with an action goal and Mladost entered the final quarter leading 9:8.

But, Mladost didn’t keep the momentum gained in the third quarter. Jug tightened its defense after the last break (Vukojević replaced Popadić in front of the goal). The three Greek players (Argyropoulos, Kakaris, Papanastasiou) were Jug’s power engines. Each of them scored a goal in the first four minutes of the last period, and Jug earned an 11:9 advantage. A minute and 49 seconds from the end, Papanastasiou sent the ball into the net for 12:9 and that was the end of the contest.

The players are tired due to the hard rhythm of the tournament, so I can’t be too critical about the mistakes in this match. All is well that ends well. Mladost isn’t on our level this season, , but it is still a good opponent, which it showed today. The change of goalkeeper before the fourth period in front of Jug’s goal and the fact that two Mladost players finished the match earlier due to personal fouls made the difference in the fourth period.. 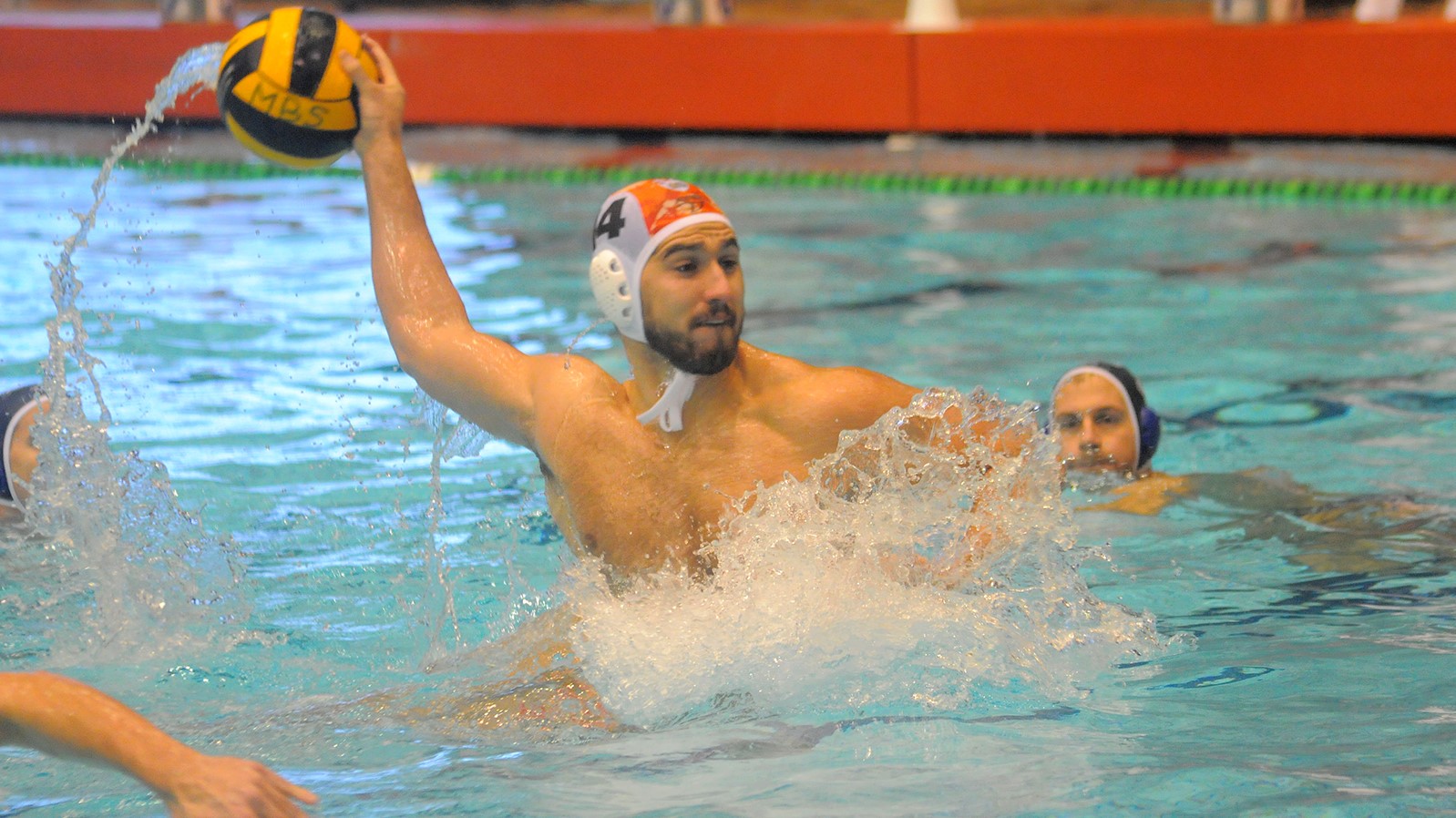 A draw in the game between Primorac and Radnički has been the biggest surprise of the Premier League so far. Moreover, the title-holder can be happier with this outcome, since Primorac dictated the pace throughout the game. Radnički saved a point in the last minute of the match. In the second quarter, the Montenegrins built a 4-goal advantage (6:2, 7:3, 8:4). Radnički managed to cut the deficit to one goal before the final quarter. The first goal in the fourth period was scored 02:58 minutes before the end when Matković doubled Primorac’s advantage (10:8). Immediately after, Miloš Ćuk replied for 9:10. Nemanja Stanojević converted a man-up 56 seconds from time, to secure a point for Radnički.

“We are a better team than Primorac, but we started very badly and the rival punished us for that. Still, we managed to come back and save a point. The tournament is long, so we don’t have much time to analyze this match and we must prepare better for the next one, Josip Vrlic, Radnicki’s center-forward, commented.

Full statistics and play-by-play action on Total Waterpolo Arena
At the end of the day, Jadran Split made no mistake in the Split derby. The former European champion found it easy to beat the host of the tournament. Luka Bukić was the best scorer with four goals.