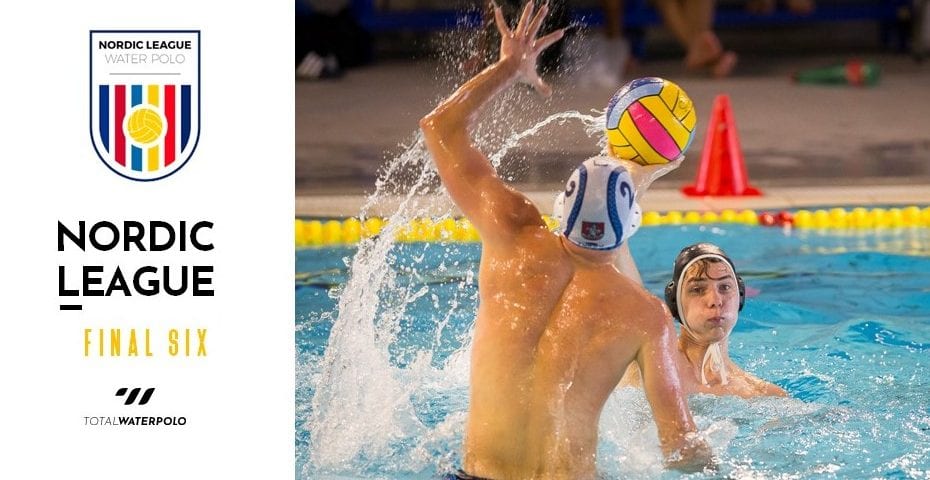 Turun Uimarit, the club based in Turku (Finland), won the title in the 2nd edition of the Nordic Water Polo League. Turun defeated 2019 champion Jarfalla (Sweden) 18:15 in the gold medal match of the Final Six tournament.

The Final Six of the Nordic League 2019/20 has been held in Stockholm this weekend. Six teams took part. This season, nine teams from four countries (Sweden, Finland, Poland, Lithuania) competed in the League. In the first phase, they were split into two groups. The top three teams from each group advanced to the F6.

For all the results of the 2019/20 Nordic League visit the tournament page, powered by Total Waterpolo Arena

All the match’s and the players’ statistics: JRF-CTS

All the match’s and the players’ statistics: TUU-SPI

Two quarterfinal matches were played on Day 1. LSTW Lodz and Vilnius, as the winners of their respective groups have directly qualified for the semifinals, so they enjoyed a bye day at the start of the competition, but it didn’t help them a lot.

Jarfalla faced Cetus (Finland) in the quarterfinals. The Swedes led throughout the match. Early in the fourth period, they had a 3-goal advantage (8:5). Still, Cetus managed to come back and take a lead (11:10) with 25 seconds to go. But, Jarfalla’s Niklas Nord beat the buzzer. He converted a man-up two seconds before the end for 11:11 and the match went into a penalty shootout. Jarfalla recorded a 15:14 victory.

The second quarterfinal game was an encounter between a Swedish and a Finnish club, too. Unlike the first quarterfinal match, in this game, the Finns recorded a victory. Turun Uimarit beat home team SPIF Vattenpolo Stockholm 13:9.

All the match’s and the players’ statistics: LST – TUU

All the match’s and the players’ statistics: VMS -JRF

VMSC from Vilnius was defeated by Jarfalla in the semifinals. The Swedish club controlled the game, while the Lithuanians managed to equalize a few times. In the 29th minute, VMSC caught its rival for the last time – 7:7. Jarfalla responded with three goals and jumped to a safe 10:7 lead and that decided the match.

The game LSTW Lodz – Turun offered a lot of excitement in the last quarter. Four minutes before the end, LSTW had a 2-goal advantage (12:10). After that, Turun produced a 4:0 rush and went 14:12 up 91 seconds before the final buzzer. In the remaining time, LSTW scored just a consolation goal.

All the match’s and the players’ statistics: CET-SPI

All the match’s and the players’ statistics: VMS – LST

VMSC Baltic Amadeus clinched the bronze medal after defeating LSTW Lodz in a flood of goals. The difference was five goals after the 32 minutes of play, but the Lithuanians had to work hard to secure the win, although they were ahead from the middle of the first quarter until the end of the match (LSTW had an opening 1:0 lead, but VMSC turned the deficit to a 3:1 lead quickly). The Lithuanians had a solid 13:9 advantage deep into the third period. But, LSTW was able to come back. The Poles were just one goal behind the Swedes (14:15) three and a half minutes from the end. VMSC retook control and secured a convincing win with four unanswered goals.

All the match’s and the players’ statistics: JRF-TUU

The final game was a replay of last season’s match for the gold medal, played in Turku. Last year, Jarfalla clinched the trophy by beating Turku. The Finnish club didn’t win the gold medal on home soil, but it was successful in the capital of Sweden today.

The first two quarters offered a close battle. Jarfalla had a marvelous start and grabbed an early 3:0 lead. But, Turun returned in the match and equalized in the 10th minute (4:4). After a close battle in the second period, Jarfalla entered the third quarter with a slim 8:7 advantage. The Finns played excellently in the third period. They netted six unanswered goals and earned a 13:8 advantage. Twelve seconds before the last break, Jarfalla scored its first goal in the second half of the match for 9:13. The Swedes fought hard, but they couldn’t come back. Jarfalla reduced the gap to two in the 3rd minute of the final period (12:14). Still, Turun didn’t let Jarfalla go further. The Finnish club replied with three goals and earned a comfortable 17:12 advantage in the 29th minute.

Turun recorded an 18:15 victory. Alexandru Baltean and Pavel Mihailov were the heroes of the win. Each of them scored five goals.