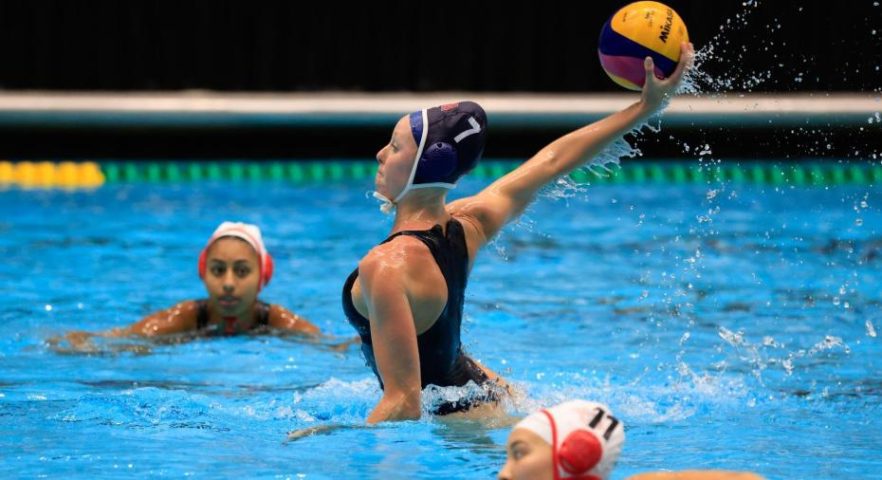 The United States have won Gold at the Pan American Junior Games in Indianapolis, wiping the floor with Canada, winning 17-4 in the Gold Medal match.

The women’s tournament, which has been taking place at the Indiana Natatorium since July 11th, has seen six teams participating in the competition – United States, Canada, Brazil, Argentina, and Chile. Mexico were due to attend but later withdrew. You can read about the corresponding men’s competition via the link.

As for the matches though, six goals from centre-back Ava Knepper helped the United States on their way to their emphatic Gold Medal win. Two other very promising players also found themselves on the scoresheet; Rachel Gazzaniga (SOCAL) netted a hat-trick, and Ava Stryker converted twice (Santa Barbara 805).

Canada’s goals came via Serena Browne, Katherine Featherstone, Raha Peiravani and Alicia Petkov. But the Maples were undoubtedly second best in the contest – which was reflected on the scoresheet.

Team USA made light work of all the opponents they faced this week in a way even the Senior National Team would be proud of: playing six, winning six, scoring ninety-four and  conceding just twenty goals.

It seems that the young American side, coached by Ethan Demato, hugely benefitted from participating in the Senior Intercontinental Cup in Lima earlier this year. Eight players in this Pan American winning team represented the senior team in Peru back in March.

Brazil won the Bronze medal in an equally convincing fashion, beating their South American neighbours 18-6. Stefany Azevedo and Rebecca Moreira both scored four for Brazil – the latter being one of six players in this game who appeared for their senior teams in Budapest a few weeks ago (Ruiz, Agnesina, Bacigalupo & Canales for Argentina, Cavalvante & Moreira for Brazil).