Uros Stevanovic: Ready for once-in-a-lifetime opportunity; I’ll be back to coaching juniors 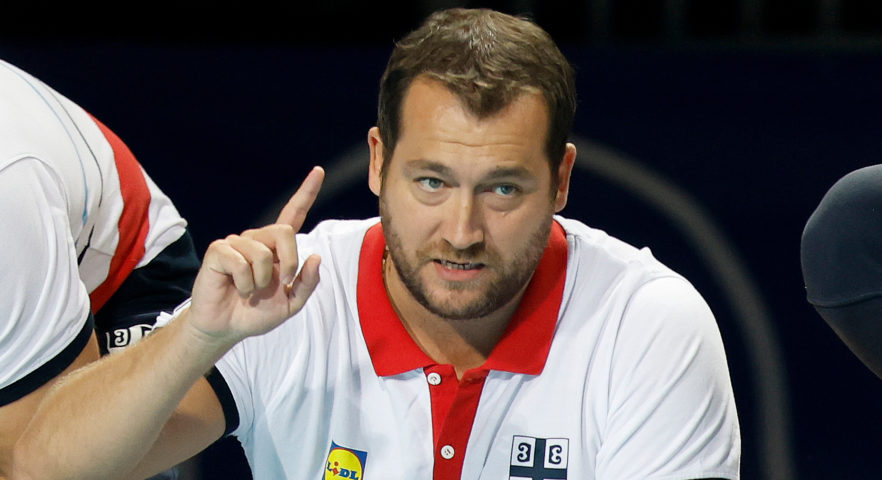 The biggest news in the world of water polo after the European Championships and before the start of the club season was Dejan Savic’s resignation as Serbia’s head coach.

After ten very successful years at the helm of the Serbian national team, the legendary coach decided to leave because of a disappointing summer of 2022. A rejuvenated team was far from the European, World Championships and World League medals.

A few weeks after Savic’s resignation, the Water Polo Federation of Serbia appointed Uros Stevanovic as the new head coach. The Federation’s decision wasn’t surprising. Stevanovic achieved excellent results coaching junior and youth national teams in the past several seasons. In addition, he has had a lot of success at the clubs’ level, primarily coaching Radnicki. He has been on the Kragujevac-based team’s bench since 2013.

Stevanovic will debut as Serbia’s head coach in a few days. The Olympic champions travel to the USA, where they will play in the friendly tournament against the USA and Spain in Lewisville and Dallas (December 28  – January 3).

Total Waterpolo spoke to Stevanovic before his debut. He shared his thoughts on the new season, Dejan Savic, plans with the Serbian national team, Olympic qualifications, Radnicki, etc.

There was no hesitation

Taking over a national team of a water polo powerhouse like Serbia is a big step in the career of every coach. The expectations are always high. Besides, Stevanovic succeeds the man whose name became a synonym for the Serbian water polo in the recent years

Coaching Serbia is a big honor and responsibility, so it can be a double-edged sword. Still, Stevanovic didn’t hesitate when the Serbian Water Federation offered him a job. He said “Yes” immediately and accepted a big challenge.

“There was no hesitation. This job is a once-in-a-lifetime opportunity and is the pinnacle of a coaching career. You can’t choose when the opportunity will come and when you will get a chance to coach the national team”.

Stevanovic’s appointment is actually his return to the coaching staff of the national team. He was Dejan Savic’s assistant between 2013 and 2017. After those four years, from 2018, he worked as a junior and youth national team head coach.

He started his coaching career while he was very young in the youth and junior teams of Crvena Zvezda. From 2008 to 2011, he worked with the younger categories of Partizan and was Igor Milanovic’s assistant in the first team. He led Partizan as a head coach in 2012 when the club won the LEN Super Cup. Coaching Radnicki, Stevanovic won the Serbian Cup, Serbian League, and Regional League.

For most of his career, he has been a head coach. Still, he worked as an assistant to some great water polo experts.

Would you single out a coach who mostly influenced of your career and left a mark on your coaching path?

“I have to single out Dejan Savic. I had the honor of working with him in the most successful period of the Serbian national team, between 2013 and 2017.

As Dejan Savic’s assistant, I learned a lot, progressed, and matured as a coach. So, I built my views on water polo sport through his vision. But, like every coach, I have something of my own in my way of work. I will try to implement that in the senior national team.”

This year was booked with many water polo competitions. The season for clubs was long. In the summer, three big tournaments took place between mid-June and early September (the World Championships, the World League Super Final and the European Championships).

Besides, Serbia is yet to qualify for the European Championships in Israel. For the first time since its independence, Serbia has to play in the qualifications because it finished 9th at the Europeans in Split. The Europan qualifiers are in late June (23 – 25).

What are Serbia’s main goals in another packed season?

Earning an Olympic berth is the main goal that is ahead of us at the moment. The road to the Olympic Games will be more difficult than before due to the change in the format of the qualification. Besides, there have never been so many teams that are contenders for spots at the Olympic water polo tournament.”

Will Serbia and other national teams be able to prepare properly for challenges in 2023?

“After Dallas and before the World Cup in March, we will try to get together for weekend preparations as much as the schedule of club competitions allows.

Unfortunately, the only thing we need is time, which we don’t have. The calendar of the competitions for the clubs is overcrowded. There is not enough available time for training even in the clubs, and there won’t be in the future, because we have four big tournaments for the national teams’ competitions in one year.” 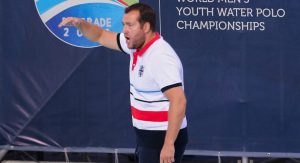 Stevanovic’s first official (LEN or FINA) competition as Serbia’s head coach will be the qualifications for the newly launched World Cup in March. The Olympic champions were drawn into Group B of Division 1. This group seems stronger than the other one. Serbia will play against European champion Croatia, world champion Spain, then Montenegro and two teams that have made progress in the last few seasons – Australia and Georgia.

“It’s great for the Serbian national team that it will play the World Cup qualifications in March – a few months before the European Championships qualifiers and the World Championships. We need as many preparations and matches against quality teams, primarily because we won’t have opportunities for longer preparations and we won’t have many pieces of training before the qualifications due to an overcrowded calendar.”

As we already published, Stevanovic picked 18 players for the American tour. There is one change compared to the originally composed roster (Ognjen Stojanovic replaced Nikola Lukic).

Ferencvaros’ center-forward Nemanja Ubovic is among the candidates for the best 13 again, for the first time after four years. Stevanovic says he counts on all water polo players who have the right to play for Serbia.

The Olympic champion from Rio Milos Cuk, who hasn’t played for Serbia since the last year, might return.

“I spoke to Cuk about his possible return to the national team, and the question remains open in the coming period.”

After the Tokyo Olympics, several Serbian superstars retired from the national team, and a significant rejuvenation began. Is there room for adding new, younger players to the roster? Will some of the boys you coached in the U18, U19 and U20 national teams get a chance soon?

“As for rejuvenation, the players who were last year’s world U20 champions and this year’s European U19 champions are certainly candidates for the national team. It is up to them to earn a call-up with plays in their clubs.”

Stevanovic composed its coaching staff. His assistants will be Stefan Ciric, the head coach of the 2nd-best club Noisy-le-Sec; Darko Bilic from Vojvodina; Milos Ostojic (who will coach goalkeepers); Dajana Zoric (conditioning coach); Vladimir Radovic (chief physiotherapist) and Ivan Marjanovic (doctor). All of them experienced work in the coaching staff of the Serbian national teams as Dejan Savic’s assistants or Stevanovic’s assistants in the junior and youth teams. 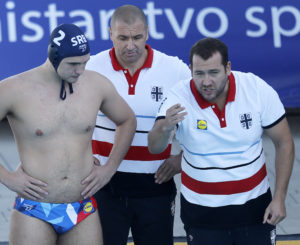 In your opinion, which of these medals is the most remarkable feat?

“If I have to choose, I single out the first one of these medals – silver at the World Championships in Kuwait 2019. It was a tournament for the players born in 1999 and younger, while we had only one player of that generation. Besides, the medal in Kuwait came after a dry period as far as medals in Serbia’s younger categories are concerned. The success was the beginning of a row. It was followed by golds in Prague and Podgorica, silver in Belgrade, and the title of the Mediterranean champion at this year’s Mediterranean Games, in which the U18 teams participated.”

“Working and being a part of young players’ development, growth, and maturation is the most beautiful part of a coaching job. I will certainly be back to work with juniors someday.”

One of the milestones of Stevanovic’s career dates back to 2016. VK Radnicki, the club he coached between 2013 and 2016 and led to the Champions League final, to the title in the Serbian Cup, was pressured by many problems and ceased to exist.

Stevanovic had offers to move to some other club. He had a good CV as a coach already at that time. Still, he didn’t leave Kragujevac. Along with Jugoslav Vasovic (VK Radnicki’s sporting director), he was one of the founders of a new club KVK Radnicki (Kragujevac Water Polo Club Radnicki), which started competing in Serbia’s lowest league.

What motivated you to stay in Kragujevac and start from “ground zero”?

“ Six years ago, the situation in Serbian water polo wasn’t as good as it is now. This season, we have two clubs in the Champions League. Three teams played in the LEN Euro Cup eighth finals, and Sabac advanced to the quarterfinals.

In 2016, Novi Beograd wasn’t founded yet. Sabac was at its beginning. The crisis in Partizan was deeper and deeper. Crvena Zvezda trained and played matches outside of Belgrade, while Radnicki ceased to exist.

I agreed with Jugoslav Vasovic, and we decided to stay. Many children trained in VK Radnicki’s water polo school and started playing in junior and youth teams. We had good working conditions that no one had in Serbia as far as swimming pools are concerned. We tried to make a new base for Serbian water polo. Now, I can say that we succeeded and achieved that goal.” 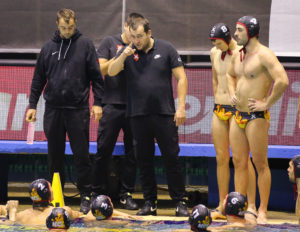 Many kids train in Radnicki, but the first team has also achieved significant success. In the beginning, Radnicki’s first team was composed of junior and youth players. It won 3rd place in the third league and qualified for the Second Serbian League. Just three and a half years after its founding, KVK Radnicki won its first trophy – the  2019/20 Serbian Cup. In 2021, it shocked many favorites by winning the Regional League, and shortly after, it became the Serbian Champion. Because of these successes, it received a Champions League wild card.

Radnicki made big progress in the past years. Did you expect or plan something like that?

“This season, our objectives are to qualify for the Champions League Final Eight and battle for the trophies in the Serbian League and Cup, as well as in the Regional League. At the end of the season, we will see if  these objectives are realistic.”