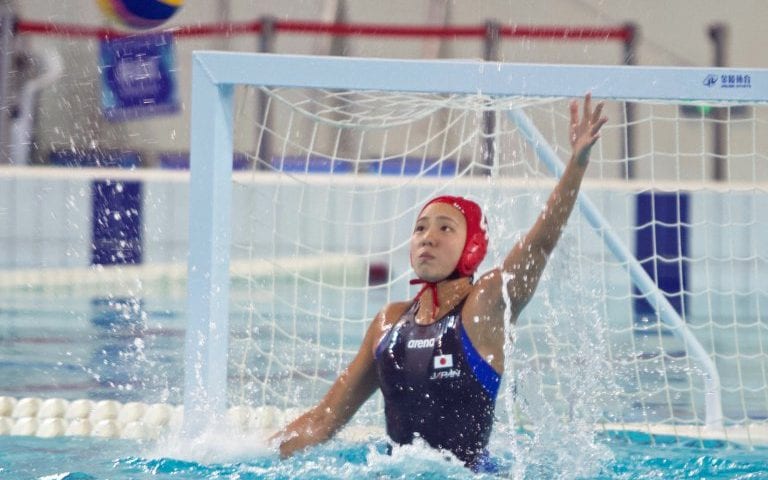 Day three of the FINA Women’s Water Polo World League Super Final is over. Without major changes in the standings, tomorrow brings the quarterfinals.

A three-goal, third-quarter haul in 101 seconds proved a critical turning point in this close encounter. That, a missed penalty attempt by Australia and better extra-man statistics, gave Spain an excellent second victory.

When three goals behind three minutes into the third period, Spain struck back with a vengeance through Anna Espar with a penalty strike, Beatriz Ortiz on the counter and Espar again from the field for 8-8. Australia managed to take the lead once again through Amy Ridge with a lob for her third goal.

It was Ridge who took the Aussie Stingers back into the lead at the end of the first quarter for 4-3. Australia went to 7-4 before Marta Bach pulled one back from a long cross pass on extra to close the third. Ridge did more damage on extra for 8-5, three minutes into the third period before Spain struck gold.

Three minutes into the final period Spain leveled for the third time through Matilde Ortiz at center forward. There was desperate defense at both ends and it came down to a shot in the dying seconds from an unguarded player at the point that led to the winning goal. Palm tipped the ball left and Spain had another attack.

It sped out the top to Beatriz Ortiz, who made no mistake with the winner less than four seconds from time. Australia’s shot was smacked down and it remained winless after three matches. Both teams started with No 13 in goal with Gabriella Palm staying the course and Elena Sanchez being replaced early in the second quarter. 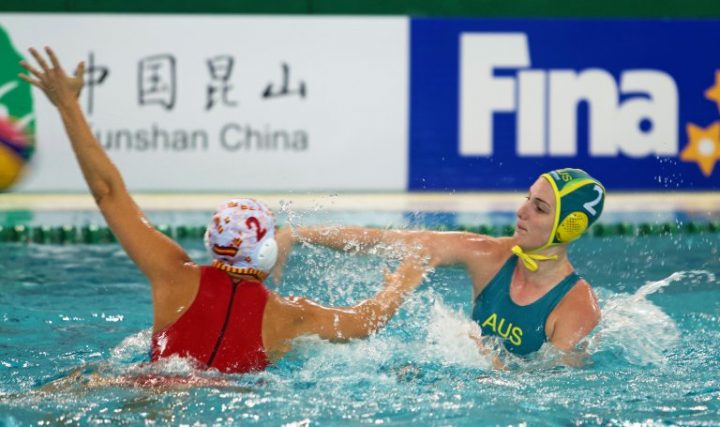 The Netherlands secured group supremacy with a tough victory against a determined China. The 5-2 second quarter set the team up to work through the final two quarters and claim the all-important top spot.

China leveled twice in the opening quarter and the Maud Megens claimed her second from the top on extra to set the ball in motion. Catharina van der Sloot sent one in from the left-hand-catch position, hitting the wood and bouncing in off the goalkeeper’s back. Iris Wolves netted three minutes later and the Netherlands was 5-2 ahead.

With a pair from Guannan Niu and Huan Wang — on extra and from the top —China was back in the game at 5-4. However, Vivian Sevenich increased the margin and the Dutch gained a three-goal buffer when coach Arno Havenga called a timeout with less than six seconds remaining and engineered a shot with van der Sloot netting in the last second. It went out to 8-4 at the start of the fourth, but Dan Yi Zhang scored twice in two minutes. Megens converted a penalty for her third at 2:10 for 9-6.

ing Zhang opened the fourth-period scoring and Genee responded. Van der Sloot could have made it a four-goal advantage except for hitting the crossbar on penalty at 5:47. China’s expeditions into Dutch waters were fraught with errors and lost balls while at the other end the Netherlands peppered the goal with Number 13, YiNeng Shen, stopping a handful and the defense chipping in with deflections in what was a low-fouling match.

One of Netherlands’ many attributes was snapping up the loose ball quickly, creating many chances. China put a couple on target in the dying minutes, only to fall to the Dutch and not conquer and create a three-way tie at the top. Three quarters equaled and just that one blowout was the difference in the match. The quarterfinals should prove most interesting. 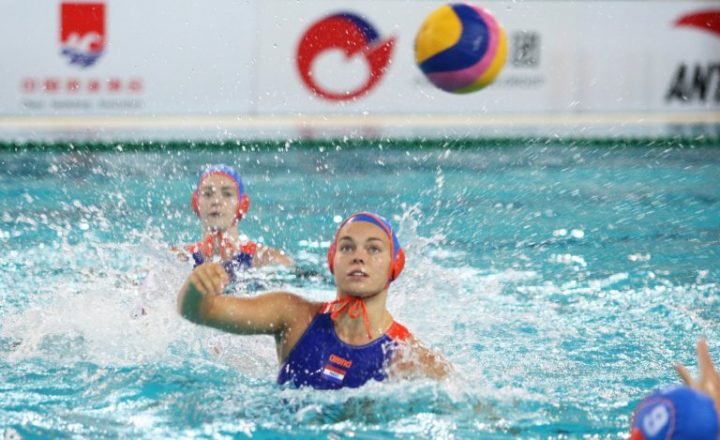 The USA kept a clean sheet in the round matches with a strong win over Russia and built mainly on the extra-man attack, two penalty strikes and forcing errors.

Russia had the worse of the contra-foul situations and allowed the USA to score six from eight on extra, a magnificent conversion in any level of the game. Russia worked well to match the USA in the opening quarter, leading 2-1 thanks to the effervescent Evgenia Ivanova.

Stephanie Haralabidis scored in action with two minutes remaining for the equalizer. Two more goals for the USA in the third gave a small advantage. A three-goal burst in the third set the tone for the USA, but Russia pulled it back to 6-5 before giving up two late scores from Melissa Seidemann and Kiley Neushul.

Goals were traded in the fourth with Anastasia Simanovich bringing it to 9-7 at 4:08, close enough to force a shootout. However, two minutes later, Paige Hauschild converted the sixth extra for the USA and the match was decided. 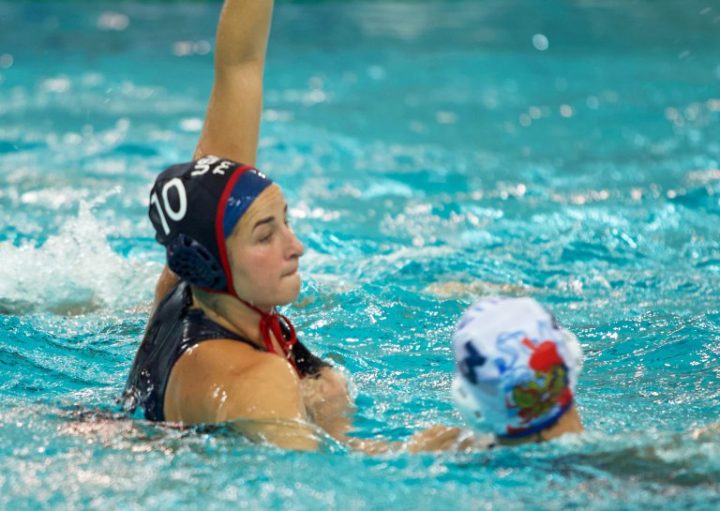 It was Canada all the way until the last minute of the first half when Yumi Arima burst the banks with Japan’s first goal when already eight behind. It was a quick conversion of extra-man attack that caught Canada off guard.

Previously, Canada enjoyed a solid flow of goals with Monika Eggens with three, captain Krystina Alogbo with the second and third from center forward and fellow two-meter player Elyse Lemay-Lavoie netting twice, either side of Arima’s effort.

Japanese captain Kotori Suzuki (penalty) and Arima scored back-to-back goals to trim the difference to 9-3 in the third before Canada finished the period at 11-3 through Axelle Crevier on extra and Kindred Paul from the penalty line. For Japan to level the quarter after a torrid first half was some redemption.

The tightness continued in the final quarter, although Canada did spray some open goals, which could have made the margin even bigger. To lose by only one goal in the second half is was what Japan is capable of in the top echelon. 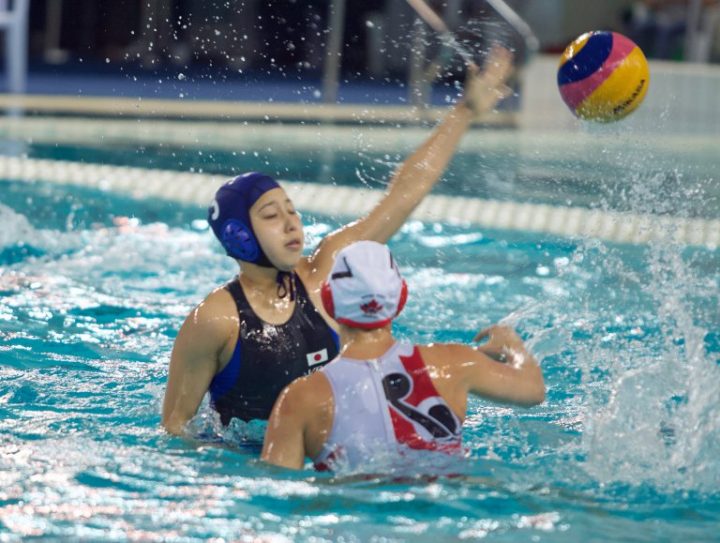