USA jump into semi-finals with win over continental rivals 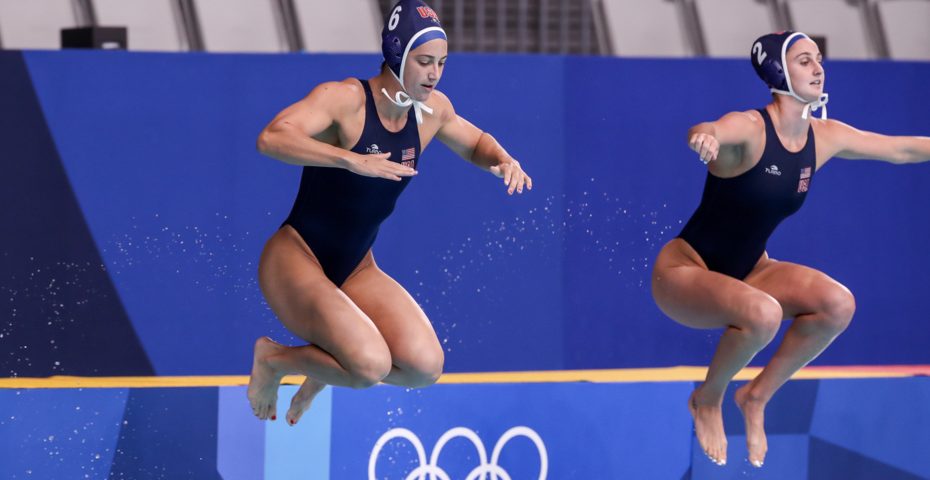 The USA have booked a date with either Australia or the ROC in the semi-finals of the Olympic games after comfortably beating close neighbours, Canada.

Adam Krikorian’s started in a formidable fashion, taking a 7-1 lead in the first quarter, and the reigning champions never looked back.

Canada were looking to reproduce a performance like that of 2004, where they beat the USA in Athens in the group stage, however, an inspired defensive shift in the USA’s goal from Ashleigh Johnson gave the Canadians little hope.

It was a clinical display from the USA, who have recovered excellently from that Hungary defeat, but their biggest plus from today is how solid they looked at the back. It will take much to beat this American defence for either Australia or ROC.

The USA enjoyed a lightning-quick start out of the blocks, scoring five goals in a row. They took the lead with the first attack of the game. Rachel Fattal won the sprint and put the ball straight into the pit to win the USA a penalty. Maddie Musselman, who only had eight going into this game, converted the penalty to grab her first of the game.

Makenzie Fischer then added another for the USA just moments after from just right of the penalty spot.

Shae La Roche and Monika Eggens both had chances for Canada, but goalkeeper Ashleigh Johnson dealt with the threat in a typically comfortable style.

Musselman then added her second of the game from an extra-player situation. Gurpreet Sohi was the guilty party, and UCLA’s driver made it count.

Kyra Christmas, Canada’s left-handed superstar, then tried to lob Ashleigh Johnson, but her attempt was in vain. Canada then regretted it as Alys Williams firstly scored on the left with a lovely take on the drive, before Aria Fischer compounded Canadian woes with a lovely leaning goal from the centre.

The Maples finally scored their first from Shae La Roche’s driven shot which was straight at Ashleigh Johnson. The NC Vouliagmeni keeper made an uncharacteristic mistake as the ball slipped through her grasp. But it didn’t really matter, as Maggie Steffens, the new all-time Olympic goal scorer, netted twice in as many minutes to put Canada’s hopes of progressing to the semi-finals somewhere close to zero.

It’s not often that a game is essentially won in the first quarter, but that’s what we were looking at going into the second period.

Axelle Crevier was excluded perhaps harshly from the pit, but the USA were not in a forgiving mood. Makenzie Fischer converted the man up with a powerful shot to Clara Vulpisi’s right-hand side.

Gurpreet Sohi had a great chance to get one back for Canada on a man-up, but her shot from 4m was saved excellently by Johnson. Canada did, however, score their second of the game when Claire Wright pulled off a perfectly executed lob from close range.

They were a long way behind, but there was no doubt Canada were growing into the game. Joelle Bekhazi was denied only by another top save from Johnson in the American goal. Only a rocket of a cross-cage shot from Shae La Roche could power past Johnson to pull another back for Canada.

But the USA were clinical, and second goals for Alys Williams and Rachel Fattal, as well as a score from Kaleigh Gilchrist, made the score 11-3 at half-time.

Canada will be satisfied that they stopped their rampant opponents from scoring in the third period, but the USA could happily afford a goalless quarter when they led by eight from the previous period. 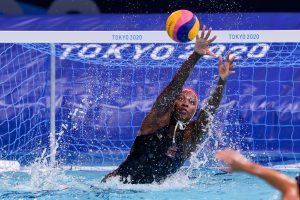 Emma Wright was working hard at centre-forward for the Canadians, but her side simply couldn’t find her under the relentless defensive pressure from the USA – Canada were really struggling to gain any sort of attacking flow.

Kindred Paul forced yet another solid save from Johnson with four minutes to go in the third. It was the American’s twelfth of the match, highlighting the quality of skill this young goalkeeper has.

Speaking of excellent keeping, however, Clara Vulpisi pulled off three superb saves in the last minute from Musselman, Haralabidis and a particularly good one from Alys Williams.

into the fourth, Axelle Crevier managed to sneak one past the USA’s substitute keeper, Amanda Longan, at the near post. But Maggie Steffens couldn’t help but fire home from 3m from Steph Haralabidis’s delightful floating pass.

However, Canada were determined to restore some pride to the scoreline, and Hayley McKelvey did just that with a powerful shot into the top-left corner of the Longan’s net to make it 12-5.

Haralabidis, USA’s left-hander. finally got herself on the scoreboard. The Greek-born number seven fire a low, bouncing shot past Vulpisi from Bekhazi’s exclusion.

Elyse Lemay-Lavoie was then wrapped from two exclusions in two minutes – with Aria Fischer and Alys Williams converting both. The younger of the two Fischer’s, Aria, then continued her good scoring form in the game to seal the deal for the Americans.