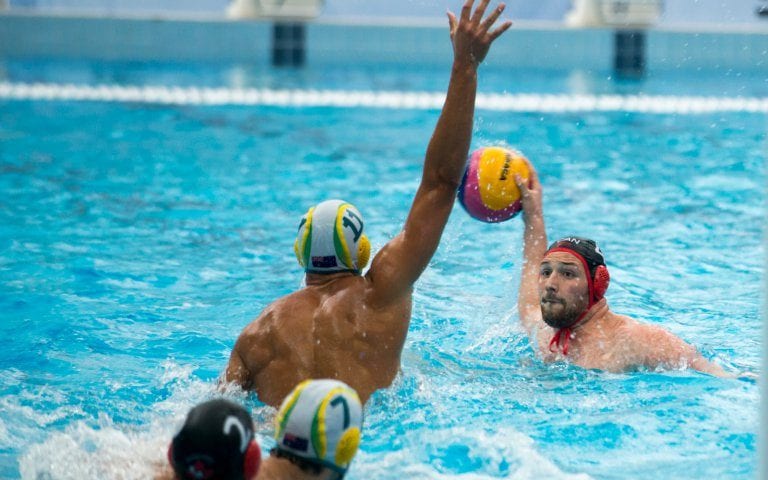 Australia and the USA remain on track to meet in the final of the men’s World League Intercontinental Cup in Auckland after wins against Argentina and Japan on day 3. Hosts New Zealand enjoyed a good win against Saudi Arabia and had the crowd cheering the first home victory of the tournament.

Six Australians were among the scorers in the first quarter as they wracked up seven goals, with impressive center forward Joe Kayes scoring twice. Leading 7-3 after the first quarter, Australia were matched by Argentina in the second, each scoring three times with Kayes picking up his third as the Aussies went into halftime 10-6 ahead.

Australia’s superior outside shooting was too the fore in the second half, with Aaron Younger and Andrew Ford both scoring, Ford finishing with three goals. Argentina struggled in the final quarter, especially when Ramiro Veich was rolled for misconduct after being excluded for holding on Kayes. Australia capitalized and finish the quarter with four goals to none, beating Argentina 16-7.

“Australia are a difficult team. We knew that but it was a game we will use to improve how we play. It was a hard game but a good game for us.”

“I’m happy with the result, with the win, but my preference is defense and there we can be better. It wasn’t easy after last night’s game but the response from the players was great.”

Canada’s captain, Nicolas Constantin-Bicari, led the way with a tournament-high seven in his team’s 20-9 rout of New Zealand’s second team. It was a bit of a blow out form the start with Canada leading 5-2 at the end of the first quarter, but Bicari did the damage in the second and third quarters when he scored three goals in each. It wasn’t a one-man show though as Devon Thumwood finished with four and Gaelan Patterson picked up three.

But it wasn’t all Canada, with the young Kiwis showing they can find the back of the net too, Nicholas Stankovich finishing with a satisfying three goals while Ryan Pike and Rowan Brown each got a double.

Japan set the tone for this exciting match with two early goals against the USA before the Americans fought back to finish the first quarter level with three goals each. Seiya Adachi picked up two of Japan’s goals just as Alexander Obert nabbed two of the USA’s three.

It was only in the second quarter when the USA were able to edge ahead, winning that period 4-3 with goals to Hanners Daube, Alexander Bowen, Chancellor Ramirez and Maxwell Irving. They had a two goal advantage till just a few seconds before the end of the quarter when Yusuke Inaba drove a shot home to close the gap to one.

USA keeper Alexander Wolf made a crucial penalty save midway through the final quarter with his team ahead 11-9 after a goal to Ben Hallock. Soon after his coach, Dejan Udovičić was ejected from pool side after he’d been yellow carded in the second quarter. But a Johnathan Hooper goal gave the USA a three goal advantage – their biggest lead of the match. Japan did get one back but the USA continued their unbeaten run, winning 12-10.

“Japan play differently to most teams so we have to communicate a lot more and not let in easy goals which we failed initially to do. Offensively we missed a few opportunities early but we got a lot better. On the chance of playing Australia in the final. We played Australia last week but both teams are different this week. It’s always going to be competitive against them.”

New Zealand started strongly with goals to Iosefa Tuiasau and Matt Lewis but missed chances too. Ahead 2-1 Anton Sunde hit the post from virtually beside it. Saudi Arabia made the most of their chances with two goals to captain Khaled Alharbi and another to Adil Almalki to lead 3-2 at the first break. New Zealand had chances in the second quarter too and thought they’d scored late in the half but took the shot from in front of the foul.

Alharbi was strong again for Saudi Arabia, scoring his third goal. It was effectively a two-point goal as he’d scored from a turnover from a missed New Zealand shot and gratefully took a long pass to score off. Sunde got one of New Zealand’s two goals and Lewis picked up a second as the Kiwis went into the half trailing 4-7 with Bader Aldughther scoring twice. Matthew Bryant closed that to 5-6 almost straight away. He had another game disallowed later in the quarter for a big rugby-type fend before shooting. Lewis had picked up his third goal and Aldughther scored off the post before Bryant found the back of the net for this second of the quarter.

New Zealand went ahead with a goal to Matt Morris and went into the final quarter leading 9-8. Two excellent goals to Sean Newcombe and Sunde extended that lead to 11-8 with then Tuiasau scored his second and the Kiwis were ahead by four. When Liam Paterson scored without a defender in sight New Zealand led 13-8 and had the result in the bag. They finished with a flurry to win 15-9.