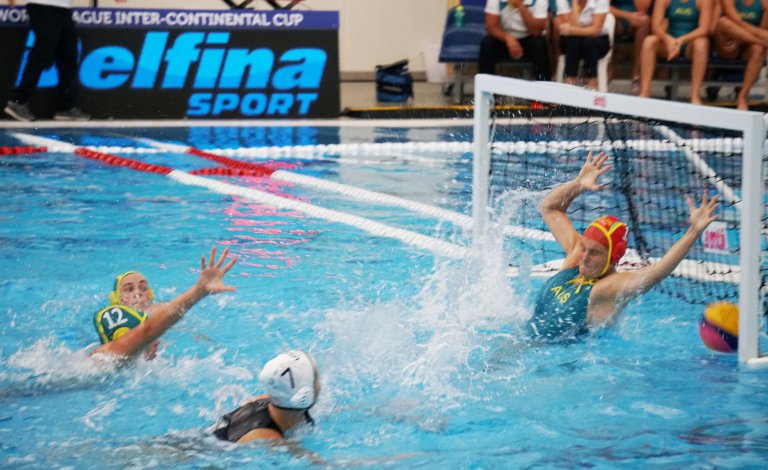 Canada and Australia have finished top of their respective pools in the women’s World League Intercontinental Cup in Auckland and will take on the two New Zealand sides in the quarterfinals.

Australia thrashed New Zealand’s second team 20-2 in day three action while China beat the top New Zealand side 10-5. China finished second behind Canada in pool A and will play Kazakhstan in the quarterfinals while the USA, who enjoyed a 13-6 win against Kazakhstan, take on Japan.

Australia had their eye on the tougher games to come when they played out what was effectively an opposed training run against the young New Zealand 2 team. At 20-2 Australia finished the match taking deliberate exclusions so they could practice their 6-5 defense ahead of quarterfinal against the top New Zealand team tomorrow.

They led 7-0 at the first break and the match was over from a competitive perspective by then. New Zealand got two goals in the third quarter but the relentless pressure from the Aussies was too much. Amy ridge finished with five goals and Morgan Baxter four, while seven players got on the score sheet for Australia.

“The coach wanted us to play defense so we went a bit heavy toward the end there to work on our extra man defense. We’re looking forward to playing New Zealand’s top side and we feel like we’re playing well. The USA game was a tough one (which Australia won) and the next two were steady so that allowed us to try a couple of things. We’re looking forward to playing New Zealand in front of their crowd.”

Kazakhstan gave the more fancied USA a bit of a fright in the first quarter, scoring four goals to go into the break trailing 6-4. USA captain Melissa Seidemann was frustrated at her side’s defense, but pleased that they were able to shut Kazakhstan down in the second quarter, when they outscored them 2-0, and carried that defense through to the second half, which they won 5-2.

And there wasn’t much wrong with the USA’s attack as they finished with a respectable 13 goals, sharing the scoring among seven players with Valeria Ayla, Jamie Neushal. Stephanie Haralabidis and Kaleigh Gilchrist all scoring twice and Abrielle Hill whacking home three goals. Despite the sloppy opening defense, the USA never really looked like losing and led 8-4 at halftime and won by sevens goals.

“We’re proud of ourselves and our defense, and in the first quarter we were not up to standard and Kazakhstan took advantage of our mistakes. This team hasn’t played a lot together but we’re learning each other’s tendencies and play. Hopefully we’re improving with each game.”

Canada was forced to work hard for their win against Japan with a series of turnovers in the final few minutes adding to the drama of what should have been a more straightforward win. Japan created plenty of opportunities, but convert to many of them against a Canada team with the hot-hand of Monika Eggens. She scored a tournament high seven goals and has 15 for the tournament.

Captain Krystina Alogbo isn’t far behind after picking up another four goals, while Japan’s Yumi Arima finished with five. It was even at 3-3 after the first quarter, but Canada moved ahead by two at halftime having outscored Canada 5-3 in the second quarter. Japan fought back in the third, scoring five goals, but still trailed 14-11 and Canada kept the pressure on in a low scoring final period to win 15-13.

“It’s going well for me but I’ve had some good passes and the important thing is that the team wins and we are moving into the quarterfinals. We definitely made mistakes and didn’t completely follow the game plan so we need to refocus for tomorrow.”

China opened the scoring with a goal to Ning Guo but New Zealand brought the crowd to their feet when Nicole Lewis equaled after Brydie Pye and Emma Stoneman had both had cracks at the goal. Xiao Chen gave China a 2-1 lead that Kate Enoka thought she’d equaled only for the referees to call it back for an exclusion. New Zealand’s goalkeeper Jessica Milicich stopped one shot with her face in the first quarter but Chen was too good on the turn in the second quarter, rocketing in her second goal of the match midway through the period.

The highly impressive 16-year-old Morgan McDowall picked up a turnover in the Japan goal but somehow couldn’t convert the opportunity. And the Kiwis missed a prime chance at the end of the half when China’s keeper Yineng Shen was excluded. China led 5-1 at the break and their defense kept New Zealand to outside shots during the third quarter.

They extended their lead to 8-2 with Chen picking up her third goal and the exciting Bernie Doyle adding New Zealand’s second. McDowall got her first goal of the match with about 40 seconds of the third quarter to go, taking the score to 8-3. New Zealand matched China goal-for-goal in the final quarter with Lewis picking up her second goal, the first time she’s achieved the feat in 44 tests. China finished comfortable winners, 10-5, on the scoreboard, but New Zealand were in the contest for much of this match.

“It’s the first time I’ve scored two goals in a match but I can’t claim the credit for those goals. It was a team effort. I was just on the end of the passes. We don’t play a lot of international matches and with these games we are going from strength to strength. China are a top team and we’re matching these top teams.”