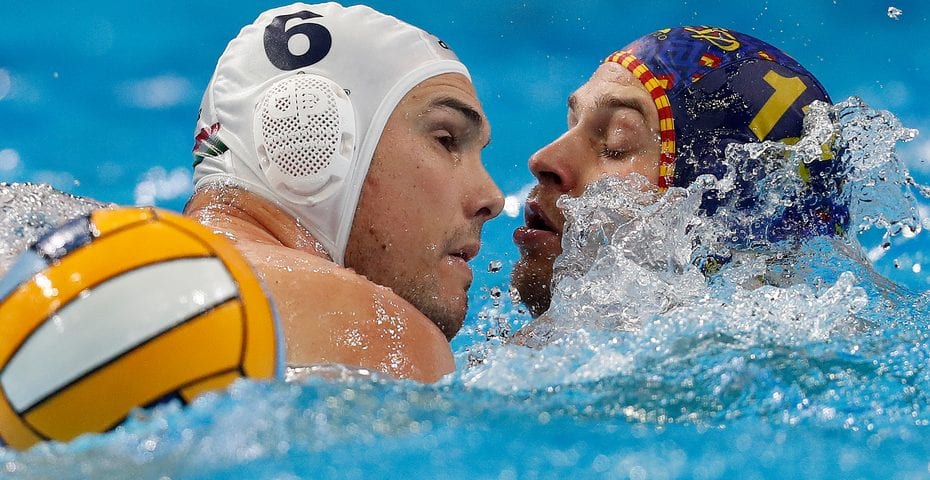 Two big derbies closed the second day of the male tournament at the 34th European Championships in Budapest.

Hungary and Spain shared the points in an encounter which offered a lot of excitement– 11:11, so probably the goal-difference will decide the first place in Group C. After two rounds, Spain is in advantage. In the last match, Spain will play against Turkey, while Hungary will face Malta.

Croatia edged Montenegro 11:10. The Croats had a 5-goal advantage after the third quarter, but they had to struggle to save a win in a thrilling finish. In the end, they cemented the top spot in Group A and secured the quarterfinals.

If there are no surprises on Day 3, Serbia and Italy will remain atop of their respective groups and will join Croatia in the quarters.

Montenegro gained a 1:0 lead, but quickly after, Croatia took control and went 3:1 up early in the fourth. Montenegro came close in the 10th minute (2:3). Then Croatia netted three unanswered goals for a comfortable 6:2 lead two minutes and 20 seconds before the end of the second half.

At halftime, the Croats were 6:3 up. In the middle of the third quarter, Luka Loncar converted a man-up for 7:3. Hrvoje Benic hit the back of the net from a counter-attack in the 21st minute to give Croatia a five-goal lead (8:3) for the first time. It seemed that everything was decided. Croatia kept the 5-goal advantage by the end of this quarter (10:5). However, the Montenegrins started climbing back after the last break. They produced a 5:0 rush and equalized with two and a half minutes to go – 10:10. Even, they had an attack for a lead. 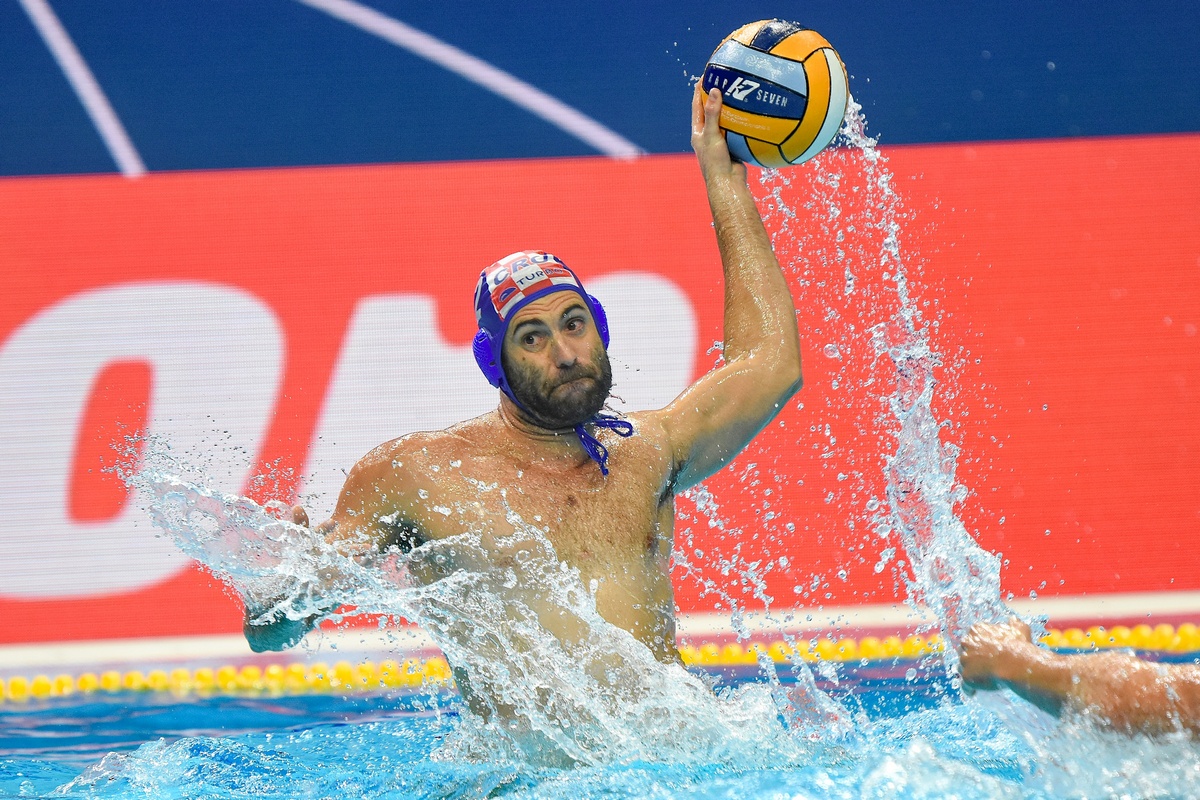 Xavi Garcia netted a winner (11:10) 62 seconds from the end. After that, there were no goals and the Croats kept all three points.

The best scorer was Luka Bukic with three goals. Maro Jokovic, who is usually Croatia’s leading scorer, netted just one goal (of 7 attempts). Montenegro’s captain Aleksandar Ivovic, the best scorer of the 2019 Worlds, didn’t find the net this evening.

Croatia will face bottom-placed Slovakia on Day 3, while Germany and Montenegro will battle for the 2nd place in the group. 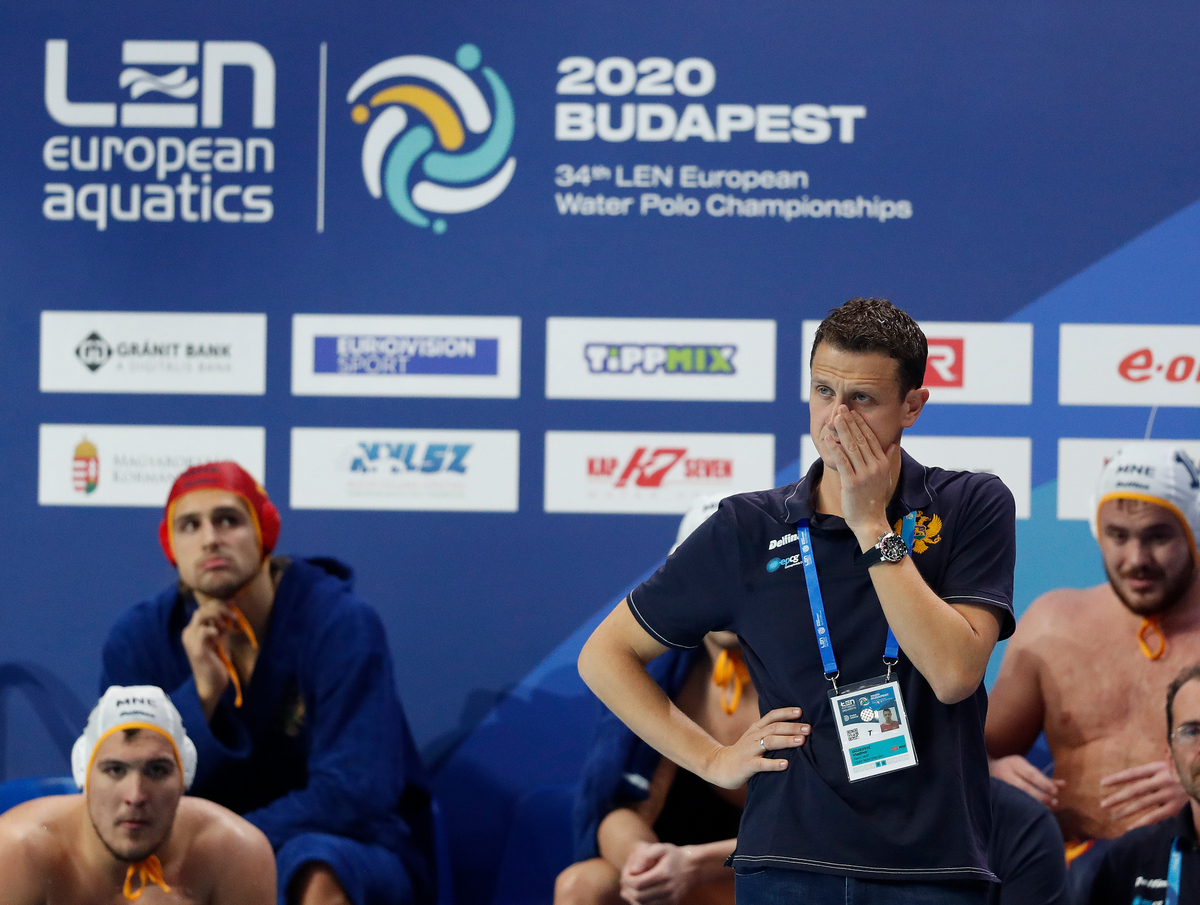 Played in the morning/afternoon session

Hungary’s coach Tamas Marcz surprised the Spaniards, as he started the match with Soma Vogel in front of the goal (instead of the first goalkeeper Viktor Nagy). That proved to be the right solution since Vogel played very well.

Boosted by strong support from the packed stands of the Duna Arena, Hungary opened the game with a 2:0 lead and maintained that advantage until the end of the first period. Spain’s captain Perrone opened the scoring in the second period (3:4). Then Spain had a few good opportunities to equalize, but the Hungarians managed to defend themselves. 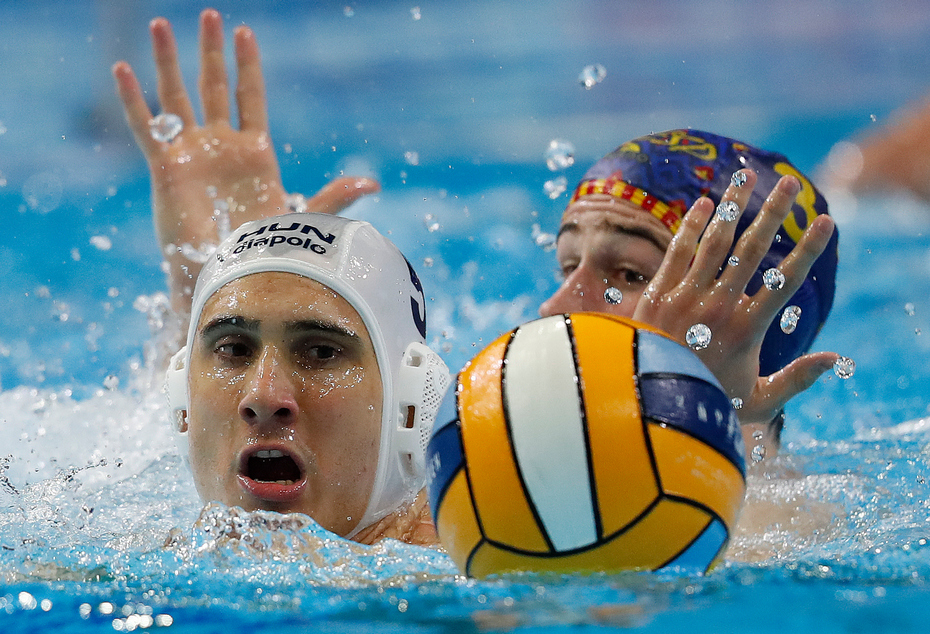 In the middle of the quarter, Hungary forced a penalty shot. Then it happened something unusual. While Manhercz was preparing to shot, Spain’s goalie Daniel Lopez was excluded because he wasn’t in the right position. He was replaced by a field player Alberto Munarizz, who managed to save a penalty shot from Manhercz. It seemed that that save provide the momentum to the Spanish team. But, in the next possession, Munarriz had his shot blocked.

Norbert Hosnyanszky doubled the Hungarians’ advantage in the 15th minute (5:3), but shortly after, Delgado converted a man-up and Spain trailed by a goal (4:5) at halftime.

Hungary was leading 6:4, 7:5, 8:6, but after each of the hosts’ goal, Spain was reducing the gap to one, and it finally equalized in the last second of the quarter. Perrone was preparing to shot. The Hungarians’ were ready to block his shot. But, Perrone did the trick, and instead of shooting, he passed the ball to Miranda, who netted an equalizer-8:8. 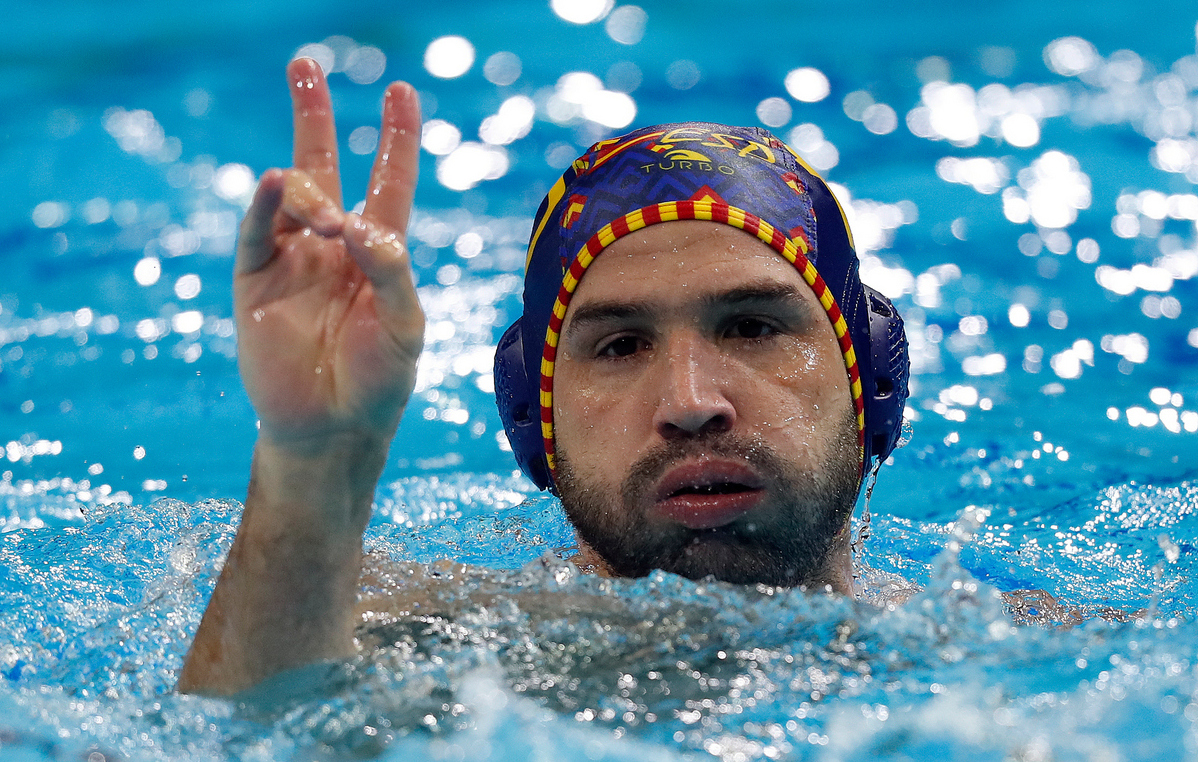 Granados gave Spain the first lead (9:8) in the 26th minute, but Hungary equalized very quickly. Denes Varga scored from an extra for 9:9. Then started a tit-for-tat period. Spain was earning an advantage, while Hungary equalized on each occasion. Spain entered the last minute with an 11:10 lead. Forty seconds before the end, Harai leveled the score from a counter-attack, after Spain’s turnover foul. Spain lost the ball in the next possession, and then Hungary had 15 seconds to secure a win. However, Vamos made a turnover foul with four seconds to go, and the two giants shared the points. 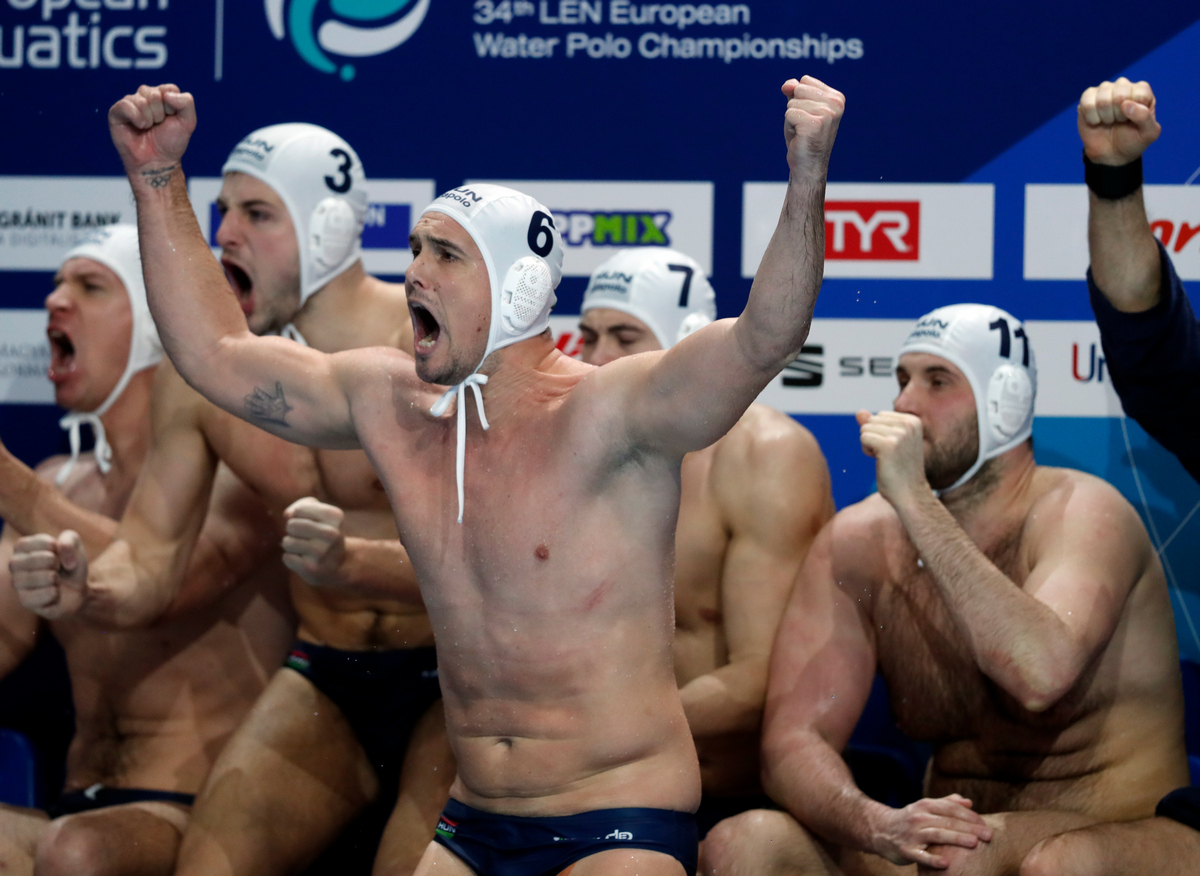 France improved its play after the loss to Georgia two days ago (7:9), but it wasn’t enough for a win over the world champions, who played without suspended Stefano Luongo.

Italy was leading throughout the match. Four minutes before the last break, they earned a 9:4 advantage. But France started climbing back. The French produced a 3:0 series and trailed 7:9 in the middle of the fourth quarter. Two minutes before the final buzzer, Gonzalo Echenique hit the back of the net for 10:7 and decided everything. 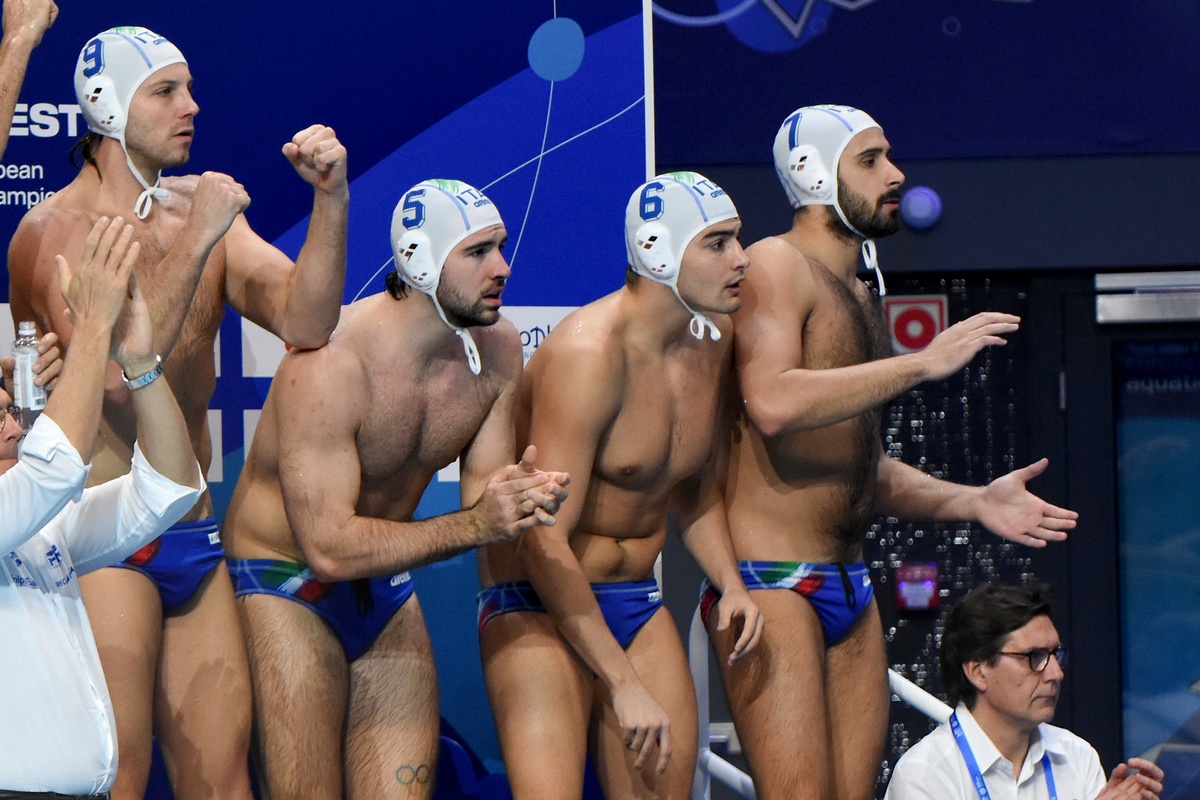 Greece ruled the field until the middle break. A minute and a half before the end of the second quarter, Greece was leading 10:1 and had an 11:2 advantage at halftime, while they increased their advantage to 10 in the opening minutes of the third quarter (12:2). But, after that, the Greeks slowed down, and Georgia didn’t give in. The Georgians produced a 4:0 rush and trailed 6:12 deep into the third quarter. But, Greece didn’t let Georgia go further. Kolomvos closed the third period six seconds from the end with a goal for 13:6. The final eight minutes saw a balanced battle.