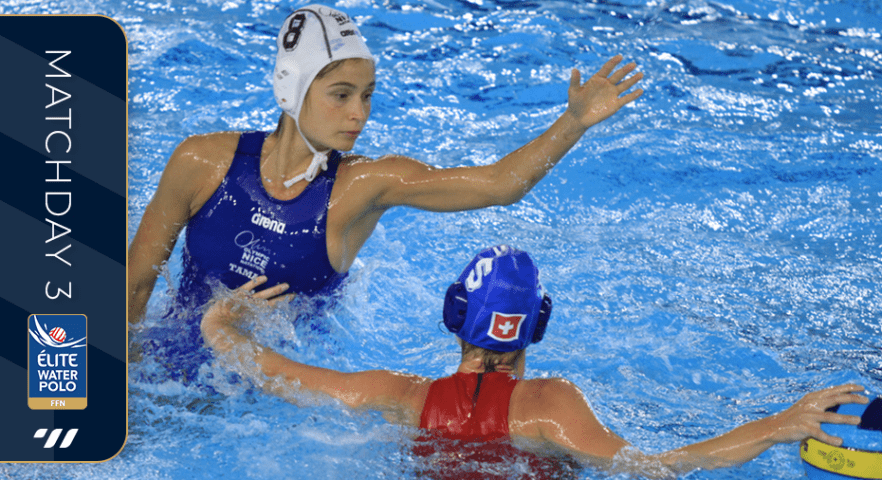 This weekend saw the continuation of a typical match week in the women’s French Championship, with four matches to wrap up October.

Elsewhere, both Lille and Bordeaux were unbeaten coming into their clash this weekend, but there was no doubt that LUC were a class above their opponents on the day, running-out 22-8 winners at the Marx Dormoy swimming pool.  Down on the South Coast, Olympic Nice got back on track after losing to Mulhouse last weekend by beating Switzerland in their double-header bout.

Despite a tight start, the visitors got their noses ahead by three scores at the end of the first, with Forgacs (twice), Jean Michel, Kretzmann-Bahia, Guillet, and Mihaly all finding the target.

Both teams accumulated exclusions in the second quarter, but neither team’s lack of discipline was reflected on the scoreboard. Forgacs, formerly of Szentes and UVSE, bagged her hat-trick, with Guillet also adding another score to put Luca Heurtier’s team 8-4 to the good at half time.

Immediately after half-time, Mulhouse looked to be out of sight, with Lou Jean Michel netting a penalty and Kinga Mihaly grabbing her brace for the side from Haut-Rihn. But INSEP were given a boost after Audrey Daule and Viviane Kretzmann were both given red cards, and a double from Ema Vernoux, as well as an additional score by Camelia Bouloukbachi against her second-registered team, gave INSEP some hope going into the last (8-11).

But despite INSEP’s best efforts, they couldn’t break any further into Mulhouse’s lead, conceding a goal every time they managed to pull one back. A red card was shown to Tiziana Raspo, making her the third player to receive one. In the final period, Ema Vernoux, Lili Forgacs, and Louise Guillet each scored their fourth goals of the game.

Gabriella Fitaire, Erica Hardy, and Veronika Kordonskaia each scored a hat trick for Lille, which led to the team’s impressive fourteen-goal victory over Bordeaux. Nikki Meijer also scored a quadruple for Lille during the match.

The defending champions’ coach for the day, Clara Baetens, guided her team to a dominant performance in the second quarter, which set the tone for the rest of the game. The extra-player opportunities that Lille took advantage of were executed with a much greater degree of precision.

The weekend saw Nice complete a weekend sweep of Switzerland, despite the fact that Nice’s path to three points was very different in each of the two games.

Nice were absolutely dominant in the first game; Ilario Di Bartolo had an absolute field day in front of goal, netting six times—half her team’s scores in the match. Switzerland barely looked like scoring in the first game.

In the return fixture on Sunday, however, the match was much closer. The teams were practically unchanged from the day before; the Swiss were much better, but it’s fair to say that Nice were understandably more relaxed in the second match-up.