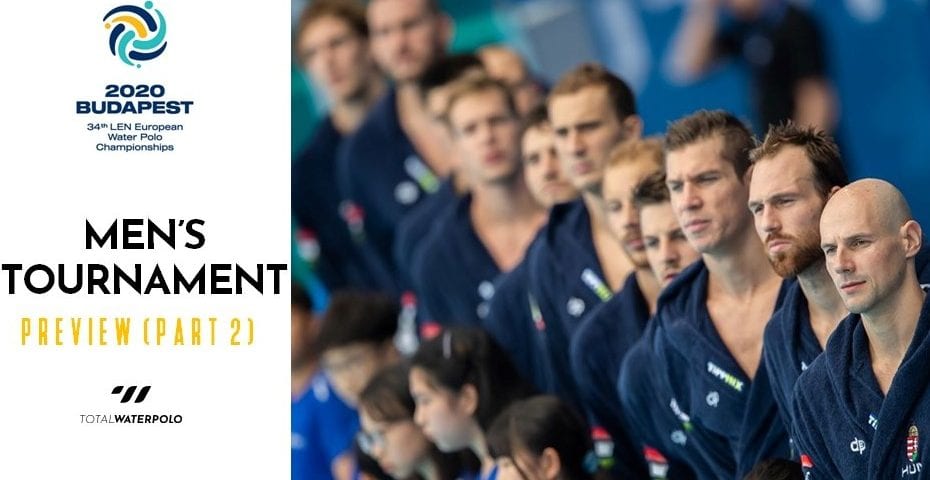 Total Waterpolo completes a three-part preview of the 34th European Championships. Today’s article focuses on the teams which will try to halt the South Slavic domination at the continental championships.

We present the groups C and D, which features Hungary, Italy, Spain, Greece.

Hungary and Greece have two objectives – a medal and the Olympic berth. Italy and Spain will hunt “only” for medals, as they have already qualified for the Tokyo Olympics, as the finalists of the 2019 World Championships.

Hungary is the most successful country in the history of water polo. The Hungarians won 12 gold medals at the European Championships, while they captured six silver and six bronze medals. They are 9-time Olympic and 3-time World champion.

Hungary, which played the most matches in the history of ECH (214 games) won eight gold medals at the first ten editions (1926 – 1962) of the Europeans, but they are waiting for a new title since 1999.

Two years ago, Hungary disappointed water polo fans, as it finished 8th at the ECH in Barcelona. That was their second-worst ranking at the continental championships (after 9th place in Bonn in 1989).

Budapest has been the host of the numerous big water polo competitions, but the Hungarians haven’t managed to take a gold medal at the home field in the 21st century. The 34th ECH is the fifth big water polo event in Budapest since 2001. Hungary clinched silver medals at the 2014 Europeans, the 2017 World Championships, and the 2018 World League Super Final, while it finished 3rd at the 2001 European Championships.

The home team wants to break this series of losses in the big finals in Budapest. But, firstly, they have to get into the gold medal match.

-We are yet to qualify for the Olympic Games, and we need to finish in a good position to obtain the quota. But we go for more. We want to win the title here. I feel the strength in the team to achieve that- Denes Varga, Hungary captain, said before the Championships.

Spain was the Olympic champion (1996) and the World champion (1998, 2001), but it has never clinched the gold medal at the European Championships. The Spaniards were very close to the title in Barcelona two years ago. The final match against Serbia went to a penalty shootout, but the Serbs celebrated a 12:10 win. Last year, the Spaniards reached the final of the World Championships. They were defeated by Italy 5:10 after they ousted Serbia and Croatia in the quarterfinals and the semifinals. In the last few seasons, Felipe Perrone, Dani Lopez, Alvaro Granados, Blei Mallarach and friends have been proving that they can reach the highest step of the podium. The tournament in Budapest is their big chance!

The derby of the group is scheduled for January 16th when Hungary and Spain will face off. Hungary celebrated a win in their previous encounter, at the 2019 World Championships. Playing without injured Denes Varga, Hungary defeated Spain 13:11 in the group stage in Gwangju. But, later Spain clinched the silver medal, while Hungary finished 4th.

Malta and Turkey, the two lowest-ranked teams at the previous two Europeans, are far from the Hungarians and the Spanish side. The facts and the statistics speak for themselves. Malta still hasn’t recorded a win at the European Championships. Its biggest success was 15th place in Belgrade 2016 when they debuted. Malta avoided the last place, as it defeated Turkey in the match for the 15th place. The encounter was ended in a draw (10:10), and Malta was better after a penalty shootout. Two years later, in Barcelona, Turkey and Malta again faced off in the match for the 15th place. That game also ended with no winner (7:7), and Turkey grabbed the 15th place after a shootout.

Turkey’s goalkeeper Atila Sezer is the oldest player at the tournament (born on September 10th, 1975).

Without any doubt, World champion Italy and Greece are favorites for 1st place in this group and the medal contenders. However, their rivals in the group stage France and Georgia might upset the strong teams.

Italy has been a regular semifinalist at the significant world and continental competitions in recent years. Since 2010, they have reached semifinals 16 times in 21 tournaments. The gold medal at the 2019 World Championships (Italy’s first gold after the title at the 2011 WCH) is a big encouragement for Alessandro Campagna’s team.

Italy has no superstars who are the best players in their clubs, but it has a very balanced and experienced squad. MVP of the 2019 World Championships Francesco di Fulvio, Pietro Figlioli, Gonzalo Echenique, Marco de Lungo are just a few of many excellent players in this team. 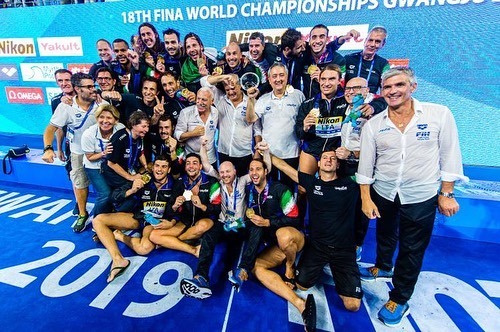 Greece belongs to a circle of the best European teams, but the Greeks still haven’t won a medal at the continental championships. They reached semifinals in 1999 and 2016 and finished 4th on both occasions. The Greeks’ last medal at the major competitions was the bronze at the 2015 World Championships. Last year, they suffered a narrow 6:7 loss to Italy in the World Championships quarterfinals. Tomorrow, the squad, led by Ioannis Fountoulis, Konstantinos Genidounias, Angelos Vlachopoulos, will have a chance to take revenge for defeat in Gwangju. They will face Italy in the first round, and that match will probably decide the group-winner.

France was one of the leading water polo teams in the world early in the 20th century (they won the Olympic gold in 1924), but after World War II, the French dropped to the “Second European league.” In the last few years, they started coming back. France was 12th at the previous European Championships, they didn’t qualify for the World Championships in Gwangju, but the comeback started with the big success in the club’s competitions. Marseille won the 2019 LEN Trophy. This achievement is a high impulse for the national team.

In the last few years, Georgia has reinforced its national team with a few experienced players from the best European water polo countries (Serbia, Croatia, Montenegro, Italy). The Georgians have an experienced squad, which might be a surprising team of the tournament.