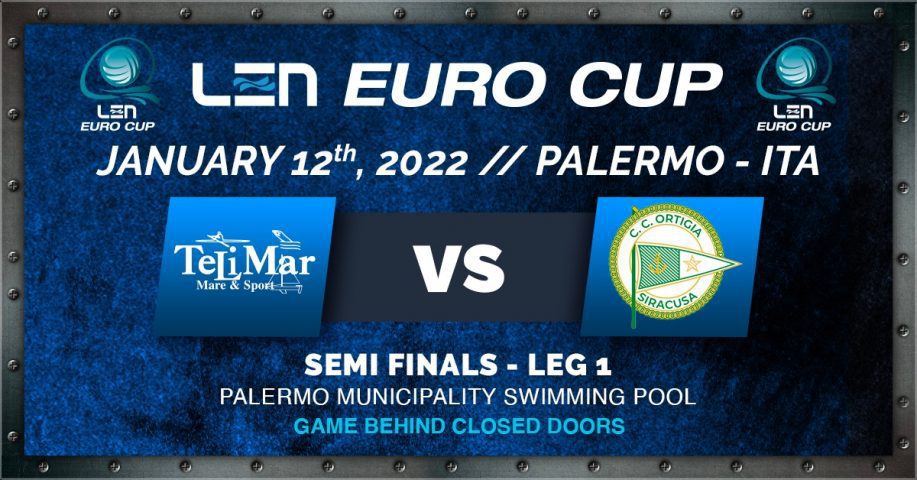 LEN decided on the first match of the LEN Euro Cup semifinals between Telimar and Ortigia, which was suspended two days ago. Ortigia didn’t arrive in Palermo because nine players tested positive and local health authorities placed the rest of the team in quarantine. The match was put on hold.

A win with a technical score of 10:0 was awarded to Telimar.

“LEN Officials have reviewed the documents submitted in connection with the first leg of the Euro Cup semi-final of Telimar Palermo (ITA) and CC Ortigia (ITA), which was put on hold due to the several positive cases within the team of Ortigia.

Based on the information received, LEN had the only choice to apply the regulations and award the match with a 10-0 technical result to Telimar Palermo.” LEN announced today.

On Wednesday, the same decision was made regarding the Champions League matches OSC – Spandau 04 and Marseille – Crvena Zvezda.  Both games were canceled because of different problems caused by the coronavirus pandemic

OSC wasn’t able to play because it didn’t have enough available players (minimum is seven) due to positive COVID tests. The Budapest-based team repeated testing, but the results didn’t come in time.

Crvena Zvezda didn’t even arrive in Marseille. The Serbs had to have special COVID documentation that French authorities asked for. The documentation wasn’t complete before the flight scheduled for Monday ( they had a certificate from the French Swimming Federation, but didn’t have a certificate from the French Ministry of health, the club said). Therefore, Crvena Zvezda had to postpone its departure to France. When the documentation was finally complete, they secured a second flight (via Amsterdam). But, because of fog in Amsterdam, that flight was delayed. In the end, the Serbs had no choice. They gave up the trip because they couldn’t catch a flight to Marseille. Besides Crvena Zvezda would have played with only nine players if it had managed to come to Marseille.

OSC and Crvena Zvezda have accepted LEN’s decision and haven’t complained to date.

Generally, LEN protocols don’t give possibilities for postponements, especially in a packed season like the current is.

But, Ortigia is anger because of LEN’s decision and issued an extensive statement.

A day before the match, we sent the relevant documentation to LEN, with the reports of the molecular swabs and the mandatory quarantine certifications of the Health Authority. For this reason, it was not possible to be present in Palermo, in compliance with the obligations established by Italian law…

We will ask LEN to check the regularity of the procedures carried out on the day of the match, specifically the certificates of the antigenic test of the athletes of the opposing team, which, as a rule, must be carried out in the morning, on the day of the race. We will ask to verify that the LEN delegates, the referees and the entire opposing team showed up at the scheduled time for the match and waited the 30 minutes necessary, according to the regulations, to ascertain the absence of Ortigia….

Ortigia reserves the right to challenge the LEN’s decision and lodge an appeal with the competent bodies”, Ortigia said, among the other things.

If the decision isn’t changed, Ortigia will face a difficult task to overcome a 10-goal deficit in the return leg, scheduled for February 9.