Evangelos Doudesis: Pressure is our privilege 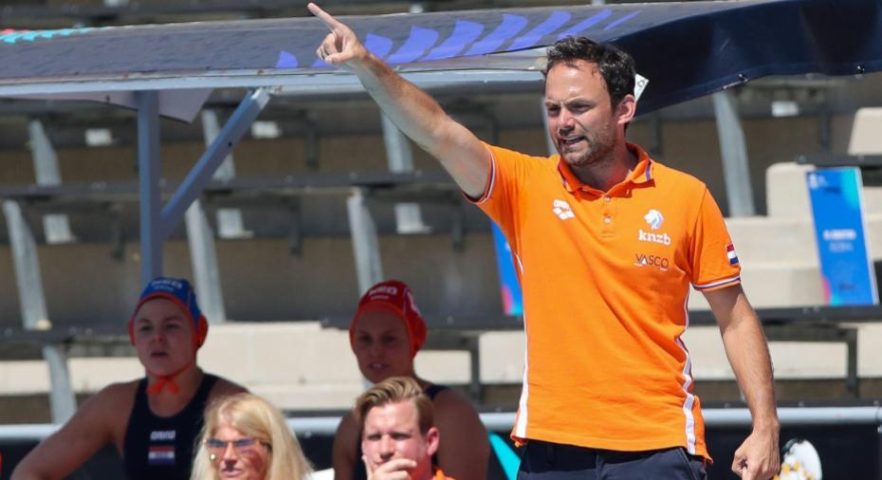 There has never been a more successful women’s team in European Championships history than the Netherlands.

Having won the first three tournaments in 1985, 1987, and 1989, they have now won a total of five times. No team has scored more goals at the Euros than the Dutch, and they are Group Stage specialists, topping their preliminary group an unprecedented fourteen times.

Evangelos Doudesis, the head coach of the Netherlands, has said that all these records only raise expectations for the current group of players:

“The Dutch team is a team with great tradition. Pressure is a privilege. We know this and we like it. The history of Dutch water polo is rich. And we will fight to make that our legacy too. Our expectations in every tournament are high. That said, I am satisfied as long as we improve day by day and learn from our mistakes. If this is translated into a medal, then we will be even happier.”

Doudesis was an assistant coach under Arno Havenga in 2018 when the Netherlands won their most recent European Championship gold in Barcelona. The Greek coach now has the responsibility of shaping the team’s long-term trajectory:

“I am satisfied with the way we have developed until now. We are constantly trying to set the foundations for our long-term goals and, at the same time, preparing for the next major tournament in Split. It’s a demanding season for the players. Maybe the most difficult post-Olympics season ever.”

The decision by LEN to allow 15-player rosters for the European Championships is sure to encourage roster rotation, which is something Doudesis fully endorses:

“It’s been a long season. We are able to use 15 players in a split. We have four new “faces” in the team compared to Budapest. In my view, the national teams should be able to have 15 players available in all tournaments. We are living in an era of pandemics. The level of competition is higher than ever in most tournaments, and there are also injuries and the fatigue factor. Don’t underestimate the fact that all players need to play a game every second day. At the end of the summer, and having already played between 60 and 75 games this season, it’s crazy. LEN made a very good decision based on the progress and the needs of the sport.”

The former Ede Polar Bear head coach knows well that the competition for medals will be intense. Asked to comment on which teams are the biggest favourites along with the Netherlands, he says:

“Spain, Hungary, Italy, and Greece. All of them! We are talking about great teams. All of them have a different way of playing. There is a lot of talent in the water and some great leaders guiding them.”

However, after only a year in the role, the Dutch coach is confident that women’s water polo at every level is rapidly progressing:

Sabrina Van der Sloot: A calm state of mind and managing expectations are key to success.

Sabrina Van der Sloot has been performing at the top level of women’s water polo for well over a decade, and the Sabadell utility player will lead her nation to their sixth European Championships:

“As a team, we are very excited. We have a lot of new and younger players who are looking forward to performing at this high, international level.”

Van der Sloot, who won a gold medal with the Netherlands at the 2018 European Championship and was named tournament MVP, reflects on the miraculous experience that stemmed from her relaxed mindset:

“We started that tournament without expectations and ended up winning. I don’t think that winning the tournament for the MVP title was the highlight for me personally, but more the lessons I took away from it. The lesson I learnt was to enjoy the game and play freely. It was the first time I experienced this feeling of serenity, and I performed my best when I was in that state of mind.“

Despite the positive experiences in Barcelona, the 31-year-old reveals that the team’s goal in Split is not limited to merely bringing home a medal:

“I think our biggest strengths are that our players can play in multiple positions and that we are physically strong. This means that we can play a very dynamic game. But we do not expect to win medals. We expect ourselves to give everything in every game like it is a final. After that, we will see. To have success as a team, as an individual, you don’t need to be outstanding in any aspect of the game. To perform, you give everything and never give up. And then, stay calm in the heat of the moment and enjoy the game”

The 2018 LEN player of the year, who also had two European Championship silver medals (2016 and 2014), agrees with her coach that adding two players to the rosters is the right thing to do:

“As an athlete, I think the programme as it is until the Olympics is very physically very challenging. However, it is great for the sport to have a lot of events, but I do think adding two more players, like LEN decided to do, is a necessary step to make sure the high level of competition can be maintained.”