PODCAST: Doudesis: “The national team is a continuous process” 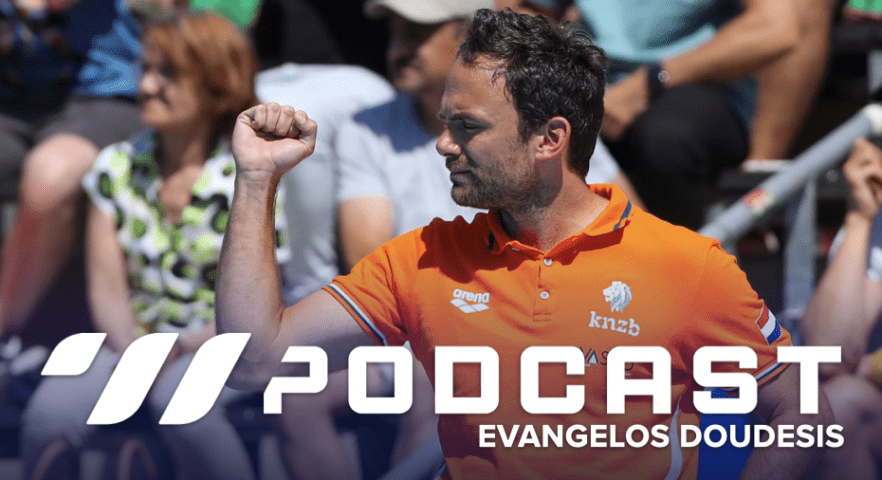 We were delighted to invite the head coach of the Netherlands women’s national team, Evangelos Doudesis, to talk with James on the Total Waterpolo Podcast this week.

Like Vjeko Kobescak (our guest last week), Eva told us that he also did not intend to become a coach:

“In the early stage of my career I was not expecting that I was going to become a coach and I have to be honest that I had  the dream to become a football manager like you know, like trying to connect footballers with clubs football players with clubs and these kinds of things. This was my dream, to be an agent.”

But as a coach, Eva completely changed the fortunes of the Ede Polar Bears. In the show he explains how:

“It was a bad period for the club and you know, it was not the best period of the history of the club. The team ended 2 years in a row the last place of the championship winning I think in total in around four or five games. The team needed a change. The biggest difference is that I tried to establish a top sports culture. We wanted to train more, we wanted to do more, we wanted to expect more from ourselves. I would say that we tried to convince the team to stay humble and stay hungry, have fun and be a better version of ourselves day by day. So this is what we did actually”

The former Greek international then tells us he values growth of players over winning medals:

“I would say that you need to find the right balance by investing time in the young players. It’s the most interesting thing a coach can do, you know, watching a young player doing his or her best and improving day by day and doing things that a week a month a year earlier. Would be like a dream. It’s something incredible. Seeing a young player developing as a player but also as a person is, if I could choose between a medal or this, I would search for the talent.”

In the show, Eva then discusses his views on whether or not his players should stay to train in the Netherlands as part of their training programme, or play professionally abroad:

“I support them to make their own choices. When I took over some months ago we talked with all of them in one of our activities and some of them asked me, what is your opinion about the Olympic season? What do you expect from us? Do you expect us to return back to the Netherlands? I explained that It’s your choice. It’s your choice where you want to develop as a player if you prefer. Staying abroad and playing abroad and returning back when we start the basic preparation for the tournament. We cannot make a choice as coaches for the player where someone wants to play if you prefer to play abroad, yeah, go abroad. If you prefer to stay in the Netherlands, stay here.”

The 36-year-old reveals his aims for the national team going forward:

“I understand that the that our sport is defined from Olympic Cycles. And I I agree and I understand it. But the the national team in my eyes is and continuously process. It’s a continuously process which never stops which never never never never stops. So for me, what is my goal? My goal is to keep the tradition of the Netherland Water polo. To be on the top of the world, in a way that I believe is the right way and the right way is by staying humble staying hungry at the same time and having fun, trying to become day by day better better every day. So I would say this is what I have in my mind of this team and then.”

And finally we couldn’t avoid asking Eva about his conversation with Laura Aarts over pancakes:

“Some months ago when I took over as head coach I was thinking about the future of this team and I thought okay why is Laura Aarts not in this team? How is it possible she is not here?. We talked about it and I got in contact with Laura and I said, let’s spend some time and I’m looking forward to hearing how you’re doing and how are you going with your life? How are you going with your status and how are you going to be set up? We had a sort of date and we thought about going drinking coffee or spending some time at a really nice Pannenkoeken (Pancake) restaurant next to the pool. And then we talked about her future and then I asked Laura  to give me one reason for not playing for the national team. So yeah, she was thinking about it. I told her you can think about it and then we can talk about it in a couple of weeks. So it took her some days, maybe some hours and she thought about it. And she said to me that she missed it, I live for it, and then Laura Aarts was back. But yeah, indeed you’re right I love Pancakes”

Listen to our episode with Evangelos now! All the episodes of the Total Waterpolo Podcast are available on all major Podcast streaming services, such as Spotify, Apple Podcasts and YouTube.
Don’t forget to head over to www.wearwaterpolo.com and use our discount code ‘PODCAST10’ for 10% off your next order