Greece stunned all the favorites and won first place at the European Qualification Tournament for the World League Super Final, which was finished in Debrecen today.

The Greeks convincingly beat Montenegro in the final match.

The match for the third place was perhaps more important than the final because that game decided the third European representative at the Final Eight. The third-place match was a replay of the final of the 2019 World Championships, Italy and Spain faced off. Italy recorded a 9:8 win and qualified for the Super Final in Tbilisi (June 26 – July 2).

So, the European teams at the Super Final will be Montenegro, Greece, Italy, and host Georgia. None of these four teams qualified for the Super Final of the previous edition of the World League. European teams at the final tournament in Belgrade in 2019 were: host Serbia (won the gold medal two years ago), Croatia (finished 2nd), Spain (4th place), and Hungary (5th place).

Montenegro is the 3rd most successful team in the World League history (behind Serbia and Hungary) with two gold medals (2009 and 2018), a silver and two bronze medals. Italy has been a runner-up three times and has one bronze, while Greece has won three bronze medals.

Greece finished in 1st place in Debrecen, and that outcome can be considered a surprise.
The Greeks easily beat France on Day 1. Yesterday, they had stronger nerves in the finish of the thrilling match against Spain in the semifinal. Today, they dominated the final game.

Greece led throughout the game. Montenegro, which was a favorite today, managed to equalize just once – 1:1 in the 5th minute. Greece led, but the game was an even contest until the middle of the second quarter.

Montenegro trailed by a goal (3:4) in the 12th minute. After that, Greece tightened its defense. The Montenegrins couldn’t find the right solution in front of Greece’s goal. The Greeks’ attack didn’t have that kind of problem. Greece scored five goals within seven minutes and jumped to a huge 9:3 lead midway through the third quarter. After that, there was no way back for the Montenegrins.
Ioannis Fountoulis led the Greeks with three goals. Pro Recco’s captain Aleksandar Ivovic scored three goals for Montenegro.

Christodoulos Kolomvos was voted the MVP of the final game. 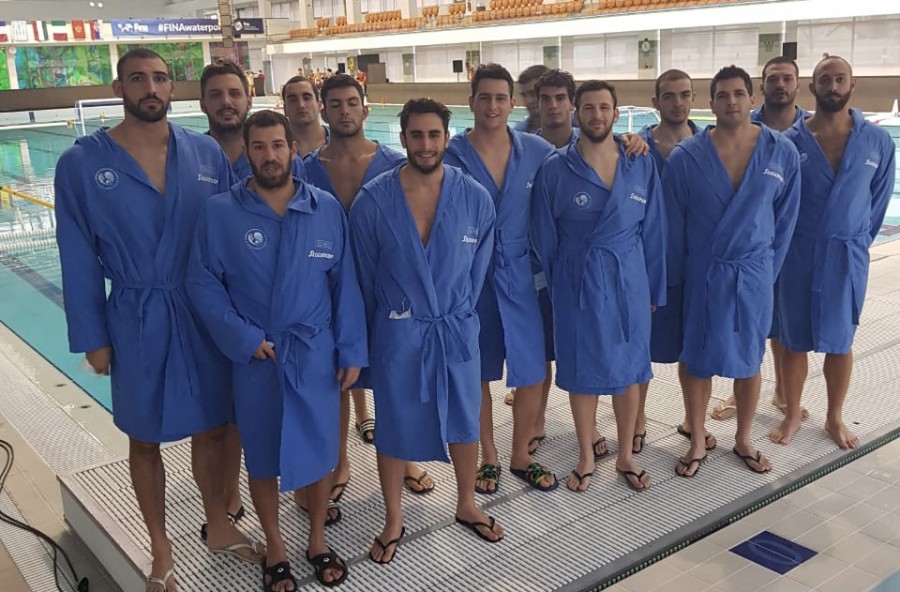 “Greece had an excellent game, they were especially good in defense and that was the key for their efficiency in attack. We had two great games but today our job was even harder without an injured player which limited our rotation. Of course, it’s the Olympic qualification which really matters so we have to focus on that from now on.”

“I’m really satisfied with what I saw from my team, not only today but during the whole tournament. We managed to take a good rhythm against France, which was a tricky game as the first game is always tricky in each tournament but now we started well and the players not only kept the rhythm of the first day but could intensify it and that gave us this victory. It’s great that we could play like this after such a long break and without even club games because of the lockdown at home, it seems that after the preparations and the endless practices the players were really hungry to play matches at last and that had an absolutely positive impact on their performance. But tomorrow is another day, today we won but it will not count any longer and now we need to carry this momentum with us for February, where we want nothing else just to book our tickets to Tokyo.”

Italy convincingly beat Spain (10:5) in the final of the 2019 World Championships. After the opening minutes of today’s match, it seemed that something similar could happen in Debrecen.

Only 93 seconds of the play passed, and Italy already had a 2:0 lead (Echenique and Di Fulvio converted two man-ups). But, after that, Spain kept the world champions goalless for more than 15 minutes. The Spaniards equalized by the end of the first quarter and built a 4:2 advantage during the second period.

Stefano Luongo broke the Italians’ silence in the first minute of the third period for 3:4, Jacopo equalized. Alberto Munarriz gave Spain a new lead (5:4) in the 21st minute, but Luongo responded with an equalizer (5:5).

The fourth period started in a similar way as the 1st and the 3rd – with Italy’s early goal. Gonzalo Echenique netted for 6:5 in the world champions’ first possession in this period. Bustos leveled the score (6:6). That was followed by two power-play goals, one apiece on both sides of the pool (Presciutti 7:6 and Famera 7:7).

Three and a half minutes before the end, the Italians earned a penalty shot (Barroso’s foul on Di Fulvio). Andrea Fondelli sent the ball into the net from the 5m line. A minute later, Echenique scored his 3rd goal this evening for 9:7 and that proved vital for the Italians’ victory. Spain cut the deficit 72 seconds before the end (Mallarach), but the Italians didn’t let the opponent go further. 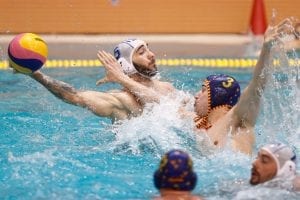 “This was a good game, very tight, a little bit special as both teams missed its best center-forward. We saw great moves and mistakes from the teams which is normal at this stage. I cannot tell you what was the difference between the two teams, I think basically nothing, it was an equal game, Spain also did great. Maybe Echenique’s action goals in the last period were the factors which made the difference.”

David Martin, the head coach of the Spanish team commented:

“Italy has a great team and I’m happy that we had our chance to win this game but I think towards the end we were not fresh enough to block their counterattacks and that was decisive.”

The Olympic and the European champion met for the first time after the semifinals of the 2018 World Cup in Berlin, when Hungary won 12:11. A few months before that encounter, Serbia beat Hungary 8:5 in the quarterfinals of the European Championship in Barcelona. Serbia won the gold in Barcelona, while Hungary took the winning trophy in Berlin.

Today’s encounter wasn’t significant as the previous two were, but both sides were desirous for a win and fought a hard battle.

Serbia got off to a good start and took a 2:0 lead. Hungary got on the scoreboard 21 seconds before the end of the first quarter when Hosnyanszky converted a man-up. Hungary took control in the second quarter. In the 14th minute, the hosts went ahead for the first time (Jansik found the net from a distance for 3:2), but the Serbs managed to regain an advantage. Dusko Pijetlovic beat the buzzer and found the net in the last second of the second period for 4:3.

The balanced battle was resumed after the middle break. Hungary opened the third period with two quick goals and was leading for most of the time in the second half, but the home team’s advantage wasn’t bigger than a goal. The Hungarians did a good job in defense by stopping Serbia’s best scorers Filip Filipovic, Andrija Prlainovic, and Dusan Mandic. None of the three found the net for 29 minutes. But, two of these players scored crucial goals in the final three minutes. Hungary led 7:6 in the middle of the fourth period. Filipovic equalized with a power-play goal three minutes before the end. Andrija Prlainovic gave the Serbs an 8:7 lead in the 31st minute, while Filipovic set the final score shortly after that.

Croatia arrived in Debrecen with high ambitions. The 7th-place match is something that is far from their goals. Despite all these facts, the Croats didn’t lack motivation in the opening game of Day 3. Croatia thrashed France. Croatia earned a 5:0 lead before France scored its first goal in the 11th minute. After that, the Croats made a new series of five goals and jumped to a 10:1 lead early in the third period. In the remaining time, the Croats extended the margin to 12 and recorded the biggest win at the three-day tournament in Debrecen.

Matches for the final classification (January 10)

The Intercontinental qualifications will be held in Indianapolis (USA), April 26 – May 2. The top four teams will qualify for the final tournament.

Composition of the groups (yet to be confirmed by FINA)